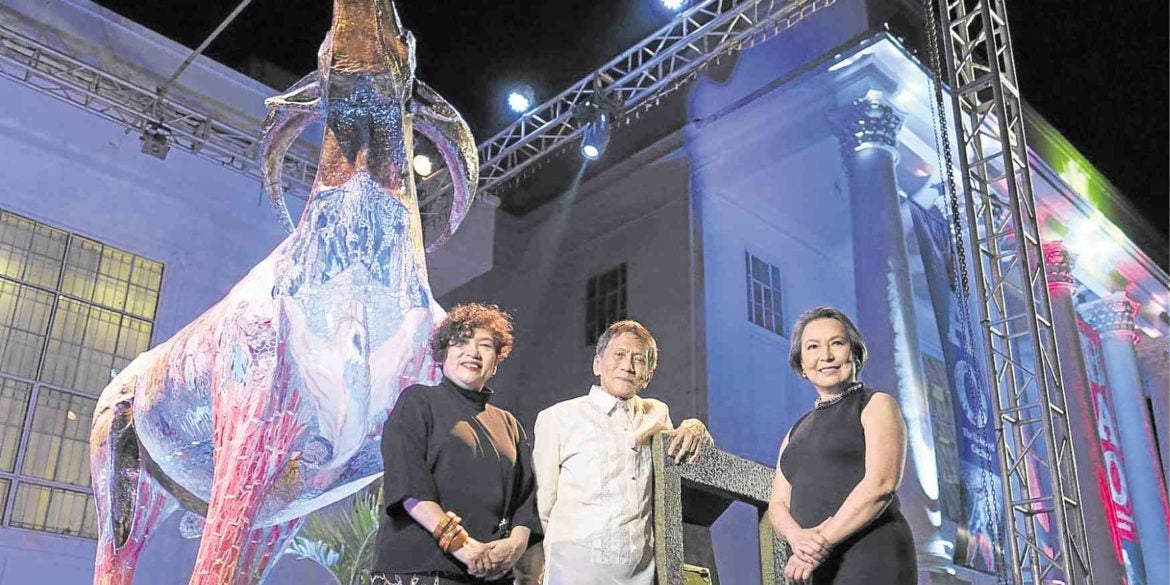 In many of Fernando Amorsolo’s planting rice scenes, the carabao is a perennial presence, pulling a plow or a cart. In Romeo Tabuena’s works, the heft and brawn of the carabao has been transformed into mere ethereal wisps of lines in an imaginary landscape of the mind.

But it took Vicente Manansala, with his distinctive “transparent cubism” technique, to invest the carabao with tremendous aesthetic power, the very image of combustible strength, turning it into a worthy subject on its own.

But without the transcendent power of art, however, that native beast of burden, would remain in one’s childhood memories as a water buffalo happily wallowing in a swamp, caked in mud, or contentedly chewing the cud under the shade of a mango tree.

In the childhood memory of New York resident Angelica Urra Berrie, what she remembers most are the matching pair of carabao sculptures facing the Provincial Capitol Park and Lagoon in her native Bacolod in Negros Occidental.

The sculptures are by the great Francesco Riccardo Monti
—the “Italian sculptor with a Filipino heart”—who also did the sculptures of the Metropolitan Theater in Manila, University of Santo Tomas (where he was professor of sculpture) and the Santo Domingo Church, among others.

Through the Angelica Berrie Foundation, Berrie was determined to make that vision a reality “to rekindle appreciation for the Negrense’s spirit of creativity.” And the one silent witness as well as essential participant in all that significant history is the lowly but noble carabao.

The challenge of giving aesthetic life to Berrie’s dream was presented to a Negrense artist specializing in mosaic, Lisa de Leon-Zayco. Using her own specific medium, De Leon-Zayco conjured in her mind a regal sculpture of a carabao worthy of being borne aloft its own plinth, clad, as it were, in a gleaming carapace of her trademark tesserae, pieces of mosaic that would narrate the history of the Negros sugar industry. Collaborative art can be rife with conflict and tension, and a divergence in vision and goal between the artists can immediately stop the aborning project on its tracks. De Leon-Zayco, however, would have no qualms whatsoever from the start with the only sculptor she was willing to work with: Rafael “Paeng” Paderna, a fellow Negrense. De-Leon Zayco trusted Paderna implicitly, for he was the same art professor under whom, as a child, she had first taken her art lessons. Thus for an entire year did the pair work in a studio especially built for the purpose.

The fruition, the offspring, of this artistic partnership is a massive breathtaking sculptural masterpiece assembled from 363,542 pieces of tesserae, 87 sheets of brass, a concrete behemoth measuring 11.3 meters from nose to tail and ultimately weighing a whopping five tons.

Hence, the sculpture was affectionately christened “Bao,” a most charming sobriquet that identifies this cultural landmark and inevitable selfie destination. Finally installed on the front grounds of the newly refurbished Negros Museum, “Bao” proudly stands as a sentinel to the bastion of Visayan art and culture, as well as an invitation to the local artists and community “to combine their energies in celebrating heritage through art.” Regarding this largesse to the Negros Museum, Lyn Gamboa, president of the Negros Cultural Foundation Inc., speaks of its benefactor: “An angel has come down to us.”

Concurrent with the unveiling of “Bao” is “Coming Home,” a two man exhibition of the works of De Leon-Zayco and Paderna. Manila-based for much of her married life, De Leon-Zayco had taken a long leave from her artistic vocation. After being based in the United States for close to two decades, Paderna had decided to settle down in his native Bacolod. The confluence of these two renowned Negrense artists, and the magnanimity of the Berrie Foundation, signals the rebirth of appreciation and awareness in the land of their heritage, Negros Occidental.

“Bao,” the Unbowed Carabao, is regarded as “a tipping point for the resurgence of arts and culture” in Negros Occidental. —CONTRIBUTED