Their dreams were dreamt in those fields and mountains | Lifestyle.INQ ❮ ❯ 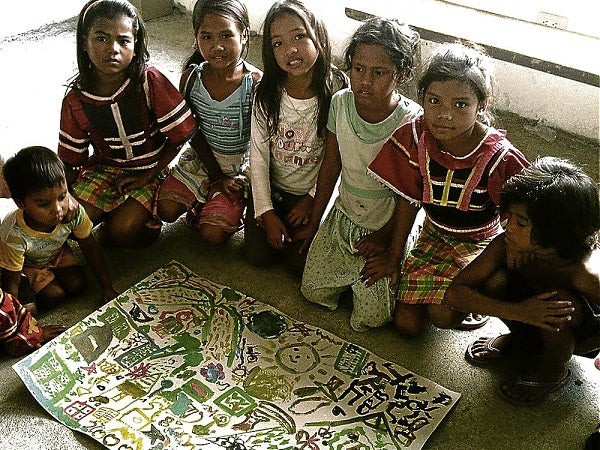 Their dreams were dreamt in those fields and mountains

I see sun, leaves, plants, a nipa hut, and mountains. The carefree strokes, colors, lines—I believe I’ve seen this scene more than a few times. The picture looks like every other drawing plastered on our refrigerator, cubicle and office, a reminder of how our little ones see this world.

We know the picture. It should be familiar. But the familiar is not necessarily comforting, as I realized when I visited Cagayan de Oro on

These people live with the land. Their feet touch the ground—not concrete—every day. Land is precious, as a little girl showed in her painting. She carefully drew stilts for her house. A diagonal line crawls up each stilt. She smiles and says: “Kamote po ’yan.”

On the left side of the drawing is a duck and in the middle area is the rice field. Human figures—children—are happily playing while their elders plant rice. At 8 years of age, the girl knows she has everything she needs—her loving family, fat ducks and hens, and a fertile land.

That is why it was heartbreaking to see another girl paint the idyllic landscape in another way. On the top left upper corner, there are big dots scattered around. She explained, “Iyan po ay ginto at iyan naman ay ang ‘baku.’”

I asked Ida from RMP-Northern Mindanao Organization what it means. She told me “baku” is a construction tractor. On the upper right corner are black paint lines. The little girl noncholantly identified them. “Iyan ang mgatroso (logs), mga kahoy na putol (fallen trees).” There are many round objects painted yellow. “Gold,” she says.

A pink square found on the bottom left part contains with four black dots. “Black gold,” she further explained. This is where the community tries to find gold. They dig and dig.

The little girl knows, along with her friends, that something is terribly wrong. They told me: “Nakiki-usap po kami na sana ’wag sirain ang kabuhayan namin.” “Kabuhayan” is not a means for earning for these children. They know they owe their life and livelihood to their land, and it is their land they should protect. They also know that their mothers and fathers have been offered money for their ancestral lands. Their tribes have refused.

Those who refuse to be bought suffer consequences, as I learned from the stories shared by the older kids in San Fernando, Bukidnon, when we made mask paintings. Most of the kids are able to attend school because of the help of NGOs such as RMP-NMR who choose to live and work with the IP communities.

The masks were filled up easily with symbols and words. The kids pointed at the forehead of the mask and said they want to be educated and to understand different languages. They want to read and write because they have seen a lot could be taken away from them when they cannot understand what is printed on paper.

On the left jaw area of one of the masks, I was surprised to see the word “capitalist.” Investors have already deployed militias to protect properties in most areas. The IP families can’t even plant on their own land. Some have been accused of stealing the investors’ crops.

The tribes have become outsiders in their own home.

Last June 30, 2011, in a small hut in Mt. Manalog in Calabuan, Agusan del Sur, a family was singing a birthday song to their youngest child when suddenly, bullets were fired at their house. The father died. Their second child (daughter) and the birthday celebrant were both hit.

This was the memory of the 13-year-old daughter’s mask. The bullets were drawn on her mask. I stared at the bullet marks on the mask and on her skin. I knew the scar was deeper than what I could see.

I tried to comprehend the images of children from Agusan del Sur and children from the militarized areas in Bukidnon, San Fernando. I looked at their mothers. I knew they don’t leave their children’s side. They brace themselves, ready to shield their loved ones as they go through damning climate change and a climate of fear and despair.

Those who don’t want any blood spilled in the name of land choose to leave. The regular displacement of IPs from their ancestral lands is a tragedy. Land is not a commodity, nor is it an investment. It is their way of living. The value of land is not equal to the value of life. If education cannot be an inheritance they can bestow on their children, then they teach integrity and dignity. They know their land because their ancestors explored and tilled it. Their dreams were dreamt in those fields and mountains. Their memories, hidden in every stone and tree. The land knows them, as they took care of it.

This is how they have survived—by giving respect to the land. The values they keep are the only riches they bear. And this is what they want their children to inherit. Not the gold, not the soil.

Plato said: “You can discover more about a person in an hour of play than in a year of conversation.”

I find this to be true. More so now, with thousands suffering

due to the destruction of Tropical Storm “Sendong.” There is a direct correlation between unceasing deforestation and greed for gold and the onslaught of floods. Those black dots and lines—the logs, the gold—what can they amount to now in the face of a grief-stricken nation mourning for lost loved ones?