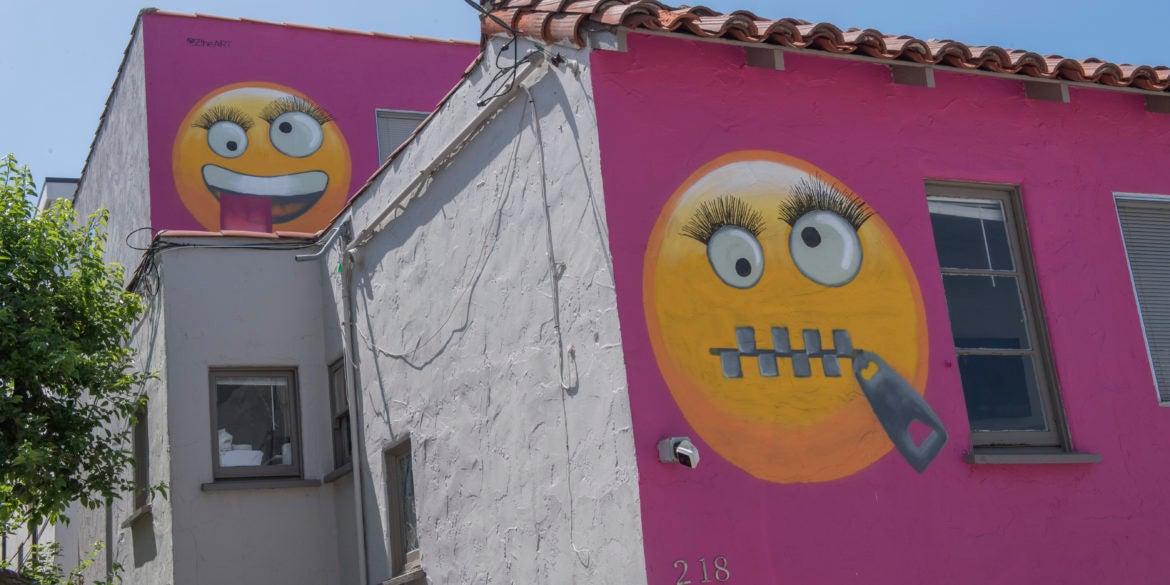 View of the pink emoji house that has become embroiled in a feud between neighbors in Manhatten Beach, California on August 9, 2019. - A house painted bright pink and adorned with two giant "emoji" faces is the latest salvo in a bitter feud between neighbors of a wealthy Los Angeles beach town. In a bid to preserve its distinctive "small-town feel," Manhattan Beach banned short-term rentals lasting fewer than 30 days a few years ago. (Photo by Mark RALSTON / AFP)

A house painted bright pink and adorned with two giant “emoji” faces is the latest salvo in a bitter feud between neighbors of a wealthy Los Angeles area beach town.

In a bid to preserve its distinctive “small-town feel,” Manhattan Beach banned short-term rentals lasting fewer than 30 days a few years ago.

Despite this, the owner of a house on 39th Street, a stone’s throw from the beach, listed her property on the Airbnb lettings website.

Kathryn Kidd was reported to local authorities by a group of neighbors and fined $4,000 in May.

A few weeks later, the contentious house was repainted a garish pink and was decorated with the two large yellow emoji faces sporting fake eyelashes.

One has his mouth zipped shut, while the other is depicted with his tongue hanging out and his eyes rolled in a delirious fashion.

Neighbors believe the emojis are designed to poke fun at them.

Susan Wieland, one of the residents who reported Kidd, told local media she had been wearing fake lashes when she spoke to Kidd.

However, Kidd insists her home’s makeover was simply intended to add a little color and character to the street.

“Instead of everybody being so gloomy, always so depressed, always in other people’s business, I just wanted to send a message to be happy, be colorful, be positive, and enjoy,” she told the EasyReaderNews website.

She denied that the emojis were intended to depict her neighbor Wieland.

Angry residents this week called on the city council to order the home be repainted in more sober tones. Authorities are studying planning rules to determine whether this is possible.

Manhattan Beach is located to the southwest of the city of Los Angeles, and is one of the most expensive zip codes in the United States.