Atlantis’ ‘Madagascar’ is polished and effortless, but . . . | Inquirer Lifestyle 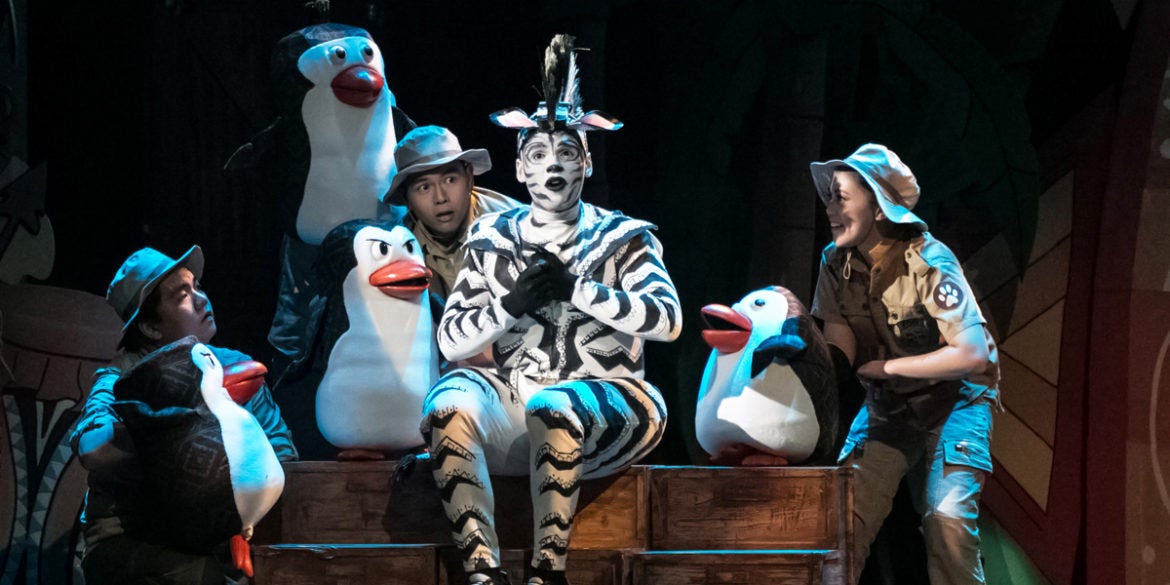 Nelsito Gomez as Marty the Zebra (center) and the ensemble of “Madagascar: A Musical Adventure” —ETCHOS MEJARES

Atlantis’ ‘Madagascar’ is polished and effortless, but . . .

From start to end, “Madagascar: A Musical Adventure” looks polished and effortless, progressing from scene to scene with professional ease. Yet, its 60-minute running time somehow feels too long.

The basis is the 2005 Dreamworks animated film about four unlikely animal friends—a lion, a zebra, a hippopotamus and a giraffe—who escape from Manhattan’s Central Park Zoo but end up shipwrecked on the titular African island nation.

How do you put that on the stage, anyway? That’s always the major challenge faced by stage-to-screen adaptations of stories about anthropomorphized animals or nonhuman beings.

There has to be a perfect blend of spectacle and showmanship: Now you’re trying to convince an audience that these animals are actually worth caring about—that these animals are just as real as they are. The world being conjured here must be big enough to metaphorically surpass the spatial limitations of theater, and its inhabitants small enough to be recognizably human.

You don’t get that from the production directed by Steven Conde. It is unable to override the weaknesses of its material—not in the way that, say, its mother company’s productions of “Carrie” and “The Addams Family” did back in 2014.

Thus, “Madagascar” has a two-dimensional quality to it. There isn’t a fictive world being created here, but a show that is very much conscious—too conscious—of its being a show. It feels like elaborate children’s party entertainment, starring grown-ups in expensive costumes.

Comedic highlight
Another fault of the material: It allows for far too few performers onstage. A comedic highlight of the movie is that entire troop of eccentric lemurs—how do you translate that to the stage?

There’s also the actor playing the literal star of the show, Alex the Lion, whose inborn qualities as a savage beast in need of animal flesh for food begin to surface after the shipwreck, causing a temporary (and rapidly resolved) rift between him and all the other characters.

In a word, Markus Mann doesn’t cut it as Alex—he has cardboard charisma and is unable to carry the show on his shoulders (though he is forced to don a massive, maned headpiece that looks like it drowned in glue).

Mann plays Alex like Rum Tum Tugger from “Cats,” that the production’s focus actually shifts to Nelsito Gomez as Marty the Zebra, the unfortunate victim of Alex’s hunger. In a late and underutilized appearance, George Schulze also commands attention and elicits guffaws as the outlandish king of the lemurs.

Chalk all this up to necessary birthing pains for a new player in an already-small industry, then. For an hourlong kiddie musical, “Madagascar” isn’t exactly a show that truly pops and entertains and stays in the memory.

Ultimately, everything boils down to choosing the right material. After all, productions don’t become full-blown productions overnight; they begin as scripts. —CONTRIBUTED