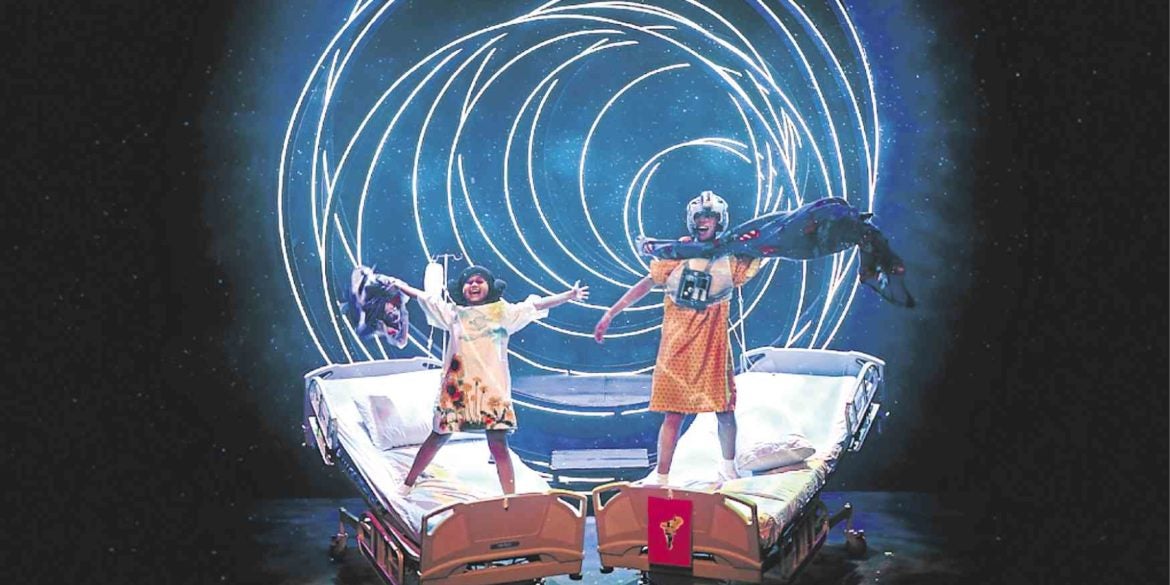 “Dani Girl” is the kind of story that will mean different things to you depending on what stage of your life you’re at when watching it.

Michael Kooman & Christopher Dimond’s musical “Dani Girl” was the maiden production of The Sandbox Collective, and for their fifth anniversary they decided to return to it with a new cast (as alternates to their returning one) and a new stage.

Directed once again by Toff De Venecia, “Dani Girl” tells the tale of Dani Lyons, a precocious 9-year-old girl distraught by the return of the cancer she thought she’d beaten. Set in a hospital, she makes a new friend in roommate Marty, a fellow cancer patient and certainly less made-up than Raph, her imaginary friend cum guardian angel. Together they go on a series of adventures to recover Dani’s lost hair and an answer to the question “why is cancer?” Through a series of flights of fancy, the duo travel to the inner workings of a beloved teddy bear and even explore the afterlife.

“Dani Girl” is the kind of story that will mean different things to you depending on what stage of your life you’re at when watching it. Some of the dramatic frisson occurs not just because of what goes on in the text but in the divide between the main character’s naivete and the audience’s understanding of the world.

It grapples with the escapism of denial, both its pros and cons, as well as guilt over an absentee father and the vagaries of faith in a seemingly cruel situation. While running the risk of being twee or cloying, the success of this endeavor mostly rests on the cast’s performance, and these two sets of performers are thankfully up to the task.

The returning cast of Rebecca Coates, Luigi Quesada, and Lorenz Martinez (as Dani, Marty, and Raph, respectively), who take up most of the play, are quite comfortable in their roles. There’s an easy familiarity they have with the material and with each other, Martinez’s manic energy feeding off of the two younger actors. Their alternates (Felicity Kyle Napuli and Daniel Drilon) have the smaller advantage of being closer to their characters’ ages, and the suspension of disbelief (and thus drama) comes easier and is more immediate.

De Venecia’s direction makes ample use of the space, hospital beds wheeling to and fro, the actors’ energy caroming off invisible walls that barely contain both a lightsaber battle and interplanar travel.

Projections help aid the sojourn in the minds of the audience, and a hole cut in the backdrop allows for planar depths that add an ethereal feel to appropriate points in the generally moving (but not without its share of laughs) story. It’s also a testament to the cast’s skill that they go between more intimate moments and broader showstopper numbers with aplomb.

This iteration of “Dani Girl” is a warm victory lap of sorts for The Sandbox Collective. Once again, a nice interweaving of material and team can elevate material to unexpected places. Older and with more experience, they can pull off shows like “Dani Girl” and make it look easy. No mean feat.

“Dani Girl” will run on the weekends of Aug. 10-Sep. 1 at the Carlos P. Romulo Auditorium of RCBC Plaza. Tickets are available at Ticketworld.