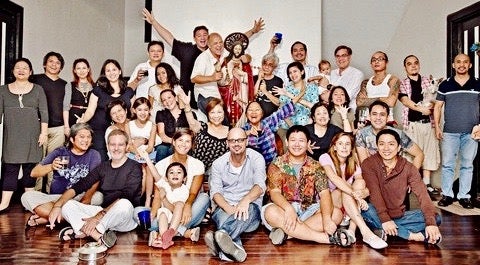 MaArte oPEN House, on its last day today, brings back the vibe of the Malate landmark

When the good times were gone and it was time to move on, the people who lived, worked and partied there took it with them.

It was all over the moment the city government got wind of Malate’s tourism potential and started making moves to gentrify the place to attract a more upscale crowd.

It was like introducing an invasive species into a fragile ecosystem. The people who actually gave life to the place—the artists and would-be artists, the street people, the creative professionals and the old bohemian crowd—fled in droves.

Surviving the blight is North Syquia, a prewar, 24-unit Art Deco apartment building. (Its sister, South Syquia Apartments, once home to half of Manila’s fashion designers, wasn’t as lucky.)

For a time, North Syquia served as base for a congenial crowd, mostly belonging to what is now called the “creative class.”

In the early years of the new millennium, North Syquia became legendary for its Christmas parties, in which residents would open up their units to selected guests, who would go apartment-hopping. Food, beer and wine flowed freely, and great fun was had by all, until way past sunrise the following morning.

You had to have been there, but a whiff of vicarious nostalgia might be had at “MaArte oPEN House,” the 11th edition of the wildly successful shopping event, running this weekend until today at Peninsula Manila. As the name suggests, this year’s theme is inspired by the North Syquia Christmas open house parties of days gone by.

“The whole feeling should be the way Syquia is—cozy, warm, friendly,” says painter Phyllis Zaballero, who had her studio at North Syquia for over two decades.

Zaballero is also the vice president of the Museum Foundation of the Philippines Inc., which runs the MaArte fair to raise funds for the National Museum and its heritage and culture projects.

“We had the open-house parties going for about five years,” she remembers.

“Before, we would all get together in one place. Our parties became bigger because friends would come, so one year we decided to open it up. We put down the rules: Each resident would have to come up with a guest list of 30 names, and submit it to the committee. Only those on the list were invited. We realized all sorts of people would come because of the open house. We had bouncers downstairs at the desk, a guestbook, and the guards were given our phone numbers.”

Not everyone opened up his or her unit, but everyone in the building was invited. There was usually a cooler of beer outside every open door. Each host offered a different menu, so guests could sample different fare as they went from one unit to another.

“We had three kinds of music, though not at the same time,” recalls Zaballero. “One apartment had a grand piano, somebody had a jazz band, another had rock.”

‘Your friend is my friend’

“It worked beautifully,” she says. “Everybody had a grand time, except the owner of the apartment, who couldn’t leave. People would come in that you didn’t know and you would ask, ‘Whose friend are you?’ The whole concept was, ‘Your friend is my friend.’ We were the first Facebook.”

One year, the power transformer for the building blew up and caught fire, and residents had to lean out the window with a fire extinguisher to put it out before the building burned down.

“It wasn’t our idea to stop, but eventually it got out of hand,” she says. “All kinds of people started coming in. Things got lost, which never used to happen. There was a line going down the street of people waiting to come in, because word got around that everything was free.”

That wasn’t the worst of it, she added: Residents would find strangers doing illicit substances—or each other—in their bathrooms.

It wasn’t really meant to last. With increasing affluence, growing families, changing lifestyles, age, most of the residents eventually outgrew apartment living. Besides, Malate was, for all intents and purposes, dead.

For Zaballero, the last straw was the worsening traffic she had to endure going from her Quezon City house to her Syquia studio. She decided to move out six years ago, but before packing her easel and paintbrushes, she commemorated those idyllic Syquia days in a series of paintings titled “Leavetaking.”

(Talk about changing times; She later learned that sexy star Ellen Adarna had taken over her old flat and turned it into a Zumba studio.)

There are still a few of the old gang holding out at North Syquia, but the wrecking ball is casting its long shadow on the building as redevelopment of the Roxas Boulevard area continues apace. Unless it’s declared an important cultural property—which residents have been pushing for for years—it could soon go the way of the old University Club Apartments, the Angela Apartments, the Admiral Hotel and other old Manila landmarks.

Considering that the old girl survived the last days of World War II, when retreating Japanese set it on fire but failed to burn it down, that would be a shame.