Tubbataha: ‘We must build apartments for some 2,000 birds—we’re halfway there’ | Inquirer Lifestyle ❮ ❯ 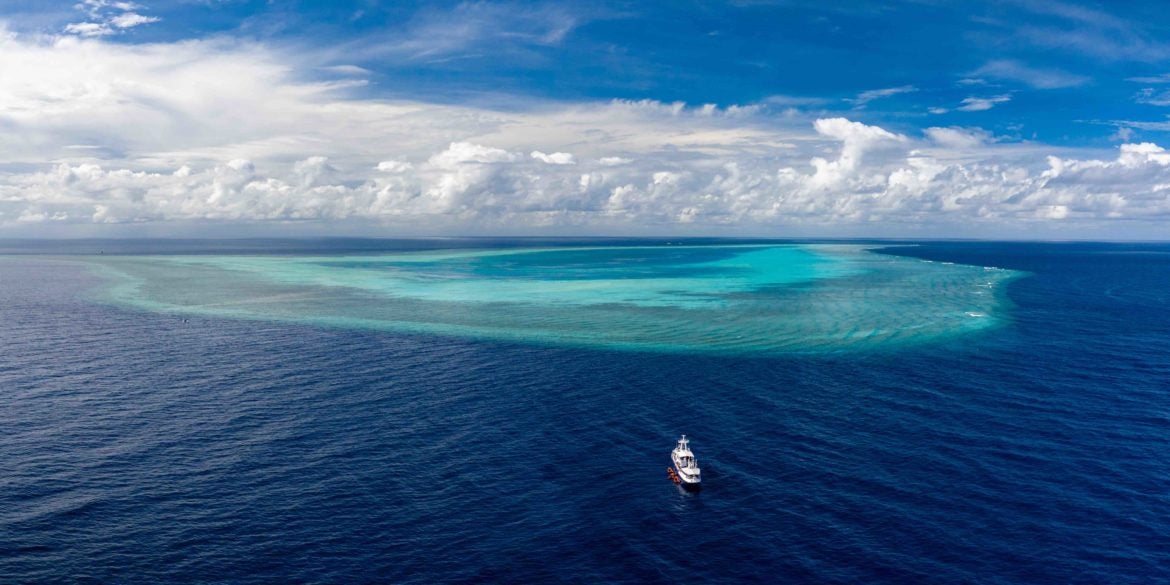 The Tubbataha Reefs, with the M/Y Discovery Palawan in the foreground, as photographed using a drone. —ANDREI VOINiGESCU

Tubbataha: ‘We must build apartments for some 2,000 birds—we’re halfway there’

What happened? ‘We’ve lost a lot of vegetation over the years’

One cloudy afternoon last June, I skipped a dive during the extended transition trip from Tubbataha to Batangas of the Discovery Fleet’s sleek, comfortable dive boat M/V Discovery Palawan, so Angelique Songco, the indefatigable Protected Area Superintendent of Tubbata Reefs Natural Park, could entrust me to her veteran Marine Park Ranger Segundo “Seconds” Conales of the Tubbataha Management Office (TMO).

Seconds took the Discovery Fleet’s operations head and photographer Yvette Lee, photographer Andrei Voinigescu, and myself for a quick spin by TMO speedboat around the little strip of land known as Bird Islet. It was a rare treat, as no visitors are allowed within a hundred meters of the place to leave the residents in peace.

We got close enough to see the seabirds’ new manmade digs—bamboo structures in different forms, with gradations like stairs or shelves, and with several little “units” already occupied. Although the small forest that once existed there was gone, despite the Rangers’ replanting efforts, it was heartening to see much life—mothers were herding their chicks along the beach. “We should build apartments for some 2,000 birds,” Songco reveals. “We’re about halfway there.”

More will come up as well on Tubbataha’s South Islet, where the construction of a new lighthouse, a Coast Guard facility required for navigation in the area, was recently completed, and will help prevent the island’s further erosion.

The birds are an essential part of the experience of being in Tubbataha in the Sulu Sea, easily the Philippines’ most important marine protected area. If you can tear your eyes away from the deep, hypnotic blue of the water and the marine life underneath, you spot the seabirds—soaring through the impossibly clear sky, skimming the glassy ocean surface, swooping down to join the feast when tuna drive smaller fish upward.

Tubbataha was proclaimed a marine park and protected area by President Corazon Aquino in 1988, inscribed as a Unesco World Heritage Site in 1993, added to the Ramsar List of Wetlands of International Importance in 1999, and declared an Asean Heritage Park in 2014.

In 2015, it was also declared one of three Flyway Network Sites in the country by the East Asian-Australasian Flyway Partnership, an international network of partners working to conserve migratory seabirds and their habitats.

That’s because amid these 97,000-plus hectares of submerged reefs, the two islets, North (also known as Bird Islet) and South, make up an important rookery for migratory birds.

In a world where animals’ homes are being destroyed at an alarming rate, Tubbataha has been called the country’s “last great rookery”—among the remaining known safe breeding habitats of six species of seabirds in Southeast Asia: the Red-footed Booby (Sula sula), the Brown Booby (Sula leucogaster), the Great Crested Tern (Thalasseus bergii), the Sooty Tern (Onychoprion fuscatus), the Brown Noddy (Anous stolidus), and the Black Noddy (Anous minutus worcesteri).

This subspecies of Black Noddy, in particular, is significant. Its scientific name reveals that it was one of the birds first spotted in these parts by noted American naturalist Dean Worcester in 1911. Also, it is found only in the Sulu Sea.

Therein lies a problem now facing the people protecting Tubbataha, specifically the TMO: Since 2015, the numbers of birds recorded in the TMO’s annual bird count have been going down.

In 2016, there was elation when scientists spotted the Masked Booby (Sula dactylatra) during a bird count May 10-14, 2016, the first sighting in 21 years. This bird was last seen in 1995, and was believed to have become extinct in these parts. One solitary specimen has since made its home there.

Other than that, the numbers are sobering. Among the four species of ground breeders, who lay their eggs on land, only the Great Crested Terns have increased in number. For the two tree breeders, who build nests above ground, the Red-footed Booby count has steadily decreased from 3,492 in 2015 to 1,080 this year. From 8,716 individuals in 2016, only 2,072 Black Noddies were counted this year.

“We’ve lost a lot of vegetation over the years,” reports Songco.

The reason is not that simple, however. What beach forest existed on this approximately 2-ha strip of land has been overfertilized—literally, degraded by the constant excretion of a lot of Red-footed Boobies.

“They have had to leave previous roosts in the Sulu Sea, such as Cagayancillo,” Songco says. “If there’s a disturbance where they live, they will search for new places. We got an over-abundance of the species, so in 10 years, the forest was gone.”

Here’s where it gets more delicate. Songco has had to prioritize her focus; as one consultant told her, “We have to take care of the platinum first, then the gold and silver after.”

Platinum in this case are the more endangered Black Noddies, who have no other habitat in the area but Tubbataha. “The Booby will survive elsewhere, but the Noddy won’t.”

A solution, as approved by the TMO’s avifauna management advisor, Manila-based Danish ornithologist and conservation scientist Arne Jensen, has been quite interesting: to build “bird apartments” to shelter the smaller Black Noddies, so they are not displaced, and can nest and lay their eggs in peace without worrying about the bigger birds’ sh-t literally falling on their heads.

The lighthouse will certainly benefit the dive boats that come here every Tubbataha season; after all, tourism is the park’s main source of revenue. Underwater, the reefs again did not disappoint. In face, in what is now one of my most memorable scuba-diving experiences, an 8-meter whale shark we spotted at about 30 feet followed our group to the surface for almost half an hour of interaction, swimming lazily around. It was a testament to how the animals felt safe in Songco’s turf; nobody here was going to turn this gentle beauty into soup.

Songco says TMO is still experimenting with the optimum design for the bird apartments. The decline in population tells a bigger story than she can directly control, however.

“Unless they have a stable habitat, birds will not return. Bird habitats have to be protected in places beyond Tubbataha. This is indicative of conditions outside the park; what happens affects us, and it’s the threats from outside that are difficult to manage.”

As the birds skimmed the water at the end of another perfect day, we could only hope that Tubbataha’s topside treasures can continue to thrive as well as their counterparts beneath the waves.