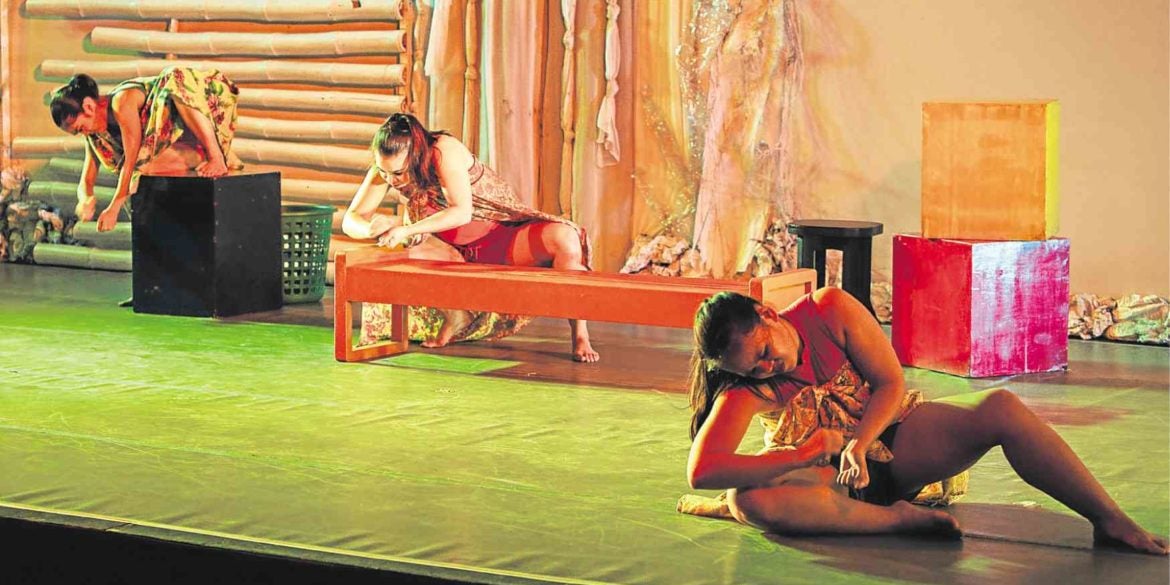 Agnes Locsin’s students do her proud

At 72 years old, Locsin Dance Workshop in Davao is the oldest ballet school in the country

Imperial Manila” does not have a monopoly of great dancing. This is proven by Davao-based choreographer Agnes Locsin who runs the 72-year-old Locsin Dance Workshop (LDW), the oldest ballet school in the country.

For the past decade, Locsin’s compositions have been interpretations of the beauty of the environment and how man has ravaged it. Her recent production, “Elementos,” was an homage to earth, wind, fire and water, and how they’re integrated into Davaoeños lifestyle.

Locsin wore the hats of producer/director and let her protegés prove their choreographic mettle.

A collaboration between LDW and the Carmen D. Locsin Foundation, “Elementos” was a tapestry of expressive choreography of “Lupa (Earth),” “Hangin (Wind),” “Apoy (Fire )” and “Tubig (Water)” by Alden Lugnasin interspersed with down-to-earth, at times humorous, vignettes of everyday life in Davao, depicted by her wards. It was arguably her most powerful piece to date. Commentaries on Davao, set to popular music, resonated with the audience.

Lugnasin lucidly evoked the elements by showing elastic, earthbound movements for earth; rapturous movements emphasized by a billowy scarf for wind; flickering fingers and rippling body for fire; and a pas de trois of abstractions of waves and dripping water for water.

Biag Gaongen as “Lupa” manuevered his torso and limbs into a seamless balance of sharp and soft movements. Kris-Belle Paclibar enriched her portrayal of “Hangin” with contrasting qualities of the ethereal and the resistance of gravity. Sonny Locsin projected the searing imagery of fire with intensity.

“Tubig” harnessed the strengths of Gaongen, Paclibar and Sonny Locsin. They displayed virtuoso partnering with Paclibar precariously being transferred from one partner to another.

The most applauded portions were the scenes danced and acted with conviction by Locsin’s young students. “Elementos” also parodied the Davaoeños’ penchant for fitness fads, talent contests, wrestling in the form of mud-slinging, and going gaga over Kadayawan, with locals outdoing one another in selfies and groufies.

A vignette, set to “Singing in the Rain,” portrayed how locals stayed in the shade or used a cover but never an umbrella when it poured. Another scenario made fun of on how people reacted to an earthquake with Carole King’s “I Feel the Earth Move” as background. Dancers’ dialogue made fun of the upper-class Davaoeño Tagalog accent.

Then there were dance commentaries on how the Davao River, once the ideal place for laundry and swimming, had become polluted and how a man violated the city’s no-smoking law.

The most personal vignette, “Buhatin Mo Ako,” choreographed by Gaongen, paid tribute to Locsin’s mentorship and showed her wards’ gratitude. Dancing to “Wind Beneath My Wings,” senior students Monica Uy and Samantha Martin rose to the challenge and displayed how trust is crucial in effective partnering.

Although Locsin took the backseat as choreographer, “Elementos” was a testament to her talent as dance school director and mentor. She gave Inah Ansaldo, who has disabilities in hearing and speaking, her moment to shine by letting her describe the prologue through sign language. Despite her handicap, she was instinctively “musical” and synchronized with the group.

As the country’s oldest dance school, LDW has established a long line of dancers and choreographers who can express the spirit of Agnes Locsin—her grounded dance style, the need for dancers’ emotional connection with the choreography, and powerful storytelling. —CONTRIBUTED