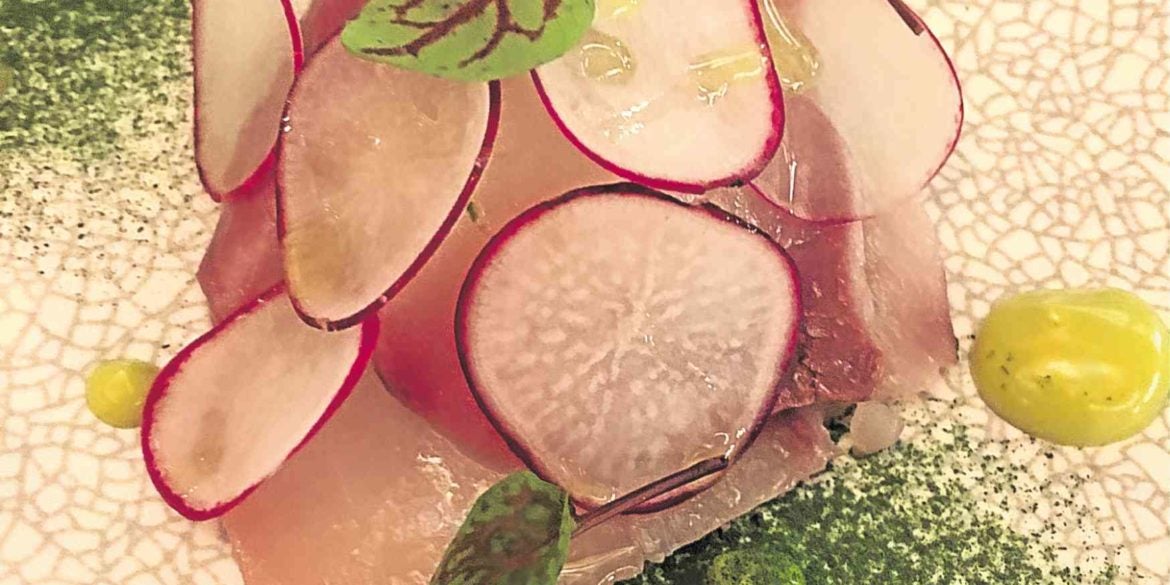 Yellowtail and Crab with radish and parsley powder

It is rare to experience sophisticated European flavors using Japanese discipline. But two good friends have combined just that.

Ito spent 18 years working with the Hiramatsu Group in its various Michelin-star restaurants in France and served as executive chef for 10 years at the one-Michelin-star Hiramatsu in Paris.

He rose to fame after earning a Michelin star in a record of five months for L’Archeste, which opened in September 2016.

Meno honed his craft working in various Michelin-star restaurants. He was the executive chef of Brasserie Paul Bocuse and one-star Maison Paul Bocuse, both in Tokyo.

The two chefs first met in 2003 when Hiramatsu Paris sent Ito to Japan to be a guest chef at an event in Hiramatsu-Fukuoka, where Meno was the sous chef. With similar backgrounds and experiences, the two became good friends and have cooked together a few more times since.

The degustation dinner, dubbed “Four Hands Collaboration,” was a reunion of sorts. For the first time in 13 years, they again shared the kitchen and showcased Japanese discipline and precision in their cooking.

“We always work with Japanese chefs who practice kodawari, the Japanese pursuit of perfection and dedication to craft and mastery,” said Uy. “At Epilogue, we present the best of travel cuisine, bringing to life some of the most satisfying and enjoyable parts of our chef’s culinary journey.”

For the degustation, Uy said the chefs worked together on each dish, instead of separately preparing a number of dishes each.

They also incorporated local ingredients (banana heart, chayote, moringa) and flavors (dalandan, calamansi, mango) in most of the dishes.

Ito came in a few days early to explore local produce and dishes, ate his first meal in a Filipino restaurant (enjoyed the sisig and thus found a way to incorporate it into the degustation), and went to the market (Farmers in Cubao).

The first courses were light and easy and served together on a bed of red mung beans: St. Jacques, a Hokkaido scallop cooked in ginger oil and singkamas rémoulade; beignet, a crunchy pumpkin flower with dalandan jam and Parmigiano-Reggiano aged for 24 months; and pissaradiere, a sourdough pizza crust topped with Mornay sauce, summer truffle and homemade Iberico pancetta.

Second course was a gazpacho, cold soup served foam style with red bell pepper mousse, burrata and basil. It was best eaten by taking a little bit of everything in one sip.

Next was the yellowtail and crab, seared Alaskan king crab prepared with liveche mayonnaise made of wild white celery (brought in by Ito from France) and eggplant cooked in agedashi sauce, radish and parsley powder.

It was followed by a pan-seared and steamed giant grouper with bouillabaisse soup of fish bone and crab meat. It was served with lemongrass, banana heart, chayote and fennel in aioli sauce. Best eaten with a slice of homemade baguette.

Next course was a cup of poached foie gras and portobello mushroom with adlai risotto in moringa flavor.

Then came the tender and juicy wagyu tenderloin. The grilled Australian wagyu with a marbling 7 was served with béarnaise sauce, summer truffle and sisig-inspired pork mask marinated in Pedro Ximénez sherry vinegar.

“Owing to the success of the event,” said Uy, “we hope to have more special dinners, either a collaboration with other foreign chefs or special theme dinners by chef Meno.”