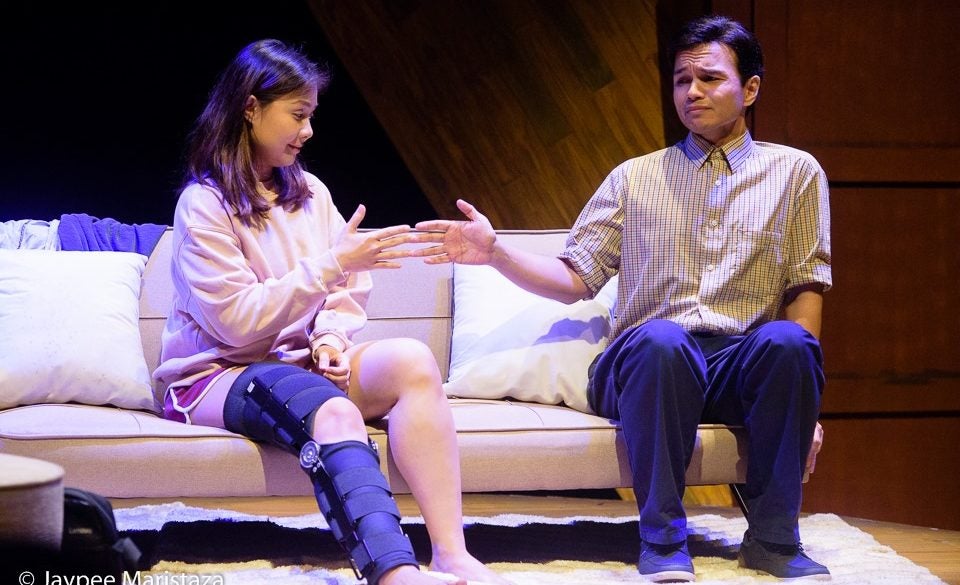 This year has seen a slew of productions with imaginatively offbeat use of theatrical idioms to enable audience empathy with painful faces of the human condition.

Now, Twin Bill Theater, on its return after a two-year hiatus, uses the structure and style of the romantic comedy—an oft-used, perhaps even overused, trope of film and theater—to broaden an understanding of the autism spectrum.

The very first encounter between disabled dancer Senga and her condo neighbor Ever, a geosciences professor with Asperger’s syndrome, is the genre’s classic comic ploy of setting two characters at loggerheads, inevitably leading, one assumes, to an up-and-down progress of their relationship, to a satisfactorily happy (or, alternatively, bittersweet) finale.

So, in fact, the play goes. But it rises above its rom-com conventions by engaging the viewer, through wit and unsentimental candor, in the two protagonists’ complex situations. The play’s script skillfully balances laugh-out-loud repartee with sharp insight into its characters. The comedy entertains without trivializing their pain.

And it is quite wonderful how the play shifts the weight of the roles’ respective handicaps.

It starts out with Senga’s physical disability apparently being the lesser burden, and her nurturing role, near-maternally as well as sexually, in liberating Ever’s inhibitions.

Yet, in the end, it is Ever who inadvertently provides the key to unlocking and setting a path to treating Senga’s own repression, an emotional autism perhaps more serious than his own.

That is the play’s deft way of making the point that, autistic or neurotypical alike, every person copes with his or her own abilities and disabilities with the same capacity for creating a wholeness.

In this two-hander, the actors play off each other wonderfully.

Randy Villarama is the more immediately impressive. His mastery of the tics and fumbling hesitancies of his condition is mind-boggling. Combined with his comic timing and contrasting professorial air in his classes, he projects a persuasively rounded portrait of a bundle of talent and affliction that evokes simultaneous sympathy and admiration.

But Jill Peña may be even more outstanding in her nuanced portrayal of an ostensibly “normal,” self-sufficient achiever, gradually revealing how her balked artistic aspirations and repressed family background combine to gnaw at her normalcy.

Villarama and Peña’s playful, then increasingly intimate, interactions are beautifully modulated. The hesitant, excruciatingly incremental tactile contact scene is an especially marvelous blend of the comic and the moving, while the final full embrace is a quiet but triumphant celebration of human connection.

Supporting them is the excellent production design: Kayla Teodoro’s set, simple but elegant and warmly evocative, Joseph Matheu’s suggestive lighting, the video projections of Joyce Garcia effectively providing a wider context to the lives of the protagonists. Francis Matheu’s orchestration of all the comic and dramatic elements is masterfully sensitive.

There are inevitable cavils. The extended projections of Ever’s lectures, while obviously serving to situate his intellectual achievements rising above his condition, seem repetitive after a while. And this reviewer is uncertain if the harping on climate concerns is intended as a subtext to the story or simply a function of the academic background. The dance sequences at start and end, though attractively choreographed by JM Cabling, feel rather unnecessary.

There are also sound quality issues. It may have been this reviewer’s spot, perhaps too close to the stage, that led to missing too much of the snappy dialogue and little interactions—a bit distressing, as these are so contributory to the enjoyment of the play. The voice recordings of Senga’s aunt, too, are not always fully distinct.

Notwithstanding such reservations, the production is testament to theater’s ability to take a sensitive, difficult human condition, and simultaneously educate, entertain, and inspire. The cliché “heartwarming” can sometimes come across as patronizing, but there is no question one comes away from this play feeling good about the human potential. —CONTRIBUTED