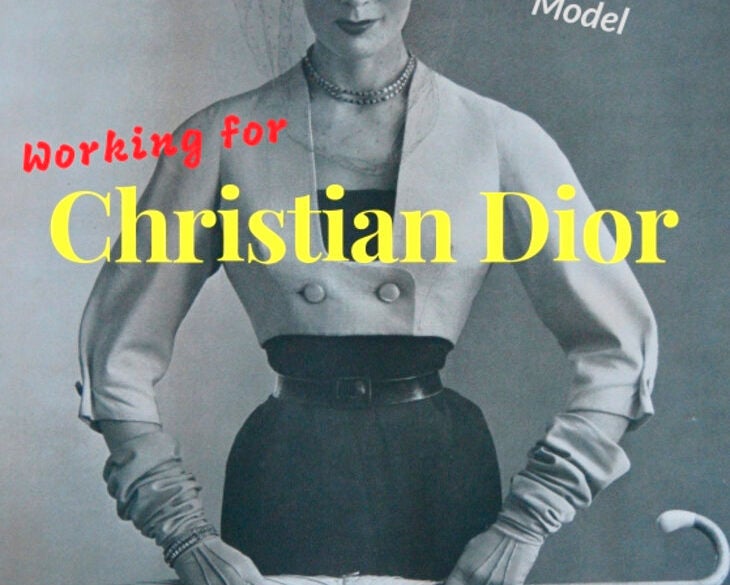 This image made available by Zuleika Books shows the book cover image of 'Working For Christian Dior' by Jean Dawnay. Before there were supermodels, there were 'mannequins' _ living, breathing women who played an active role in designing haute couture by standing very, very still. Designers and artisans would pin, prod or tuck fabric and toiles to the mannequins to bring sketches and ideas to life. In 1950, one such mannequin, the British model Jean Dawnay, went to work full-time in Paris at the fashion house of Christian Dior. (Zuleika Books via AP)

Model became Dior muse by knocking on his door

LONDON  — Before there were supermodels, there were “mannequins” — living, breathing women who played an active role in designing haute couture by standing very, very still. Designers and artisans would pin, prod or tuck fabric and toiles to the mannequins to bring sketches and ideas to life.

In 1950, one such mannequin, the British model Jean Dawnay, went to work full-time in Paris at the fashion house of Christian Dior. This contract alone was enough to earn her newspaper coverage in Britain at the time, but she also wrote a book about her experiences. “Model Girl,” published in 1956, went behind the scenes of fashion shows, couture houses and photoshoots, lifting the veil on the hard work that goes into glamour.

Now Dawnay’s daughter, Katya Galitzine, is re-releasing a section of the memoir as “Working for Christian Dior” (Zuleika Books) to coincide with the “Christian Dior: Designer of Dreams” exhibition at the V&A Museum in London.

Galitzine says her mother arrived in France on the way back from a modeling job in Venice and spent a few days knocking on designers’ doors, asking for work.

“She only went to the Houses whose perfumes she knew, because that was how she knew the names, and every single one of them wanted her, so she must have had something,” Galitzine says. “I mean, she did have something. But she was very beautiful, she was very elegant. She adapted very well to whatever people wanted, and she had an 18-inch waist.”

Although she spoke no French, Dawnay’s cold calling paid off, and she accepted a contract at Dior’s atelier.

“They had to clock in, like in a factory, at 9 o’clock, and then she would stand, literally stand and be pushed around and shoved around and pricked and pinned,” her daughter explains.

Galitzine found one Dior dress hidden at the back of a wardrobe after her mother died in 2016.

“There was this beautiful, wool worsted tight-waisted dress that’s called ‘Nonette’ that was original Christian Dior, numbered. If you did a test on it, it would probably have his DNA dust on it because he actually made it on my mother in 1950,” she says. “And it was the dress that she wore at the original Savoy show that brought Christian Dior to London in spring 1950.” The dress is part of the V&A show.

After Dawnay left Dior, her celebrity status continued to rise.

In 1951, Vogue took the unusual step of sending her and several other models to an event in Australia, Galitzine says. “Clothes had been sent to locations, but once the clothes got there, they’d find pretty local girls, local models, to be the model. To actually pay on an aircraft for five girls and put them up in a hotel — that was enormous. So those five girls became ‘supermodels.'”

Dawnay wrote her memoir in Majorca, where she socialized with Prince Rainier and Grace Kelly, who were there on their honeymoon.

“She’d spend all day writing her book and then not have to worry about food because she’d go to this fantastic yacht and have dinner,” Galitzine says. In photos of her mother and Kelly from that period, she says, “they looked so similar actually. They’re very much that ’50s style with the scarves and their pointed glasses.”

The comparisons didn’t end there: Dawnay also went on to marry a prince — a Russian emigre to Britain. She became Princess George Galitzine.

In later years, she wrote another book about modeling, made regular appearances on quiz shows, advised stores on fashion, and did charity work.

In an interview with The Associated Press at a Dior 50th anniversary exhibition in 1997, Dawnay recalled the excitement of those days: “After the war, with the austerity and clothes rationing, coupons, when Dior came on the scene, it was such a sensation — these incredibly feminine, romantic, beautiful clothes with so much material.”