The heart and soul of Gina Lopez | Inquirer Lifestyle 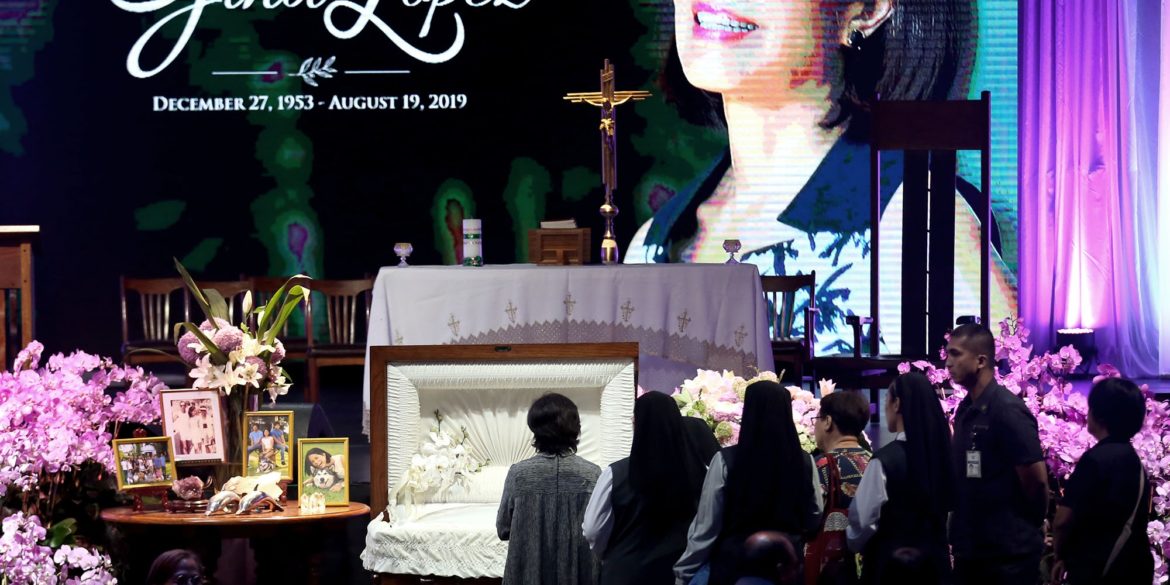 The heart and soul of Gina Lopez

Homily by Fr. Tito Caluag at the wake Mass, August 20

(In lieu of Fr. Caluag’s regular Sunday Gospel reflection, we are reprinting his homily at the Mass for the wake of ABS-CBN Foundation chair Gina Lopez, who passed away last August 19.—Ed)

But at daybreak on the first day of the week they took the spices they had prepared and went to the tomb. They found the stone rolled away from the tomb; but when they entered, they did not find the body of the Lord Jesus. While they were puzzling over this, behold, two men in dazzling garments appeared to them. They were terrified and bowed their faces to the ground. They said to them, “Why do you seek the living one among the dead? He is not here, but he has been raised. Remember what he said to you while he was still in Galilee, that the Son of Man must be handed over to sinners and be crucified, and rise on the third day.” And they remembered his words.

Fr. Ronald Holheiser, in his classic work, “The Holy Longing,” writes that our life is a continued presence in the world of God’s compassion and love, which he describes as situations in life where our souls are most alive.

If a mother is most animated in preparing meals for the family, that is her way of witnessing to God’s love and compassion. Some have a passion for service and social justice; thus they live life for advocacies that further these causes.

Gina’s soul and life were most alive in her advocacies. Many of us will remember her remarkable work in Bantay Bata, Bantay Kalikasan, the Pasig River rehabilitation, the La Mesa Dam Ecopark, ecotourism and her brief stint as Secretary of the Department of Environment and Natural Resources.

Underneath, these advocacies, the solid work and the laudable achievements, though, is the journey of her life, of her heart and soul.

Close to 50 years ago, she began her journey, “left everything behind,” joined Ánanda Márga Pracáraka Saḿgha, and for 20 years lived as a missionary in India and Africa.

Her journey brought her across the globe, across nations and peoples, across social classes and cultures. This journey prepared her to come home and start one of the most remarkable organizations that pioneered in works in education, child protection, livelihood, ecotourism and environmental protection.

These works that Gina started and championed were characterized by the following distinct qualities and core values.

Gina’s works are visionary. As Robert Kennedy often said, borrowing from renowned playwright George Bernard Shaw: “Some men see things as they are and say why. I dream of things that never were and ask, why not.”

What others saw as impossible, for Gina, was not just possible, but something that needed to be worked on now! There was nothing impossible for Gina.

Wherever she saw a need or an opportunity to make lives better, to make the world better, Gina would always say, “Why not?”

In all that she did, Gina created a network of compassion, enlisting the support of different stakeholders—first working with a broad coalition, then “screening” them along the way, separating the wheat from the chaff.

I witnessed her effective “screening” process. In the early 2000s, she gathered people for one major advocacy, a private-public sector partnership to set up what would have been Bantay Korapsyon.

To say she does not take “no” for an answer was only one part of the equation. The other part was the “screening.” She would strongly take on anyone, a government official, a military or police officer, an executive, a politician—which often became a scolding—who would refuse to look at new possibilities.

She was like a teacher who would send out a misbehaving or unprepared student from the classroom. Each time this happened in a meeting, I would cringe, half in embarrassment and half to hide my amusement.

This was not so much to shame people, but it showed more her determination to empower people, let them see the power of dreams that fueled possibilities.

It was an empowerment to believe in not just what one can do, but in what we can do better, greater together. Her famous lines: “Kaya pala! Kaya natin ’to!” This was her brand of empowerment.

This empowerment was what Pope Francis referred to in a talk he gave almost two years ago. His exhortation was, with the power of technology available to us, we can meet the challenge to move from “I” to “we,” from “me” to “us.” In this lies the hope for a better world.

“Kaya natin ’to!” Gina had time and again created the “we,” the “us,” the network of compassion for one another, for the cause and the task at hand to build a better world, paradise here on earth, paradise in our country, in whose beauty and people she took pride in and drew inspiration from.

On my way to say Mass for Gina at Heritage yesterday, a homily I said for the anniversary of Kapitan Geny four years ago came back to me. I realized how Gina was so similar to her father.

I shared how Kapitan Geny’s leadership reflected the leadership style of St. Ignatius of Loyola, which one of his closest collaborators, Fr. Polanco, described as great courage and energy in undertaking extraordinarily difficult tasks, great constancy in pursuing them, and great prudence in seeing them to completion.

Such was the life and work of Gina, her heart and soul. She took on with great courage and energy extraordinarily difficult tasks which others did not even see as possible, or had given up on as impossible.

She pursued whatever she took on with tenacious constancy, and got others to join her and do the same.

Great prudence in seeing them to completion—this we saw not just in the works she started and which continue to make the world better. Above all, this we saw in the synthesis of her life.

In her closing lines in one of her final interviews with Tina Monzon-Palma, Gina had this to say:

“God exists. He does, whether you believe or not … And if you can go into the quiet of your heart, you will feel that love is with you every microsecond of the day. It is there for you unconditionally. And may it continue to hold us, and may it continue to nurture us and propel us into creating a piece of heaven in this country.”

Her life was brought to completion. Gina’s final witness to us is that in all this, in all of her journeys, there is a God, and he is a God of love. —CONTRIBUTED