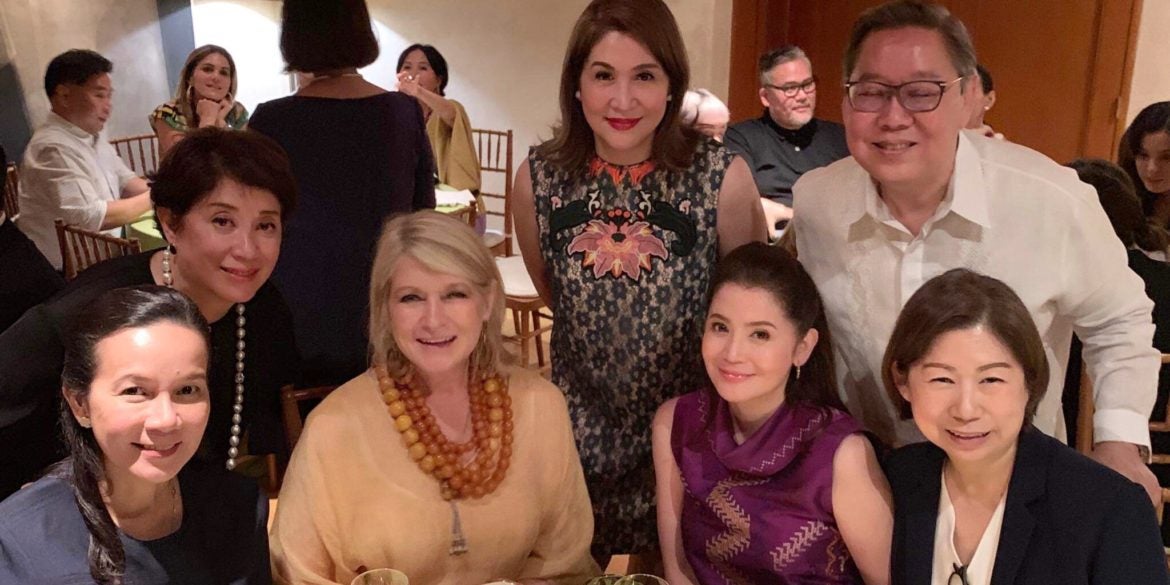 Speaking about the rising trend of cannabidiol (CBD)-infused food in the US, Stewart said she might one day come out with the “best brownie mix you’ll ever have.” Thus, the laughter.

Stewart, the name synonymous to all things home and entertaining, admitted she loves ironing and making things pretty. She said she ran into Hollywood director Steven Spielberg one day and he told her how she had turned “homekeeping” into an art form.

“Homekeeping is not housekeeping. It is not a chore,” she said. “I like to be organized. I don’t like messiness. It’s not about tidying, it’s about being organized.”

Anyone who’s ever seen Stewart on TV knows how spotless her workstation is. Not a single spill or scrap on the table, even when she’s hastily prepping or mixing her ingredients. Everything is where they should be.

What are her thoughts when people call her a neat freak?

“I love it! Neat freak is a compliment. But I’m more of a perfectionist,” she said.

She’s a tough boss, she said, but has mellowed through the years when she realized the need for a balance in the workplace. “Nobody has a balance anymore. It’s a crazy upside-down world, and you have to make the best possible life for yourself.”

The editor for her daily The Martha Blog, Jocelyn Santos, is a Filipina. “She works on the blog with me. She’s Filipino! And she hasn’t been home in 20 years.”

Before flying to the Philippines, Stewart was staying at her summer home, Skylands on Mt. Desert Islands in Maine. She owns three other properties on the East Coast. One of them is a 150-acre farm in Bedford, New York, with Ralph Lauren, Michael Douglas, Bruce Willis, “and ordinary people like me,” as neighbors.

Her formula to success is something every business student may already know by heart, she said. It starts with an idea that should stick and appeal to a very broad audience. Fill a void for something that doesn’t exist yet. Stewart says to think “need,” “want” and “void” when making a business plan.

“That’s why I’m successful because it was a big enough idea to make a good business out of, much tinier than Steve Jobs and Apple, though as far-reaching. Your idea has to be good to start with,” she said.

Stewart, who turned her hobbies into a multibillion-dollar industry, also talked about the cost of success. In 1990, Stewart and her husband, publishing executive Andy Stewart, ended their 26-year marriage.

“My marriage suffered, but I also had a creepy husband, I guess,” she said, laughing. “I am one of the few divorced, unmarried women in my group. Most of my friends have long marriages. And I’m jealous. For sure, it’s easier to have a man around to take out the trash and to buy the wine.”

Young entrepreneurs, however, must be resilient, she said. “Perseverance is very important and believing in what you are creating and what you are making.”

And don’t forget to look the part of success.

“As an entrepreneur, you can’t get too sloppy. You always have to have that appearance, no matter what you have. Always make sure you look good. So, I eat well and I exercise well. I dress well. I try. Don’t wear your dirty apron to the grocery,” she said.

She has no regrets, not even about that time she was convicted in 2004 of insider trading and spent five months in jail. “Not everybody survives a debacle like I had to go through. I was in the wrong place at the wrong time… It was a very, very tough time. But you can’t dwell on those regrets at all. You get in a trap.”

Will her brand endure the test of time?