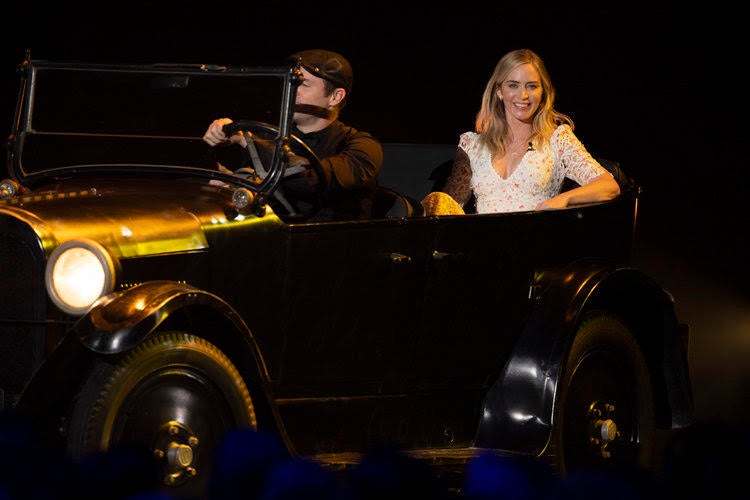 Black Panther fans, it’s happening. There will be a sequel, announced Marvel Studios president Kevin Feige and Black Panther director and co-writer Ryan Coogler at the D23 Expo 2019 in Anaheim, California. Black Panther II (that’s just the working title) will hit cinemas on May 6, 2022. “We just really really want it to be right,” said Ryan.

Close to 7,000 lucky people got a peek at upcoming titles The Walt Disney Studios will be bringing to the big screen as filmmakers from Lucasfilm, Marvel Studios, Disney Live Action, Pixar and Walt Disney Animation Studios revealed new details about their projects at Hall D23 of the Expo.

“You’re not just fans, you’re family. It’s because of you that we keep working so hard to make great films,” Alan Horn, Walt Disney Studios co-chairman and chief creative officer, told the Disney fans who had gathered at Hall D23, many of whom lined up overnight to attend the panel.

And movie fans have plenty to be excited about.

“Star Wars: The Rise of Skywalker”

Carrie Fisher, who died in 2016, will still be part of the film as Princess Leia, said J.J. They will be using footage from Episode VII. “We can’t wait for you to see her in her final performance as Leia.”

They unveiled a new poster for “Star Wars: The Rise of Skywalker” and played a sneak peek from the film. This conclusion to the Skywalker saga will hit U.S. theaters on December 20, 2019.

Marvel Studios president Kevin Feige was wearing a Black Widow cap at the panel, a nod to the film which will come out in May 2020. “We are busy making this movie Black Widow for all of you,” said Scarlett Johansson in a video from London.

Attendees got an exclusive look at the film which includes an intense fight scene between Natasha Romanoff (played by Scarlett) and Yelena Belova (Florence Pugh).

The concept art for “The Eternals” was revealed at D23.

Dwayne Johnson, who plays riverboat captain Frank Wolff in “Jungle Cruise,” sailed onstage literally. He arrived riding a boat. The live action adventure film is inspired by the classic theme park attraction. “We wanted to make a movie that was big, that was epic, that had romance and comedy and most of all, it’s got me,” he said.

He and costar Emily Blunt, who plays Lily Houghton, tried to outdo each other at the panel. She was driven onstage in a vintage car and the two showed two versions of the film’s trailer, each one putting the spotlight on their character.

Walt Disney Studios Motion Picture Production president Sean Bailey said, “Like “Pirates of the Caribbean,” “Jungle Cruise” will sail into a world all of its own on the big screen.”

Angelina Jolie will return as beloved villain Maleficent in “Maleficent: Mistress of Evil,” which will be out in two months. Angelina said, “I missed her and I loved playing her.”

Costars Elle Fanning, Michelle Pfeiffer, and Chiwetel Ejiofor joined her onstage. Michelle said, “Working with women, there’s a sense of feeling safe with each other. I loved the script and the first film.”

The live-action adaptation of “Mulan” is another highly anticipated movie. The footage screened at the panel had audience members in tears. Disney fans will be in for a treat when it opens on March 2020.

Another Disney villain will hit the big screen. Emma Stone and Emma Thompson star in “Cruella” which is currently filming in London and will come out May 2021. The younger Emma looks amazing (and punk rock) as Cruella.

2020 will also be an exciting year for Pixar, said chief creative officer Pete Docter. “We have two original films coming out. Sequel or original, the most important thing for us at Pixar is that our films connect to you.”

In Pixar’s Soul, the main character is Joe Gardner (Jamie Foxx), a jazz-loving music teacher who has dreams of playing at a New York jazz bar. An accident leads him to meet 22 (Tina Fey), a cynical soul, at The You Seminar. The two go on an adventure that explores life, purpose, and existence. “I’m so excited to be here. It was the only way I could get passes,” joked Tina.

Other cast members include Ahmir Thompson (yes, Questlove from The Roots), Phylicia Rashad and Daveed Diggs.

Music plays a very important role in “Soul.” Jon Batiste writes original jazz for the movie while Trent Reznor and Atticus Ross are working on the original score.

“Tom is like a little brother to me and you see that in this movie,” said Chris.

Tom said, “So good to be back at D23. This is the best day of the year. Last time we were here, we were space buddies and now we’re elf buddies.”

Playing Laurel, the elf boys’ mom, is Julia Louis-Dreyfus. “It’s an amazing thing to be in a recording booth. It’s very intimate. It’s a total gas. It’s fun to play the elf mom of these two bozos here.”

Octavia Spencer also lends her voice to the film.

Before leaving the stage, Tom, who is loved by Marvel fans as Spider-Man, said, “Hey everyone, it’s been a crazy week but I want you to know that I love you 3000.”

“Raya and the Last Dragon” and “Frozen 2”

Walt Disney Animation Studios’ “Raya and the Last Dragon,” coming out Thanksgiving 2020, is inspired by the cultures of Southeast Asia and written by “Crazy Rich Asians” screenwriter Adele Lim. It takes place in the imagined land of Kumandra. Playing Raya is Cassie Steele while Awkwafina plays Sisu the Dragon.

The original cast of Frozen return for Frozen 2, which will hit Philippine theaters in November 2019. “Frozen 2” is inspired by questions the first film left us with: where did Elsa get her powers? What happened to their parents? Why was Anna born the way she was? Is there really a happily ever after?

Our look at clips from “Frozen 2” tells us that we can expect the sequel to deliver many of the things we love about Frozen: sweet sibling love, great music and hilarious, scene-stealing Olaf.