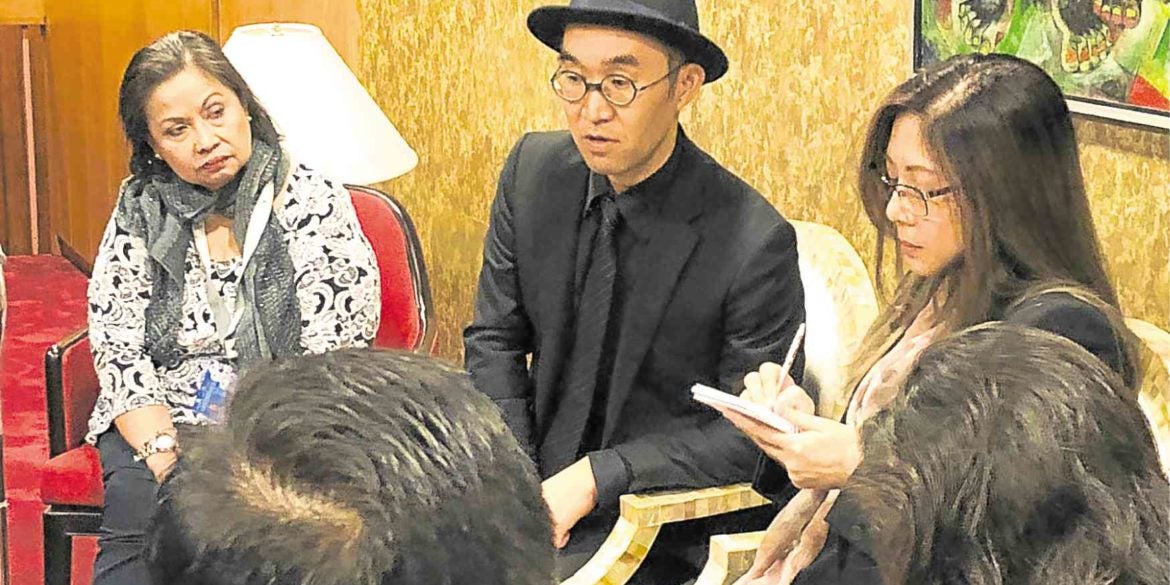 Japanese director Katsumi Nojiri being interviewed by the local press during the 15th Cinemalaya at the Cultural Center of the Philippines. JOSE MOJICA

‘Lying to Mom’–painful but honest Japanese film about family, grief and suicide

No matter how much suffering you went through, you never wanted to let go of those memories,” Haruki Murakami writes in his novel “Kafka on the Shore.” Some people hold on to memories to the point of immortalizing them through art. Japanese director Katsumi Nojiri is one of those artists who uses his personal past to create a poignant narrative about a family dealing with unexpected loss in his debut film, “Lying to Mom.”

Winner of the Japanese Cinema Splash Best Film Award at the 31st Tokyo International Film Festival and the 2019 Uncaged Award for Best Feature Film at the New York Asian Film Festival, “Lying to Mom” was easily a standout during the 22nd Japanese Film Festival, or Eiga Sai, of the Japan Foundation Manila, and the 15th Cinemalaya at the Cultural Center of the Philippines.

“Lying to Mom” is a story of a family dealing with grief. When mother Yuko (Hideo Hara) discovers that her reclusive son Koichi (Ryo Kase) has hanged himself in his room, she tries to cut the rope to save him but injures herself in the process of putting him down, causing her to lose consciousness. After weeks of coma in the hospital, she awakens without  memory of the incident. Conscious of the fragility of Yuko, her husband Yukio (Ittoku Kishibe) and daughter Fumi (Mai Kiryu) lie to her about her son’s whereabouts. With their lies eventually losing coherence, the problem worsens, opening further the can of worms.

Nojiri wrote and directed his first full-feature film inspired by the death of his own brother due to suicide. The story may be fictional, but it is his honest depiction of grief that makes the film powerful. “Each director has various ways of expressing or treating a certain topic,” he said. “As my first movie, I really want to express my personal experience, what I personally went through, what my family personally went through.” He believes that a story about family would connect to everybody. But there’s a greater wish to be able to connect to families dealing with grief.

Although the narrative is sourced from a painful past, Nojiri’s treatment of the subject matter is paradoxically comedic. He mentions that during that dark moment of his life, there were series of funny incidents he observed, which he recalls later in his adult life. This sparks the possibility of humorous treatment for a subject that is heavy. He believes that presenting the issue in a light-hearted manner would make it easier for people to understand.

Aside from the experience of grief because of a suicide, “Lying to Mom” aims to discuss other issues affecting Japan. As a highly competitive society, the Japanese people are less likely to forgive failure, noted Noriji. He articulated this problem by presenting Koichi as the victim of excessive societal expectation. Having failed in life, Koichi becomes reclusive (hikikomori—acute social withdrawal—is considered a culture-bound syndrome), eventually deciding to end his life.

Seeing cinema not only as a form of entertainment but as a platform for social discourse, Nojiri declared, “As a director I’m here to present what is, to draw a picture of what is going on.” But he admitted he was also aware of the limitations of cinema, saying that he could only wish for people to find a way to save themselves. —CONTRIBUTED