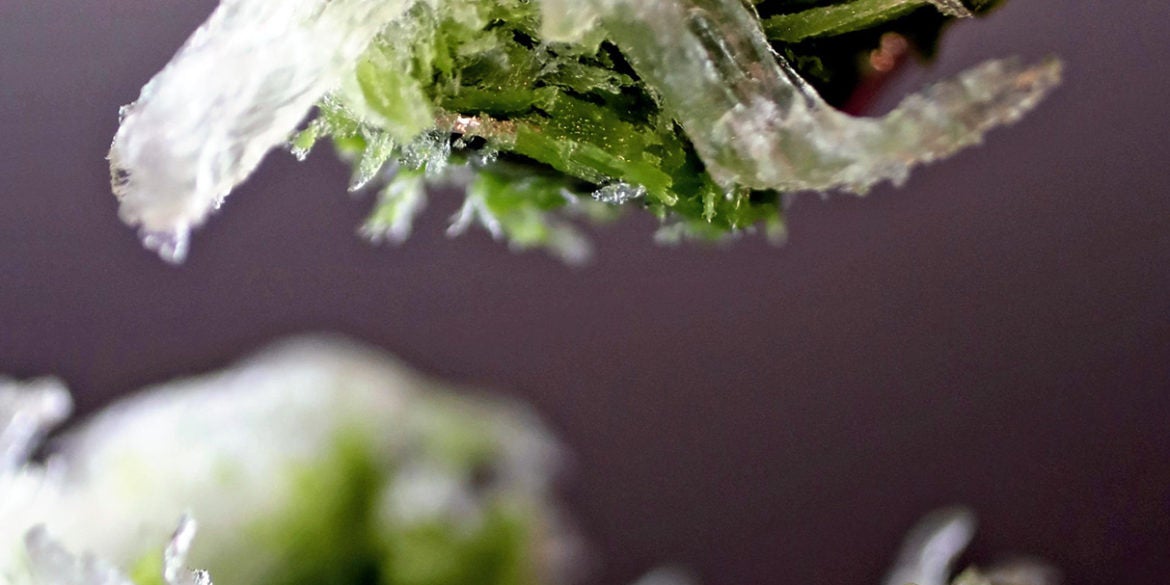 TOKYO — As the boom for kakigori shaved ice continues, an increasing number of shops in Japan are using natural ice, in addition to offering a wider variety of flavors and presentations. Frozen slowly in cold weather, natural ice brings a distinctive flavor to this summer treat.

Ryusuke Koike, the representative director of the Japan Kakigoori Association, which comprises operators of kakigori shops and enthusiasts, took me to Mikazuki Hyokaten in Kashiwa, Chiba Prefecture.

Shop manager Yoshiyuki Ikeda showed me a block of natural ice, which contained almost no air bubbles and was remarkably clear. His shop buys natural ice from a maker in Nikko, Tochigi Prefecture.

To produce natural ice, water from an underground source is poured into a pond in a mountainous area where it freezes in the severe cold of winter. Employees continuously remove dead leaves that fall on the ice and keep the surface clean. It takes about 10 to 20 days to complete the production of natural ice.

I was served a bowl of kakigori that looked like feathers piled in many layers. You can see how delicate each thin piece is, and I found myself sighing in admiration at this beautiful dish.

From the nine flavors of syrup on offer, including matcha green tea, I chose plum. I put a scoop of the shaved natural ice into my mouth, where it melted mildly and lightly in a way I’d never experienced. The syrup had a very sophisticated flavor thanks to its mild sweetness and refreshing sourness.

“Natural ice is characterized by its fluffy texture,” Koike said. “This shop excels at preparing its own syrups, which are designed to make the flavor of the natural ice stand out, and at how it shaves the ice.”

The items on the shop’s menu change every month. Prices start at about ¥700 for a bowl of kakigori with one of its homemade syrups.

Ikeda travels to Nikko every year to take part in work to cut out the natural ice. “The technique [for producing natural ice] has been established based on the knowledge of people in the past,” he said. “I want to carry on the culture of shaving natural ice — which locks in the essence of ‘winter’ — and enjoy its flavor.”

Japan’s history of shaved ice goes so far back that it’s even referred to in “The Pillow Book” by Sei Shonagon, a female writer who served in the Imperial court during the Heian period (794 to the late 12th century). The aristocracy at that time had chunks of ice cut in winter and stored them in icehouses to enjoy in summer.

It wasn’t until the Meiji period (1868-1912) that many ordinary people became able to enjoy eating shaved ice.

Kirihara, a kakigori shop in Hayama, Kanagawa Prefecture, also uses natural ice. Manager Tomoko Nakamura buys various fruits, such as strawberries, mikan tangerines and peaches, from farmers across the nation to make the shop’s own syrups.

Customers pour the syrups over the shaved ice by themselves, so they can appreciate how delicious the natural ice is. The shop is open for a limited time from May through September.

“Kakigori is a summer staple,” Koike said. “I hope people visit various shops while paying attention to the ice itself, the flavors of syrups and how the ice is shaved.”