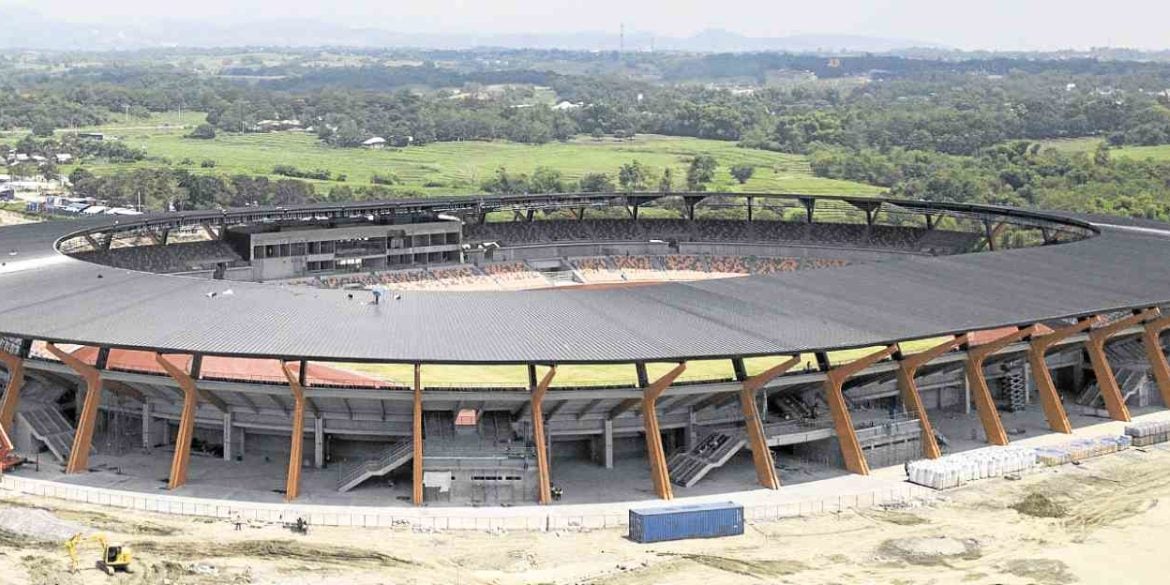 The stadium design is stripped to its barest essentials for easy maintenance. —Photos by Ed Simon of BluPrint

Two new landmarks in Pampanga are the cornerstones of the city of the new millennium. The stadium, shaped like a volcanic crater, and the aquatic center, inspired by the fish pen, will be visible from the Subic-Clark-Tarlac Expressway.

The sports complex, built in time for the Southeast Asian Games, will be turned over to the Bases Conversion and Development Authority by end of August.

Designed by Budji + Royal Architecture + Design, the sports complex marks the completion of the first half of the first phase of development of the New Clark City. The stadium, aquatic center and the athlete’s village are part of the New Government Administrative Center. Touted as the “iCloud of Malacañang,” it will be the future center of administrative functions, says architect Royal Pineda.

The first phase will include government offices, the Bangko Sentral ng Pilipinas, housing for government workers and sports facilities.

“The concept of this modern Philippine city is that it was inspired by nature and that we are using materials from the area,” Pineda says.

The big news has been the rise of the Olympic-standard stadium and aquatic center, but built with a sense of place.

Budji + Royal drew references from Pampanga’s symbols—Mt. Pinatubo, the parol, or star lantern crafts, the baklad, or fish trap and the capiz from the windows of ancestral homes.

“From an aerial view, the caldera of Mt. Pinatubo is similar to the form of the stadium. We were inspired by the volcano’s organic color, graphite,” Pineda says.

The stadium makes use of lahar, volcanic mudflow. “In the master plan, lahar will be the new fiber of the city. It will be used for the skin of the architecture, the finishes and the streets,” he adds.

Moreover, graphite mitigates the glare of the sun.

In a tropical country, Budji + Royal addresses humidity with the open-shed architecture and a raised roofline for air circulation for both facilities.

The insulated, oval roof of the stadium makes the space cooler.

“The stadium looks like a basin. If there isn’t proper ventilation, the field of play and seating areas will be hot. On all sides, there are wind tunnels as perforations of the structure that enable cool air to flow inside,” he explains.

Since the stadium is not enclosed, the heat will not be trapped inside. The cross ventilation allows the wind to enter and prevents heat building up. The cooling effect of the wind tunnels will make spectators feel comfortable in the bleachers.

Pineda points out that the architecture is stripped down to its barest essentials. The structural elements—the roof beams, the columns and rafters—
also serve as an aesthetic statement.

“They were put together in a poetic composition to recall the frames of the body of the parol,” he says. “The design is honest. The idea is to work with the necessary elements. This is where we want the poetry to happen. With the right silhouette, proportion and execution, there is no need for decorative elements.”

The structured angled columns that recall the skeleton of the parol act as frames to support the tiers of benches. Their legs protrude into the rooms—the lobby and lounges—underneath the bleachers, lending an interesting composition.

These orange columns inject a vibrant contrast to the graphite lahar. Budji Layug, chair of Budji + Royal, says lahar is a unifying element in the exterior and interior finishes. “It is immediately recognizable as distinctly Filipino. We let the orange beam protrusions become a highlight of the interiors,” he says.

The structural frames are exposed for easy upkeep. Aluminum cladding and embellishments can pose maintenance issues in the future, says the architect.

The lahar is unpainted, leaving a naked effect. “The organic surface gives the structure an identity and a sense of place. This is our new canvas for the city. The lahar concrete will make a difference in creating efficient architecture,” Pineda says.

The simplicity of the design also makes provisions for additional elements and technology in the future.

“It is designed to be ready for any future upgrading. When new technology comes in, the open ceiling allows more utilities without dismantling the ceiling board, chipping the walls and repainting. This design cuts down maintenance costs,” Pineda says.

The architect defines the approach as “practical luxury,” in which the elegance is derived from the design and architecture and not necessarily from expensive materials.

“We can create something beautiful to improve the lifestyle in the Philippines from basic or humble materials,” Pineda says. “These can work to look luxurious with the creative minds of Filipinos. Luxury is not about curtain walls or expensive Italian stones to clad columns and floorings.”

For the 2,000-capacity aquatic center, which was designated for water sports, Pineda drew references from the silhouette of the vertical and diagonal lines of the fish traps along the seaside.

The structure is an abstraction of the baklad, emphasizing the rhythm and discipline of the trusses.

The bamboo color theme blends with the environment. The Olympic-size pool opens to views of mountain ranges, fields and trees.

Lighting plays a role in enhancing the design purpose. UPVC for skylight was used to suggest the translucency of capiz.

“The capiz—the window material of old houses—is from the shell, an element of water,” Pineda says.

The skylight evokes the image of an abstract capiz window. “At daytime, natural light flows into the pool and the uPVC diffuses the glare. We manage the intensity of the light so that it would be comfortable for everyone inside,” he says. “In the evening, when the place is lit up, the place glows like a lantern.”

The pointed roof eaves, designed to control the light and provide shed, were likewise inspired by the parol frames. The long-span metal and uPVC overhangs add a layer of translucency and romance.

“The local references will enable the Filipinos to embrace our design because of their familiarity,” Layug says. “Yet we are modernizing them to make them global so that the world will recognize that we are a progressive country.” —CONTRIBUTED