Gaudi’s Sagrada Familia: It was like meeting a celebrity | Inquirer Lifestyle ❮ ❯ 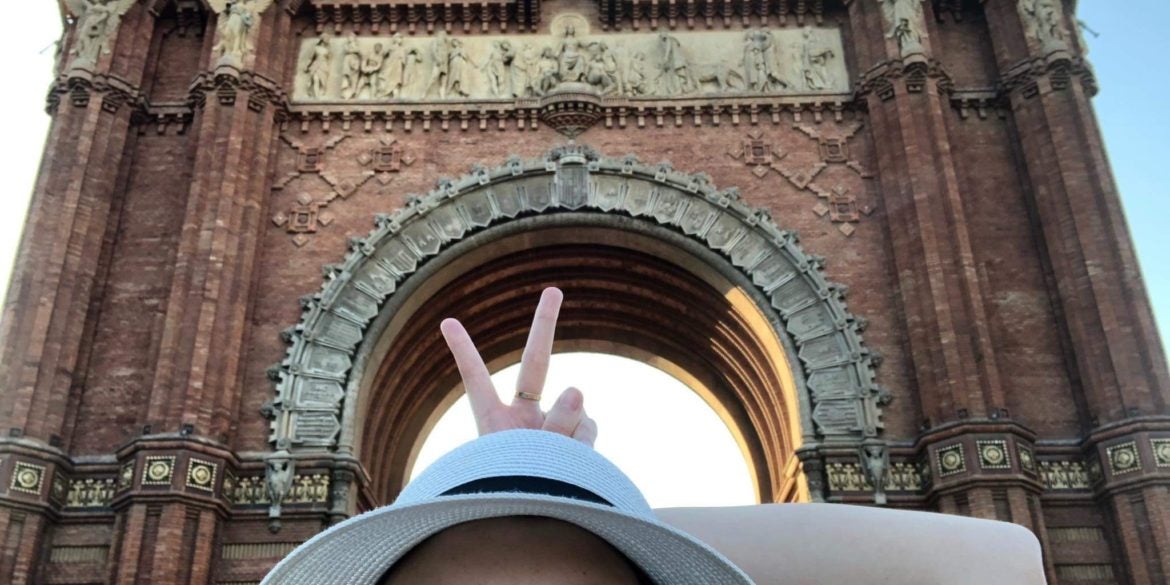 The author being silly behind the Arc de Triomf de Barcelona.

Gaudi’s Sagrada Familia: It was like meeting a celebrity

I remember praying, talking to God about nothing complicated, just being aware of His presence in Gaudi’s gift to Him

The natural beauty of the world has always been indecipherable. It is a phenomenon we, more often than not, are unable to fathom.

I am familiar with the feeling when all your senses are simultaneously stimulated by the beauty of a view; the solemnness of the ocean, the grandeur of a mountain.

To me, the only thing that could take my breath away was nature. I soon learned that I was a fool, to be looking only at the raw creations God has so divinely made. I was proven wrong as I stepped foot into the Sagrada Familia.

It was my first solo trip to Barcelona since I started studying in Navarra, almost three years ago. It was exhilarating, terrifying and, most of all, freeing. The liberty that comes with traveling alone is a feeling that everyone deserves to experience.

As I walked into my 6 a.m. train, bag in hand, my brain was too foggy from sleep to completely understand the situation I was getting myself into. I was fortunate enough to visit Barcelona as a child but to be able to experience it as an adult, with no idea how to navigate the city was nerve-wracking, to say the least. My rather reserved and careful personality did not help as well.

This was possibly the first time I had gone against my own logic, hopping on a train to a city I had almost no experience in.

My expectations for the city were not too high. The political atmosphere of the place was not the best in terms of its attempted succession. I knew there were hagglers and thieves and people of that sort.

The violence that put Barcelona in the spotlight did not calm my nerves. Therefore, I was not expecting much.

I was soon proven wrong. Palm trees dotted the docks where the boats came in from their daily sail… The smell of jamon serrano and manchego permeated the air… People busking whatever instrument they could play from street to street gave life to the masterpiece that was Barcelona. I couldn’t have been happier roaming around a city.

Little did I know I was only scratching the surface of this Mediterranean paradise. Walking through random alleys armed with Google maps and “Barcelona” by Ed Sheeran blasting on my phone, I found myself facing the Sagrada Familia Cathedral.

I remember slowly approaching it, hesitant to see its brilliance in person. I almost could not believe I was about to see (debatably) the most acclaimed cathedral in the world. I’d only seen it in pictures. It was like meeting a celebrity, really.

I quickly made my way to buy tickets to get the full experience of the cathedral. I was provided with a private digital tour guide and a pamphlet.

I am no architect but the facade, without a doubt, is the most intricate architectural creation I have seen. However, it wasn’t the design of the exterior that truly impressed me. Gaudi, the master of this creation, was a genius with regards to the thought and essence he put into the composition of the church.

It was evident how he put his soul into his craft, truly thinking and deliberating how his love for God could be expressed in his architecture.

Just seeing the exterior of the Sagrada Familia already made my heart beat a little faster. Its greatness cannot be denied. The cathedral’s height itself is already breathtaking, but its design creates an imposing image that any traveler or local will not and cannot forget.

Wiping my teary eyes as I walked around the balcony of the church, I deluded myself into thinking that this was the main event. That the exterior was the true masterpiece and the inside was merely a detour. But, like I said, a sense of delusion clouded my judgment.

My first few moments inside the Sagrada Famila were unexplainable. I could not express the emotions that rushed through me. It made my knees buckle, my eyes tear, and my heart swell.

The columns that held this great structure up blossomed into branches depicting the trees of a forest. The stained glass reflected different shades of red and blue hues onto the church floor. The ceiling mimicked those of flowers that somehow gave the church a tranquil atmosphere.

There were so many things to take in at once. It was very overwhelming.

As I walked around the basilica, the digital guide allowed me more insights on Gaudi’s mindset. He was greatly inspired by nature, thus resulting in the interior designs of the church. He admitted it was an ode to God’s creations of the natural world. He even made the structure one meter below the tallest mountain that stood parallel to it as he believed that “nothing manmade should surpass any creation of God.”

That, in itself, made me fall deeply in love with the Sagrada Familia. At that moment, I decided that it was now my favorite place.

As I sat on a pew looking up at the unbelievable view, I remember praying, talking to God about nothing complicated, just being aware of His presence in Gaudi’s gift to Him.

I truly believe that simply just being in the church could turn an atheist into a believer. The intricacy and passion evident in the cathedral showed me that only God-given talent could create something so magnificent.

I wrote down my thoughts in the hope of inspiring the reader to travel, to get out of your comfort zone and see as much of what this world has to offer. I thought that I would only be fascinated with things like mountains and beautiful views or even just the calmness of the ocean.

But little did I know I would completely fall in love with a church, a structure made by Antoni Gaudi. A simple man like you and me.

I read a quote, “The world is a book, and those who do not travel read only one page,” and I have not believed something more ever since.

Note: The cathedral has huge Philippine clam shells donated upon request of Gaudi himself! The shells are the holy water fonts in the church! There’s a sign of the donation written in Spanish and Filipino. Thanks to the efforts of then consul (now ambassador to Brussels) Eddie de Vega.—CONTRIBUTED