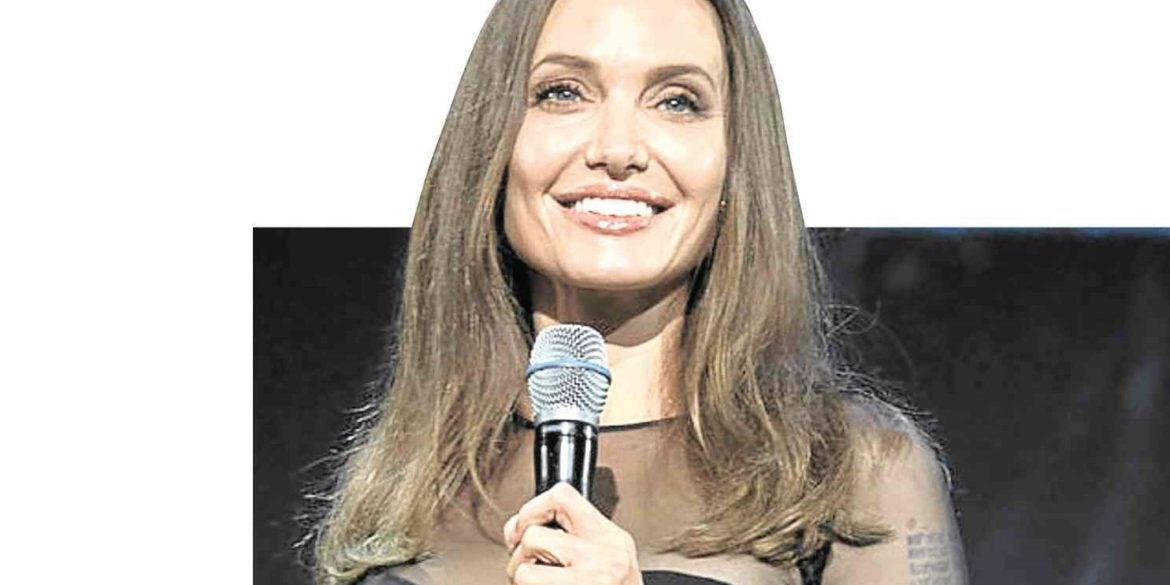 Angelina Jolie will be in “Maleficent: Mistress of Evil” and “The Eternals”

Aladdin and Jasmine rushed past while Belle and Spider-Man stood patiently in a line that snaked around Anaheim Convention Center. In one corner, a group of princesses twirled in their gowns. “Oh no,” one of them said, clutching her eye. “My eyelashes!”

Another princess approached them, this one in jeans and a white shirt. But with Pascal the chameleon on her shoulder and her golden hair in a long, long braid, it was undeniable who she was. Rapunzel spoke, “Do you need lash glue?”

‘Oh, that’s so nice of you,’ the princesses cooed.

Rapunzel joined their circle. “You’re going as Ariel on Sunday? I am, too! We have to take a picture.”

Welcome to D23 Expo 2019, where Disney Princesses come to life and mix and mingle with Marvel superheroes, Star Wars personalities and Pixar characters. It’s a remembrance of Disney’s past, a celebration of the present and an exciting glimpse into the future. The three-day bi-annual gathering, which started in 2009 and is presented by D23: The Official Disney Fan Club, is dubbed “the Ultimate Disney Fan Event.” This year, Disney fans of all ages traveled from 47 countries and 50 states of America to attend the expo which was held from Aug. 23-25.

“This expo is our way of saying thank you to the biggest Disney fans in the world,” said Bob Iger, chair and CEO of The Walt Disney Company. “The D23 Expo takes you inside our company, giving you an all-access pass to go behind the scenes and see works in progress and to meet and hear from gifted storytellers, creative visionaries, and remarkable people… Hopefully, you come away awed and inspired, as I am every day.”

He kicked things off with the first of many surprises at D23: Christina Aguilera performing the song “Reflection.” Christina, who started her career as a Mouseketeer and who recorded “Reflection” for the “Mulan” soundtrack, was one of 12 people being honored as a Disney Legend at D23 Expo, a list that includes Hans Zimmer, Diane Sawyer, Barnett Ricci, James Earl Jones, Wing T. Chao, Robin Roberts and Bette Midler. “The award is the highest honor our company bestows on anyone,” said Bob.

“This is so special. I’m shaking. I’ve been holding back tears all day,” Christina told the crowd of almost 7,000 that had gathered at Hall D23 for the Disney Legends ceremony. Many of the fans there had lined up overnight to be able to attend. “This is way cooler than a Grammy, I have to say,” she said.

Bob spoke about new Disney Legend Robert Downey Jr. and his portrayal of Iron Man: “Every now and then, phenomenal actor and a fantastic character come together. And the result is more powerful than anyone could ever have imagined.”

In his speech, Robert paid tribute to fellow honoree Jon Favreau who Robert has worked with on a number of Marvel films.

“I thank Disney and all of you for the opportunity to tell these stories and help bring magic to the next generation,” said Jon, who opened his jacket to reveal a plush lion, a nod to the 2019 remake of “The Lion King” which he directed.

Actress Ming-Na Wen, who gave Mulan her voice, is another new Disney legend. She’s a Marvel hero and she joins the Star Wars family, too, in the upcoming Star Wars series “The Mandalorian.” “I have hit every bucket list because of Disney. I used to pray to God, Buddha and the Force when I was a kid. It’s astounding to me.”

Kenny Ortega, director of “High School Musical,” said he cried when he received the letter telling him he was going to be honored as a Disney legend. “The Mickey Mouse Club set me on my life path. As a kid, I dismantled our television because I wanted to climb through and join the club. Today is extraordinary. I’m officially in the club.”

At the first ever Disney+ showcase presentation, another crowd of 7,000 got a look at what’s going to be streaming on the service which launches in the US on Nov. 12. They got excited about “High School Musical: The Musical: The Series,” the Phineas and Ferb original movie called “Candace Against the Universe,” a series of Pixar shorts called “Forky Asks a Question,” the live action retelling of “Lady and the Tramp” and a brand new Lizzie McGuire series that will still star Hilary Duff. “It’s so great to be home,” Hilary said.

Marvel Studios and Lucasfilm are working on a lot of content for Disney+, too. Loki will have his own series on Disney+. In a video, Tom Hiddleston told the audience, “This journey you and I have been on isn’t over yet. In fact, it’s only just begun.”

Marvel also has Wandavision which stars Paul Bettany (Vision) and Elizabeth Olsen (Wanda Maximoff) alongside Kat Dennings and Randall Park who will reprise their roles from “Thor” and “Ant-Man and The Wasp.” “This is going to be so wacky and fun,” said Elizabeth.

For Star Wars fans, there’s the highly anticipated “The Mandalorian” which Jon Favreau pitched to Lucasfilm president Kathleen Kennedy. Jon said, “If you’re a Star Wars fan, we got you.”

Diego Luna and Alan Tudyk will star in a Rogue One prequel series for Disney+ “I’ve been waiting for this call,” said Diego.

“I am thrilled to bring out a beloved member of the Star Wars family,” said Kathleen.

The crowd went wild as Ewan McGregor stepped onto the stage.

“Can you please ask me? Am I going to play Obi Wan Kenobi again?” said Ewan said.

“We have all the scripts written. We are ready to start shooting next year. We could not be more excited,” said Kathleen about the series.

Those at the expo got the chance to sign up for three years of discounted Disney+ membership, becoming members of the Disney+ Founders Circle.

A sea of Marvel cosplayers had taken over the Grand Plaza Fountain for a photo shoot. From across the plaza, a man who looked eerily like Stan Lee watched as the superheroes posed. “Of course, he made a cameo,” someone said. Stan, who had been honored as a Disney legend at the D23 Expo in 2017, passed away in November 2018.

There were all kinds of art at D23 Expo. Outside the convention center, graffiti artist ARCY was working on a big mural featuring Black Panther, Woody, Mickey Mouse, Elsa and R2-D2. At the Jelly Belly booth, Kristen Cummings was using jelly beans to complete a painting featuring Anna and Elsa. The painting, which took 100 hours to complete, would become part of the Jelly Belly permanent collection, just like Kristen’s Darth Vader portrait, which she created using 12,000 pieces of jelly beans.

At the Heroes and Villains: The Art of the Disney Costume exhibit, the spotlight was on Cinderella. Various incarnations of the fairy tale princess’ gown were featured.

Other iconic clothing from the Walt Disney Archives were also on display including Julie Andrews’ and Emily Blunt’s Mary Poppins outfits, Amy Adams’ gown from when she played Giselle in “Enchanted,” and Angelina Jolie’s Maleficent costume.

Movie fans will see Angelina as Maleficent again in “Maleficent: Mistress of Evil.” “I missed her and I loved playing her,” she said.

“How about that sizzle, it almost feels like a mic drop,” said Alan Horn, co-chair and chief creative officer of Walt Disney Studios, after playing a reel of what’s coming to the big screen at the Studios panel.

The fans inside Hall D23 roared in excitement when Marvel Studios president Kevin Feige and Black Panther director and co-writer Ryan Coogler confirmed that a Black Panther sequel will come out in 2022.

“We are busy making this movie “Black Widow” for all of you,” said Scarlett Johansson in a video from London.

Dwayne Johnson and his “Jungle Cruise” costar Emily Blunt tried to outdo each other at the panel. He entered the venue while riding on a boat while she was driven onstage in a vintage car. The two showed two versions of the film’s trailer, each one putting the spotlight on their character.

The live action adaptation of “Mulan” is another highly anticipated movie. The footage screened at the panel had audience members in tears.

Before leaving the stage, Tom, who is loved by Marvel fans as Spider-Man, said, “Hey everyone, it’s been a crazy week but I want you to know that I love you 3,000.”

There were also revelations about “The Eternals,” “Cruella,” Pixar’s “Soul,” “Raya and the Last Dragon” and “Frozen 2.”

Fans in all sorts of costumes roamed the expo floor on all three days: Japanese Iron Man. Ursula. Rafiki. Ghostbusting Beast and Belle. Thors of all sizes. A man driving himself around in a pirate’s boat. Captain America and Moana. Star-Lord and flight attendant Elsa. Ursula. Lumiere. Carl and Ellie.

Disney’s other brands including Hulu, National Geographic and 21st Century Fox had their own pavilions. The lines for Dream Store, which sold exclusive D23 Expo merchandise, were always long. There was booth after booth of vendors selling all kinds of Disney, Marvel, Star Wars and Pixar collectibles.

Disney Legend Bob Gurr, an Imagineer who is known for working on the design of many Disneyland attractions was there signing autographs and posing for photos. Bob D’Arcy, Disneyland’s first host, was there, too. So was animator

Rick Farmiloe, a Disney animator who worked on characters from “Aladdin,” “The Little Mermaid” and “Beauty and the Beast.”

Guests signed wooden benches at the booth of the Walt Disney Hometown Museum. The benches which will be brought back to the museum in Marceline, Missouri.

On the Center Stage, Tiffany Young of the K-Pop group Girls’ Generation sang “Can You Feel The Love Tonight?” from “The Lion King” soundtrack.

At the Parks panel, Bob Chapek, Disney’s chair of Parks, Experiences and Products, revealed many exciting projects headed to Disney parks, cruises and resorts all over the world including a collaboration with Cirque du Soleil, Avengers Campus, the Star Wars Galactic Starcruiser the transformation of EPCOT.

Dick Van Dyke made an appearance to announce the first ever Mary Poppins attraction at any Disneyland park and he was met with a standing ovation.