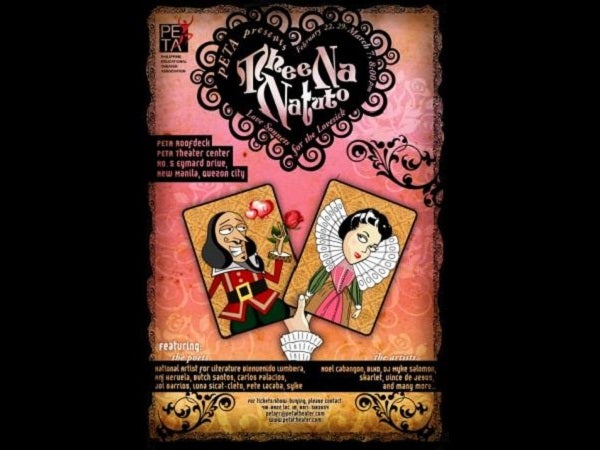 “Thee Na Natuto” is a Shakespearean musical experience like no other

PETA’s Shakespeare offerings for the love month of February

MANILA, Philippines—William Shakespeare has written a hundred sonnets and plays about the irony, tragedy, and splendor of love. He wrote about love from all angles, encompassing all ages, status and cultures. He has looked at love from a perspective of a desperate lover, an aging father or a loyal servant. This love month of February, Philippine Educational Theater Association (PETA) has three Shakespeare offerings for all love moods and persuasions.

This concert is a celebration of love in all its forms – old and new, unrequited or unconditional. “Thee Na Natuto: A Sonnets Concert for the Lovesick” is a musical experience that transforms Shakespeare’s sonnets into Filipino songs featuring 12 Filipino poets translating the verses (National Artist for Literature Bienvenido Lumbera, Pete Lacaba, Joi Barrios, Luna Sicat-Cleto and many more), as well as several artist-musicians (with the likes of Noel Cabangon, Vince de Jesus and DJ Myke) composing and performing the tunes.  The sonnets concert will happen on the nights of February 22, 29 and March 7 at the PETA Theater Center Studios.

“Haring Lear” features a traditional Shakespeare all-male cast helmed by theater stalwart Teroy Guzman who plays the role of the aging monarch, Haring Lear. The play runs every Friday (7:00PM) Saturday and Sunday (10:00AM/3:00PM) from January 27-March 4 at The PETA Theater Center. ‘Haring Lear’ is produced by PETA in partnership with British Council and National Commission for Culture and the Arts.

Have children enjoy and fall in love with Shakespeare. UK theatre artist Tim Crouch re-imagines “Twelfth Night” through the eyes of Shakespeare’s most pent-up steward. “I, Malvolio” is a wild, hilarious and unsettling rant from a man adrift in front of a cruel audience, a man notoriously abused.

Tim Crouch’s latest play, “I, Malvolio” premiered at the Brighton Festival last May 2010, and will be in Manila by the second week of Feb. “I, Malvolio” is a project of PETA and British Council.

Whether you are young lovers like Romeo and Juliet, or someone suffering unrequited love like Helena and Demetrius in A Midsummer Night’s Dream or a love fool like Malvolio, there’s something for you at PETA this February.