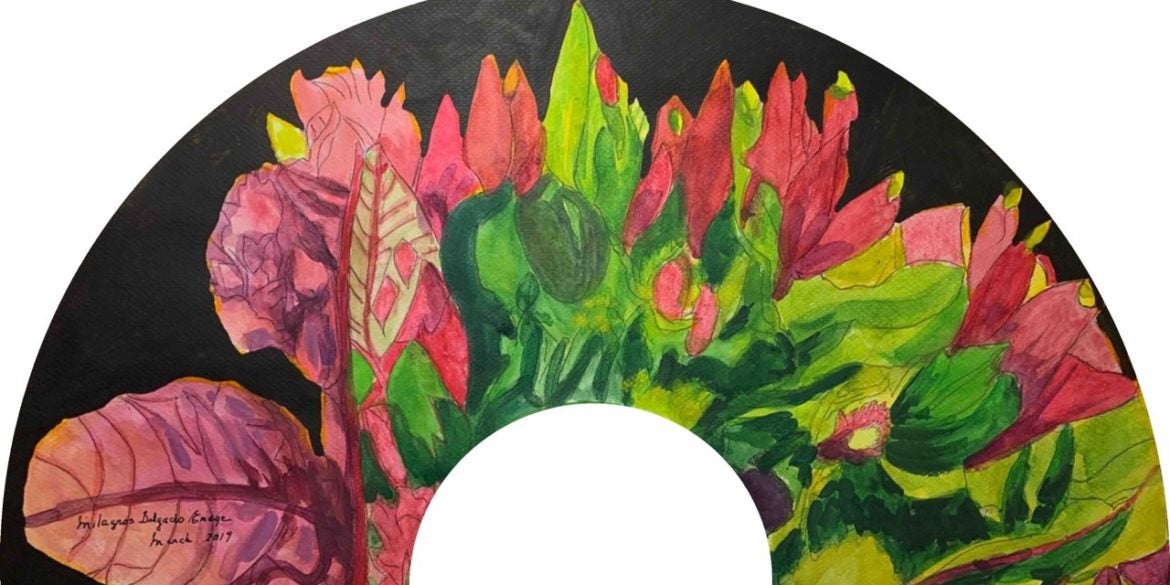 As centenarian prepares to open her art exhibit, she dwells on life’s moments—not just the milestones

“I don’t want my age mentioned.”

Milagros Delgado Enage, fresh from the hairdresser’s, looks quite serious as she says this.

“But Mom!” her daughter Marimil Villareal starts to protest, and then Enage laughs.

Among other things, she still has quite the sense of humor.

Age is just a number, but when it’s a nice, round three-digit one, it’s a cause for celebration all around.

When Enage launches “Ageless Inspirations,” her second exhibit of paintings today, Sept. 1, she will be just 12 days shy of her 100th birthday.

Apart from two hip replacements that necessitate the use of a walker (and occasionally a wheelchair for longer distances), Enage is about as hale as can be.

“She eats anything and everything, in moderation,” says Villareal. “She doesn’t take any medication, no maintenance.”

Her mother doesn’t even take pain meds when her hips bother her, she adds. Acupressure and cold laser therapy have been more effective. A glass of green juice in the morning and she’s good to go. She’s in better shape now than she was 20 years ago.

What’s her secret? we just have to ask.

“My secret?” she answers. “Doing the things that give me satisfaction. Things that can be of help to others.”

On most days, it’s painting that occupies her waking hours, mostly still lifes and landscapes done in watercolor, her preferred medium. She starts in the morning, takes a break at midday to go to Mass and have lunch, then starts painting again until mid-afternoon when she takes a nap.

“I feel very much elated when I’m painting,” she says. “I just feel it.”

An eye for beauty

It’s all the more remarkable considering that she lost the sight in her right eye in a childhood accident, when a careless yaya dropped her. As if to compensate, she’s always had an eye for beautiful things.

Enage is one of the pioneers of the heritage conservation movement. In the early 1960s, when virtually no one was interested in Filipino culture, Enage started collecting antiques. Parishes around the country were literally throwing out old santos, altarpieces, paintings and other now-priceless artifacts, replacing them with new ones. Enage would pick them up, often just for the asking.

When her brother Antonio Delgado built the Manila Hilton—the country’s first five-star hotel—on UN Avenue in Ermita, he asked her to help in giving it a uniquely Filipino identity.

“I began to nurture big ideas for the hotel,” she later wrote in her memoirs. “I boldly challenged [Antonio]: Let’s make Manila Hilton a repository, a showcase for our country’s heritage in art, culture, history and tradition.”

With this goal in mind, she established the Manila Hilton Art Center.

At the time, the idea of featuring art in a plush hotel—Filipino art, at that—was unheard of.

Enage formed an advisory committee including some of the leading lights of Philippine art and culture: Fr. Horacio de la Costa, Carmen Guerrero Nakpil, Alejandro and Alfredo Roces, Emmanuel Torres, Leo Benesa, Purita Kalaw-Ledesma, Arturo Luz and F. Sionil José. With their guidance, she commissioned sculptures for the Hilton lobby, including “Filipinismo,” a large frieze by Carlos “Botong” Francisco, and a pair of wall carvings in molave by Napoleon Abueva, both depicting scenes from Philippine life.

In no time, the Manila Hilton Art Center was showcasing the works of the leading Filipino artists of the day including Fernando Amorsolo, Vicente Manansala, Jose Joya, Cesar Legaspi, Federico Alcuaz, Onib Olmedo, Ed Castrillo, Raul Isidro and others.

If the Art Center was au courant, the Folk Arts Center, which Enage opened just across from the gallery, was retrospective, showcasing the country’s rich heritage with exhibits of antiques, Spanish colonial jewelry, carvings, costumes.

Apart from exhibits, the Manila Hilton Art Center held classes and workshops in printmaking, sculpture, ceramics and other crafts. It became a cultural center before there was a Cultural Center of the Philippines (CCP).

“Those were the years I felt I had stopped growing in inches and years, for I had grown in heart, mind and soul … especially as a Filipino woman,” she wrote in a self-published essay collection.

She had never had an interest in drawing or painting as a child; it was music she loved, having studied voice with the good German nuns at Holy Ghost College.

In her youth she even harbored dreams of singing on a concert stage. Perhaps being immersed in visual art awakened in her a desire to create her own.

“He influenced me a lot,” she says.

Attesting to this is a print she made in 1964—possibly a lithograph—an abstract monochrome that echoes contemporaneous work by Luz and Joya, remarkably accomplished for someone who, until recently, had been a full-time housewife and mother of eight.

Even to the untrained eye, the composition and the rhythmic interplay of forms and shades reveal an advanced conception and an aptitude for the visual arts.

Printmaking is a rigorous, methodical discipline. It involves creating the design, transferring the design to a plate through physical or chemical means, and pressing the prints from it with a large machine press.

In contrast, Enage’s next pursuit, Chinese painting, which she studied with Master Hau Chiok, is quite the opposite. Working quickly with ink and brush on rice paper, the painter aims for lightness and spontaneity of expression.

“My mother always told us, ‘It’s never too late to learn something. The brain is like a sponge, it absorbs and absorbs,’” recalls Villareal.

Except for a brief period, when she lost the urge to paint after a family tragedy that pains her to this day, and which she prefers not to speak of, she has been painting ever since.

In 2013, a workshop with the Antipolo-based artist Pol Mesina rekindled her passion for painting. She has been a prolific painter ever since. She has shown her work in two group exhibits and a solo exhibit in 2017, where she managed to sell 80 percent of her paintings.

“Being an artist is in her blood,” says Mesina.

She already has her own idea of what the finished artwork will look like, he adds. He merely offers advice on technique and execution. She often returns to favorite themes, such as flowers and landscapes, but each one is different, he says.

“Ageless Inspirations” will feature 100 works culled from over 400 pieces. Of these 20 will form a mini-retrospective, including some of the prints she made with Manuel Rodriguez Sr. and some of her Chinese paintings.

Her paintings, however, offer only the barest hint of the rich inner life Enage has led.

For a deeper look, one must turn to her writings, which were gathered and privately printed by her children two years ago. The clarity of her English prose and sense of narrative flow suggests a native talent for expressing herself in words.

One must remember that when Enage was born, World War I had just ended, the Philippines was still a US territory, and many people still spoke Spanish. Manuel Quezon had just begun negotiations in Washington, D.C. for the country’s eventual independence. It was a different world in which she lived.

Belonging to the prominent Delgado clan on her father’s side and the equally prosperous Tambuntings on her mother’s, Enage grew up with the genteel pastimes of the upper class.

Writing longhand in her distinctive small Holy Spirit script, she writes about these idyllic “Peacetime” days in many of her essays.

Apart from reminiscences of her parents and siblings, and portraits of her children and grandchildren, she also writes about her schooldays at Holy Ghost (now College of the Holy Spirit) where she learned to speak English with a slight German accent, traveling to Baguio by train in the 1930s, the old prewar Manila she knew.

She chooses not to dwell too much on the more tragic aspects of her family history, though these could fill another volume: the family was forced to flee their house in Mendiola during the Japanese occupation, two of her brothers survived the Bataan Death March, and one of her nephews was in the 1963 plane crash commemorated in the Quezon City district known as 11th Jamboree.

A portrait of Enage with her husband, Felipe (who passed away in 2000), taken just after the war, shows a self-possessed and confident young woman who knows what she wants out of life.

“We’ve lived long enough to know that life never really calms down enough to keep putting off for tomorrow what we can do today,” Enage writes in an essay titled “In Praise of Ordinary Life.” It’s as close as she has come to putting her philosophy of life in words.

“For life is movement, life is change. Nothing stands still. Why make life one long postponement?”

She chose to spend the first half of her life raising a family, now grown to eight children, 18 grandchildren and 13 great-grandchildren. When they were ready to be on their own, she turned her energies to creative pursuits.

“Be grateful to be alive. Every moment as it comes should be accepted, blessed and thanked for. It may well be the last moment of our lives. We’ll receive the rewards at the end of time, not for having been achievers but for the struggles, the hard work, the heartaches, the pains.”

“Who was it who said ‘Life is not a matter of milestones but of moments?’ Truly, life is made up of moments. How we spend them, not how much we have of them, will spell the quality of our life.”

On that account, Mila Delgado Enage has no cause for regret.