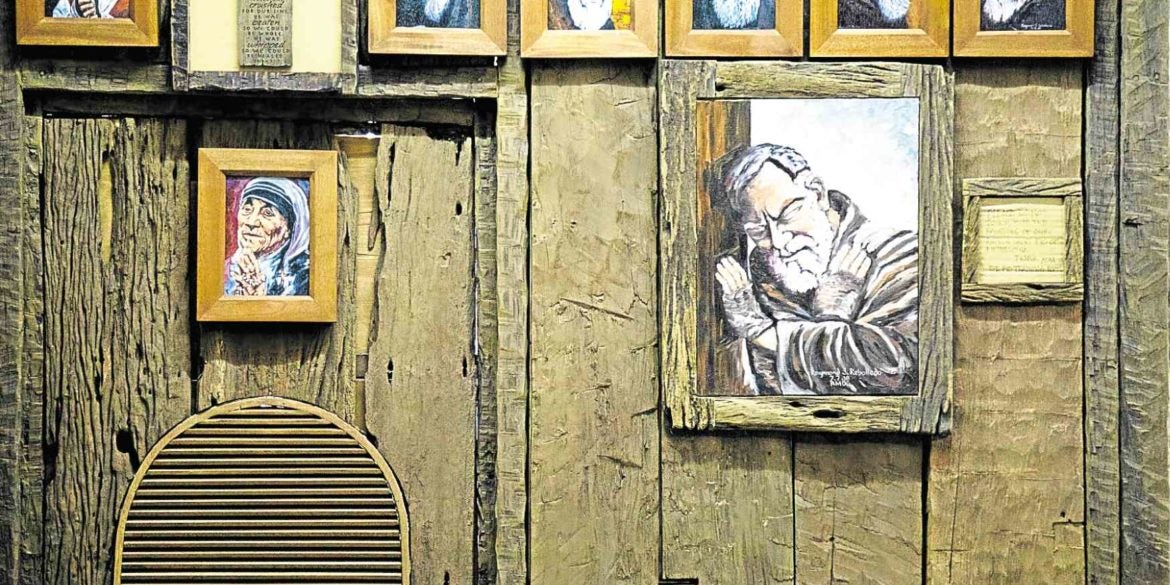 “Metanoia” consists of paintings on distressed wood of the Capuchin saint Padre Pio of Pietrelcina and other canonized figures.

Paintings depicting Padre Pio and other saints and spiritual themes by artist Raymond Rebolledo will be exhibited in  “Metanoia,” starting today up to Sept. 16 at Mira Art Gallery at The Pop Up in Katipunan-Xavierville, Quezon City.

The exhibit-sale will benefit  the Aeta children of Sacobia, Clark, and Mt. Pinatubo, Pampanga, and the orphans at the Research and Study Center for Children under the Department of Social Welfare and Development.

Rebolledo, a  veteran cake decorator and visual artist,  will showcase about 20 paintings inspired by his devotion to the canonized Capuchin saint, Padre Pio.

Rebolledo works for the family-owned  Dexter’s Bakeshop and Coffee Shop along Katipunan. He had long wanted to paint and he was able to do so amid a deepening devotion to the Franciscan saint from Pietrelcina. “It’s an answered prayer for me,  since I’ve been wanting to learn how to paint,  but work and time would not allow me to pursue this dream.   Everything falls into place and this time,  its God’s perfect timing, as they say.”

In  February 2016, while celebrating his 50+ years  birthday, Rebolledo reflected on his  life.   He   started  serving in the Padre Pio Center in Libis, Quezon City, as a lay minister.  He became inspired to paint Padre Pio and other saints.

“I was very overwhelmed after I painted St. Pio’s image.   I posted it in social media with the caption, ‘I dream to paint and I painted my dream.’”

He received positive comments and friends asked if he could paint for them.

His first painting of Padre Pio measured 36” x  24”,  and  he donated  it to the Padre Pio Center  in Libis, Quezon City, through Ramon Rodriquez.    The work was followed by more inspirational paintings of the saint, some of which are  displayed in a special room at the center. Many people visit the center seeking physical and psychological healings, as well as financial and personal remedies.

Even before his devotion to Padre Pio, Rebolledo had been with Fat Bike Philippines and doing outreach work for the Aeta cultural communities in Central Luzon.

Rebolledo said his devotion to the saint had helped him hurdle personal challenges. He called his devotion a conversion, hence the title of his debut exhibit, “Metanoia.”

Rebolledo uses distressed wood  as frame for his artworks, which according to him, “adds character to his painting, where each painting is distinct and unique.”

Each painting of Padre Pio, said Rebolledo, is a “labor of love.” Every work is marked by the careful brush strokes, right combination of colors and hues,  which he said reflected the subtle  character of Padre Pio.

Rebolledo said he wanted his painting to be healing, since “art is a confession… and confession heals… Padre Pio heals.”

In fact, Pope now St. John Paul II declared Padre Pio as a patron saint of confessors, owing to the Capuchin friar’s devotion to the sacrament of penance.

The official celebration of the feast of  Padre Pio  is Sept.  23. Thus Rebolledo said he would like to schedule his solo exhibitions  in September to coincide with the feast.

“Metanoia”  will formally open today (Sept. 2) at  Mira Art Gallery with a Holy Mass at 6  p.m. to be officiated by Fr. Orly Sapuay, SBD, and afterward, ribbon-cutting and cocktails. —CONTRIBUTED