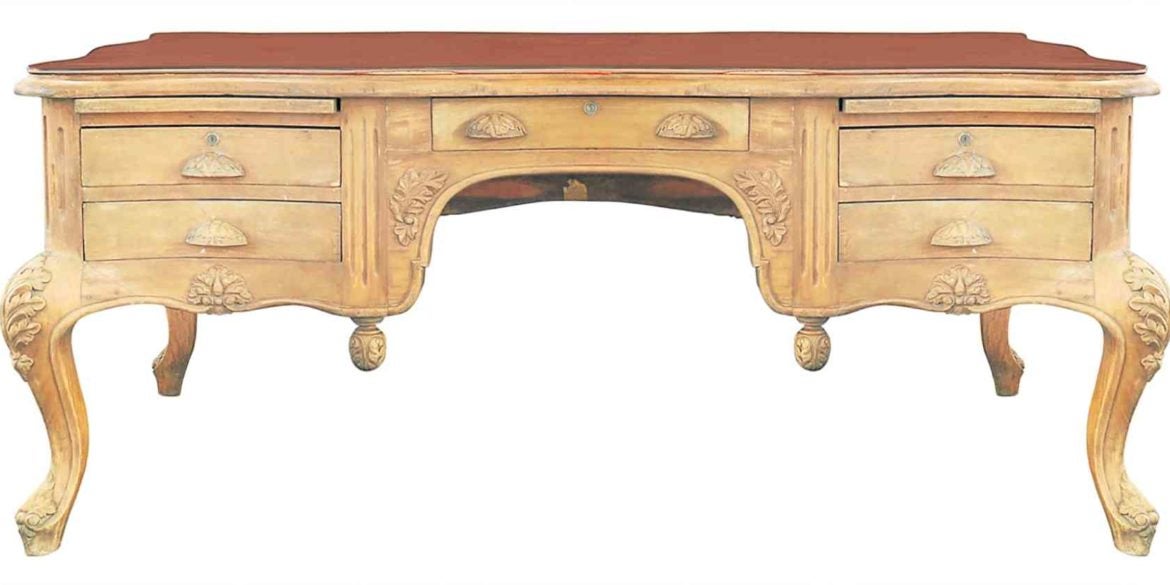 Magnificent presidential furniture during the administrations of Manuel Roxas and Elpidio Quirino are key highlights of León Gallery’s Magnificent September Auction on Sept. 14, according to auctioneer Jaime Ponce de León.

Furniture features a headboard, footboard and a half canopy embellished in the style of the Emperor Napoleon III and the Empress Eugenie at the Château de Saint-Cloud circa 1852-70.

“Ah Tay was the most successful Chinese-Filipino cabinetmaker from the second half of the 19th century to the first quarter of the 20th century (circa 1850-1925),” said Gonzalez. “He produced the most beautiful and the most expensive Victorian-style furniture for the elite families of Manila and the provinces. His client list was populated by the city’s richest and most influential families.”

Previously furniture by Ah Tay were sold after fierce bidding at León’s. “Ah Tay’s furniture for the rich was marked by the choice of excellent Philippine hardwoods, faultless scale and proportions, seamless Chinese-style joinery, and the lifelike, almost kinetic carvings of foliar and floral forms,” explained Gonzalez.

This large desk is an example of fine Filipino furniture work from the prewar era, when beautiful and mature woods such as narra, tindalo/balayong, and molave were still plentiful, available in large dimensions, and there was no lack of expert craftsmen.

León described it as an “enlarged version of an 18th-century French ‘bureau plat’… meant to be used by a person of consequence, with its large writing surface and five commodious drawers. In classical French style, it is embellished with acanthus leaves in key points. It stands on four cabriole legs with ‘pied-de-bouche’ feet.”

Another highlight of the forthcoming auction is the ivory image of “La Inmaculada Concepcion (The Immaculate Concepcion of Mary),” said Ponce de León. “This is a simply stunning Ivory statuette on a giltwood base, encased in an engraved glass cloche, the giltwood top cover surmounted by an outsized silvergilt crown with ‘gravado’ decorations,” he explained.

It dates from the late 18th to the early 19th centuries (circa 1775-1825) and is from the collection Antonio Bantug, who acquired it in turn from an old family of Laoag, Ilocos Norte.

“Long before the current trend of repatriation of similar Filipino treasures from Spain,” said antiques authority Gonzalez, “this precious statuette of ‘La Inmaculada Concepcion’ from the renowned Antonio Bantug Collection, along with an earlier, rococo-style statuette of ‘La Inmaculada Concepcion’ at the Museo Oriental in Valladolid, Spain, was considered by the generation of prewar art and antique collectors to be the highest point of Filipino ivory sculpture.”

Also in the spotlight is a campaign desk that once belonged to Don Enrique Barretto.
Barretto was one of Manila’s richest men in the 1890s. He was heir to a 200-year-old vast shipping and trading fortune that spanned from Shanghai to London. He was the founder of “La Fabrica de Cerveza de San Miguel.”

“Barretto was a very rich man of his time,” said Gonzalez. “He circulated in the grandest social circles dominated by the richest of the rich in Manila— Ynchausti, Roxas, de Ayala, Zobel, Tuason, Legarda, Paterno, Zamora, Palanca Tan-Quien-Sen, Chuidian, Velasco Chuachengco, Limjap, et al. Surely, there were some very private conversations between them that this desk witnessed.

Also to be auctioned off is Fernando Amorsolo’s “Portrait of a Maiden,” which Ponce de León described as “a riveting example of his artistry dating from the 1930s.”—CONTRIBUTED

The Magnificent September Auction on Sept. 14 will be held at León Gallery’s Eurovilla I saleroom, Legazpi Village, Makati City. Access catalog at www.leon-gallery.com.