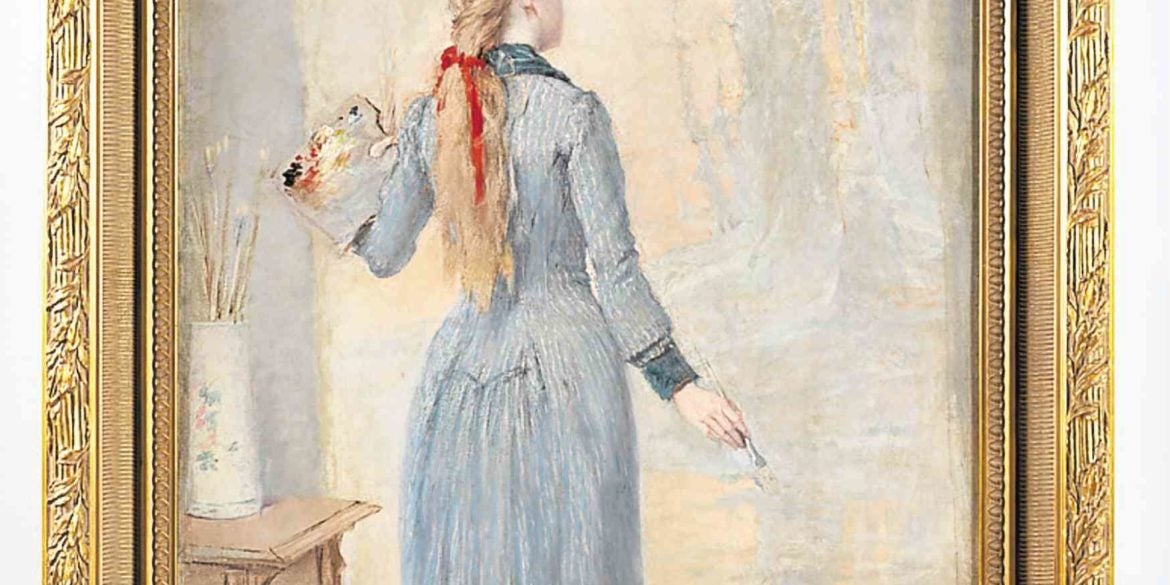 Even before the hammer dropped to announce the sale of Juan Luna’s “Spoliarium” boceto last year, keen observers and critics were already thinking, what could Salcedo Auctions have up its sleeve next?

But if one were observant, the answer shouldn’t have been a surprise at all.

Answer was hiding in plain sight all along—Felix Resurreccion Hidalgo’s “La Pintura”—a work that at one point was thought to have vanished. And yet when Salcedo Auctions made its surprising announcement a year ago, “La Pintura” could clearly be seen and was even acknowledged as having the same provenance as the alleged boceto.

The work depicts a woman in a blue dress holding a palette on her left hand, paintbrush on her right, perhaps taking the time to think about the magnitude of the work she’s about to undertake. Her back is to the audience but turned ever so slightly with nary any significant way of identifying her except for the red of her hair.

Every aspect of the work emanates mystery. It is signed “R. Hidalgo” and it appears in the same paragraph as Luna’s “el boceto de El Expoliarum, España y Filipinas” as being part of Sala de Filipinas.

At the time, the owner of both works by Luna and Hidalgo was reportedly quite attached to “La Pintura” and held on to it—until now.

The 19th-century oil-on-canvas is the main highlight of Salcedo Auctions’ “The Well Appointed Life” (Important Philippine Art Sale), set to take place at the Rigodon Ballroom of The Peninsula Manila on Sept. 21.

“I am so delighted that the owners have decided to bring ‘La Pintura’ to the Philippines, and that they have again given Salcedo Auctions the privilege to offer this very important artwork, allowing the Filipino public to appreciate and reclaim its cultural heritage,” Richie Lerma,Salcedo Auctions director, told Inquirer.

Auction catalog says “Estimate Upon Request,” but Lerma disclosed that Salcedo was looking to open the bidding at P18 million.

“I feel that for a large and exceptional work such as this, it is a very reasonable price to start,” Lerma said. “We, of course, already have clients who are making appointments to see the work in private ahead of the preview.

Where there is a Hidalgo, his contemporary Luna cannot be far behind as his “Venezia,” a rare 1881 watercolor, will also be up for auction.

The catalog calls it a “perfect example of the costumbrista style championed by 19th-century Spanish artists, including Juan Antonio and Jose Benlliure, both of whom became Luna’s good friends and travel companions around Italy, and whose panting styles in watercolor were also very similar to the Filipino artist’s.”

“The model, technique, style and detail are quintessential Luna pre-Spoliarium,” Lerma said. “The painting has impeccable provenance, having been acquired by the owner’s father from Federico Aguilar Alcuaz. It was gifted to the owner’s mother in 1974 to celebrate his (the current owner’s) birth.”

Also up for auction will be Ang Kiukok’s “Seated Figure,” an arresting subject even in its stationary form; Lao Lianben’s 2009 acrylic-on-canvas “Buddhist Television,” in which the artist uses shape and color to draw the viewer’s gaze from the center to the outer edges of the painting; and part of Maria Taniguchi’s brick paintings series.

There are other contemporary artists in the auction. “Elaine Navas, Rodel Tapaya, Ricky Ambagan and Ronson Culibrina make use of culturally loaded images to encourage the reexamination of personal and societal experience,” said Lerma. “Marina Cruz’s highly personal works marry the classical and abstract to capture the many intimate moments of what one can consider a “well-appointed life.”

Preview will be Sept. 13-20 at the Upper Lobby of the Peninsula Manila and at Salcedo’s display room at NEX Tower along Ayala Avenue. Online catalog is available at www.salcedoauctions.com. —CONTRIBUTED