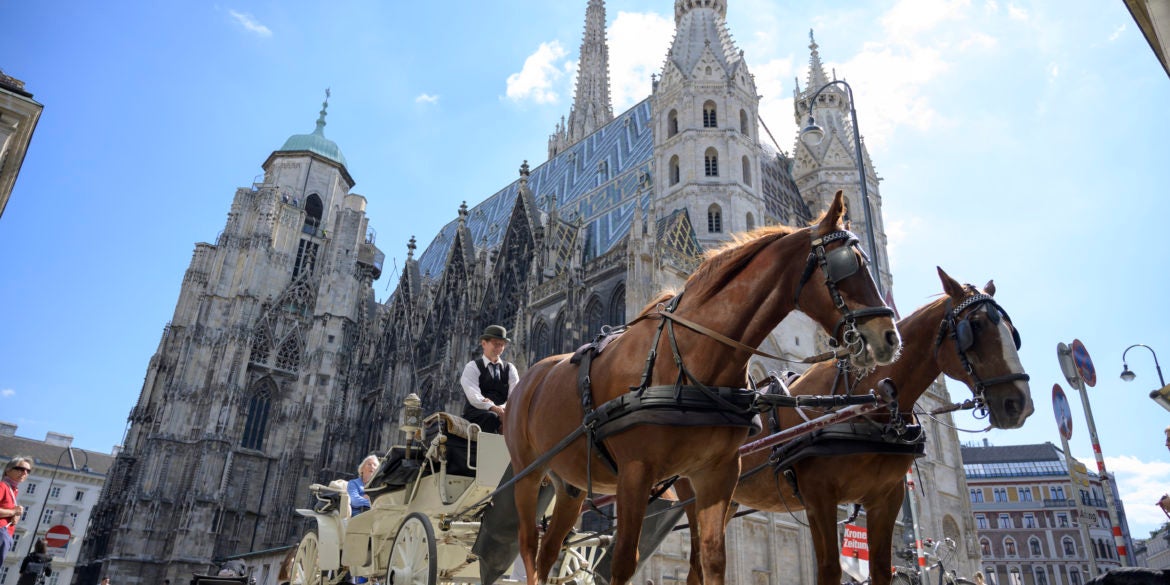 A carriage passes by the Saint Stephen's cathedral in Vienna Austria on September 03, 2019. - The Austrian capital Vienna has retained its ranking as the world's most liveable city, according to an annual report from the Economist. (Photo by JOE KLAMAR / AFP)

The Austrian capital is for the second year in a row basking in the title of the world’s most liveable city, as measured by the Economist Intelligence Unit’s annual ranking of the world’s urban centres.

Tourists may already be familiar with its Habsburg palaces and numerous opportunities for coffee and cake, but how else has Vienna kept its place at top?

Environment is an important factor in the EIU’s ranking and Vienna prides itself on its residents’ access to plentiful green spaces, with rolling woodland at the city limits easy accessible by its efficient public transport system. Even within its urban area, the city says that half of its surface is covered with some sort of greenery. Vienna can also boast that its drinking water comes direct from the Alps but if inhabitants need even more water to cool off in, a stretch of the Danube river is open for swimming in summer — reachable by metro, of course.

Many of Vienna’s municipal policies focus on keeping the cost of living in check and preventing patterns of inequality and gentrification that have affected other big cities. For example, annual travelcards for public transport cost just one euro per day and now outnumber cars in the city.

Housing is also an area where efforts have been made over decades to keep costs down, with around 60 percent of the city’s 1.8 million inhabitants living in a property where rents are capped. The cost of living overall is near the European average and the city’s crime rate is the lowest it has been for almost 20 years.

One resident Barbara Zburny told AFP that there were “no ghettos” in the city, adding: “Different cultures mix together well.”

One could be forgiven for thinking that given all this, the Viennese would be among the world’s cheeriest people and in the last satisfaction survey carried out by city authorities in June, nine out of ten did indeed say they were either “happy” or “very happy” to live in Vienna, with the city’s cultural life and environment scoring particularly highly.

However, the Viennese also have a reputation for “Schmaeh” or a sardonic sense of humour, and not always looking on the bright side of life. Indeed, tips for newcomers often include the essential skill of complaining like a local — or “raunzen” in the local dialect.

One survey of emigrants worldwide ranked Vienna 65th out of 72 cities in order of “friendliness”, with the language barrier cited as a particular problem in fitting in.

The left has won every democratic election in Vienna going back a century, with the city sometimes at odds politically with the more conservative rest of the country.

Every flattering international ranking is therefore useful ammunition for the city authorities, especially ahead of what’s expected to be a strong right-wing challenge in municipal elections in 2020.

The previous right-wing national government under Chancellor Sebastian Kurz was often accused of indulging in “Vienna-bashing”, particularly in respect of the city’s social expenditure.