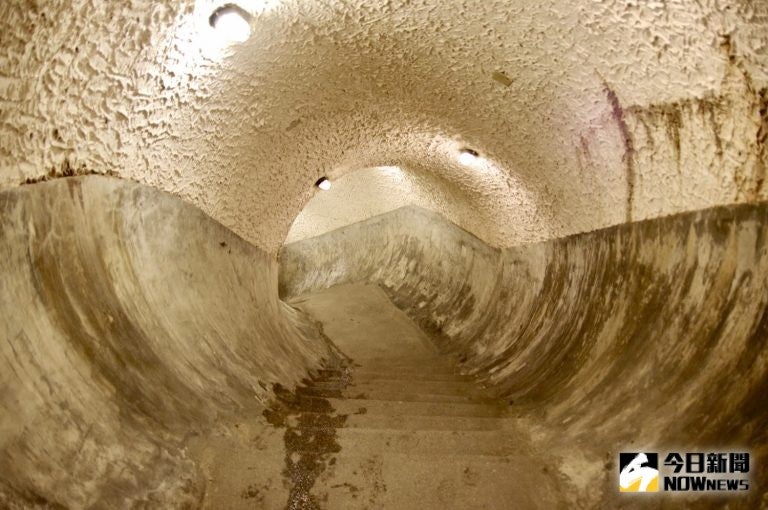 The Grand Hotel has opened up the 85-meter passage with 74-step stairs on the west side for visitors. (NOWnews) via The China Post

TAIPEI — Grand Hotel Taipei has opened its secret underground passage to the public.

Starting this September, with a limit of a maximum of 45 participants for each time slot, six time slots with guided tours per day are available for visitors. The guided tour has been fully booked immediately after the news was released.

This landmark hotel was established more than 60 years ago by Soong Mei-ling (蔣宋美齡), also known as Madame Chiang Kai-shek (蔣介石). Before it became a hotel, the building was used for hosting diplomats and envoys from other countries.

As an emergency precaution, two secret underground passages were built with one on the east and another on the west side of the building for fast evacuation. The eastern passage leads to 823 Artillery Battle Memorial Park (北安公園), and the western one leads to Jiantan Park (劍潭公園).

The Grand Hotel said that they’ve opened up the 85-meter passage on the west side for visitors. Besides the 74-step stairs, the underground tunnel was the world’s longest secret passage slide.

According to the Grand Hotel, the guided tour will cover for example the lobby’s decorated ceiling and interior decoration, also the centennial Golden Dragon, cultural gallery, the secret passage, and gift store.

The guided tour used to be opened only for guests staying in the hotel or special guests, and this is the first time it is made to be available for the public, the Grand Hotel said. Such has proved to be the right move since the guided tour’s popularity skyrocketed that it has brought in more customers for the hotel. Souvenirs, such as key chain in the design of ancient Chinese coin, and Grand Hotel’s signature bubble milk tea see increased sales on Sept. 1, the first day when the guided tour was opened.