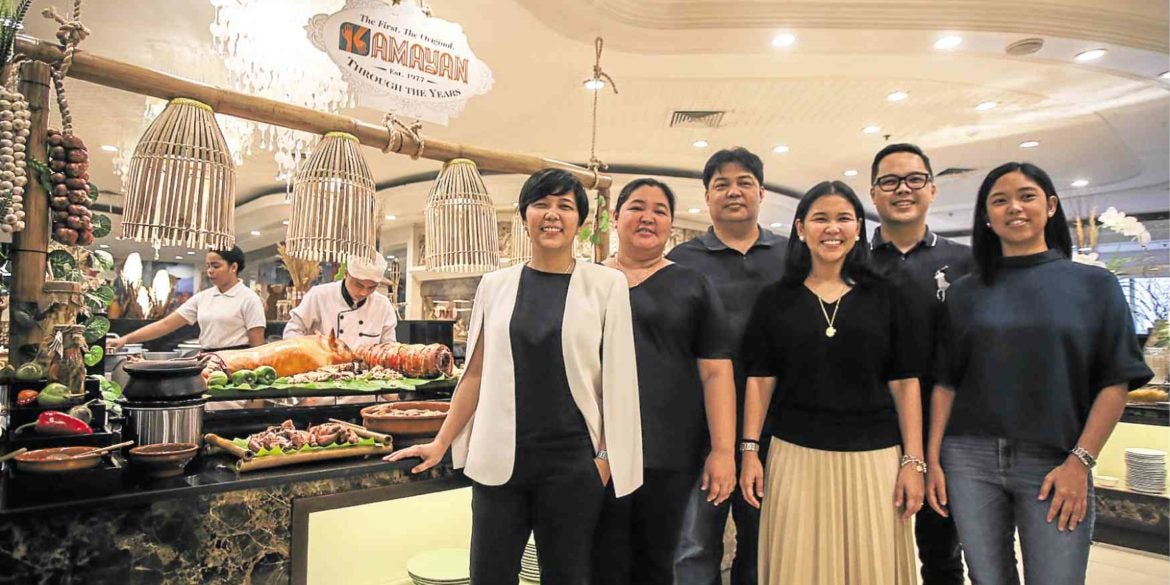 After blind ‘cumbancheros,’ banga, and eating with your bare hands, the 42-year-old pioneering resto still has more to offer

In 1977, the idea of opening a Filipino restaurant that encouraged you to eat with your hands seemed like a crazy idea. Yet 42 years later, that restaurant is not only still very much around, it continues to pack in the crowds (though eating with one’s hands is now optional).

Indeed, there’s no resisting the groundbreaking Kamayan, even when it’s one of three buffet stations of the always-bustling Dads World Buffet. (Dads specializes in continental fare; Saisaki, in Japanese cuisine.)

For P688, patrons can enjoy unlimited servings of delicious Pinoy favorites such as lechon (prepared Kamayan and Cebu style), kare-kare and crispy pata.

It has a slew of charbroiled dishes (from pork barbecue to chicken inasal and inihaw na baboy). Its kuhol (snail), cooked with coconut milk and chili pepper, is so popular that people have been known to come solely for it.

Kamayan also has its own version of pork sisig, which uses lechon de leche instead of parts of the pig. Its take on pancit palabok sees the noodles in fried lumpia wrapper and dipped in vinegar.

“We’d like to remind everyone of how good Filipino food is,” says Mara Villavicencio, managing director of Dads World Buffet. “It’s actually very rich and has a lot of different flavors. It’s an experience that is meant to be shared with family and friends.”

Family and friends, in fact, inspired the Kamayan dining concept. In the mid-’70s, Mara’s father, the late Vic Vic Villavicencio, and his cousins ran Villa Adelaida, a Tagaytay resort owned by their grandfather Jorge Vargas.

Amid the expansive view of Taal Lake, Vic Vic set up outdoor barbecues and grilled seafood bought fresh from Cavite. Watching patrons eat crabs and shrimps with their bare hands inspired him to incorporate it into his now-iconic restaurant, the first of several successful ventures (from the eat-all-you-can buffets Saisaki, Dads and Sambo Kojin, to the a la carte Ogetsu Hime, and the casual dining Number 1 Barbecues).

Born two years after the then a la carte Kamayan was established, Mara and her twin sister Cara Villavicencio-Espinosa have fond memories of the place that glamorized Filipino cuisine and culture at a time when Pinoys were developing a taste for American fast food.

Diners who visited the Kamayan branch on Pasay Road, Makati, were instantly transported to another place and time: Imagine being entertained by live music from blind cumbancheros in cozy interiors straight out of a provincial home. This included the banga, earthenware jars filled with water to wash their hands with before and after meals.

“I was very excited to eat with my hands,” she recalls.

Like her siblings, Mara worked in the restaurant during summers. A greeter, she opened the door for guests but because she was so small at the time, they couldn’t see her from the outside.

“I think my salary was P15 or P20 a day,” she says. “But when I would eat in the restaurant, my dad would say, ‘What you ordered is more expensive than your salary!’”

The kids also joined restaurant staff meetings, where they were briefed on how many guests were expected for the day. “It was from here that I learned the value of food,” she says.

These days, the managing director (and her siblings Veejay, Pia, Cara, Bokie, Victoria, and Vic) is committed to keeping Kamayan’s—and Vic Vic’s—legacy alive. For her part, she’s bringing back old favorites such as sizzling bulalo steak that she relished as a child. She also wants to travel around the Philippines to discover new dishes that could be added to Kamayan’s roster of choices.

“It’s different when you’re there and you can see how they prepare and eat it,” she says. “My dad’s family is from Bacolod and I didn’t know you eat chicken inasal with rock salt on the rice. My cousin taught me that and, surprisingly, it’s better!”

What won’t change, she assures, are the values her father had long impressed upon her and her brothers and sisters. “The passion for food and people; the rule that the guest comes first,” she says. “We want to continue that and make it last, not just for ourselves but for the next generations.”—CONTRIBUTED