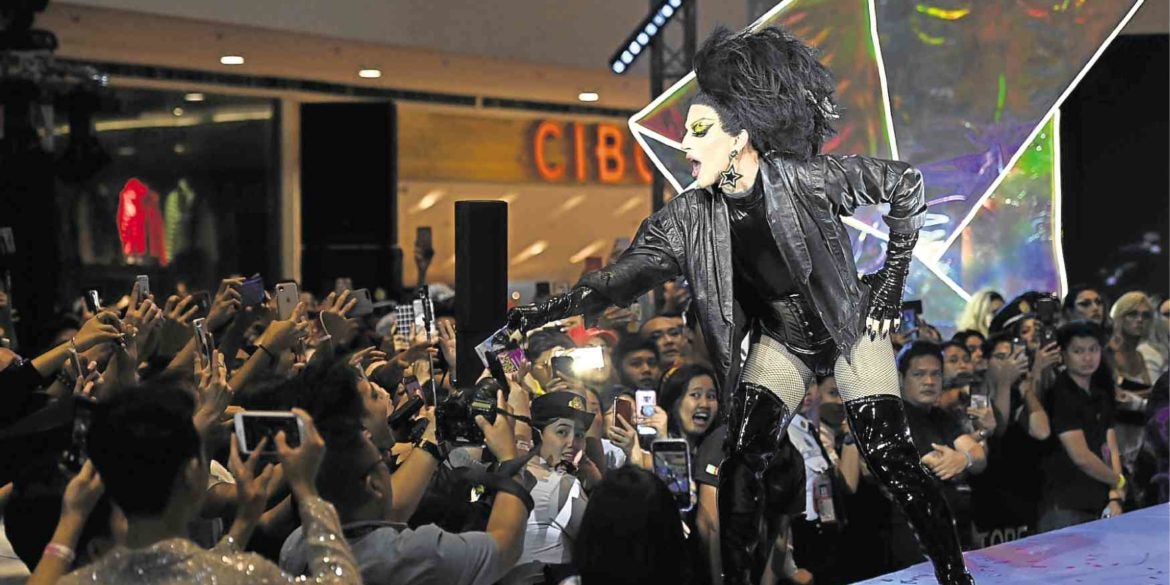 SM taps the ‘RuPaul’s Drag Race’ winner as ambassador—‘The SM Store is a safe space. Our tagline, ‘we’ve got it all for you,’ we do, no matter your gender, your nationality’

I want to look gorgeous for everyone in the Philippines,” said Aquaria, who looked stunning in a sleek black corset, yellow coat, fishnets and thigh high boots.

The 23-year-old New York-based drag queen, who made herstory in season 10 when she became the youngest winner of “RuPaul’s Drag Race,” was in the Philippines to promote her campaign with The SM Store. “To have the opportunity to be the face of the biggest chain of stores and malls in the country is crazy and intense. I know I have so many fans here so performing and meeting them is special. It feels incredible,” Aquaria said to Lifestyle before her meet-and-greet with fans at SM Megamall.

The SM Store’s Fiona Araneta praised Aquaria for her authenticity, youthfulness and fashion sense. “Aquaria was totally part of the process. Our shoot was collaborative. She picked those items. She’s a look queen.”

“We did plenty of looks. Everything was just easy,” Aquaria said of the campaign shoot. “It was nice to get to be, you know, a million different Aquarias in one day. Lots of different wigs. Lots of different outfits … I love the content that came out of it.”

Photos from the shoot can be seen at The SM Store branches all over the country.

Huge crowds gathered at Mega Fashion Hall at SM Megamall on Sept. 2 and The Block Atrium at SM North Edsa Sept. 3 for the #AquariaatSM shows, with many fans lining up as early as 6 a.m.

Aquaria lip-synched, interacted with the audience and shared the stage with fabulous local drag queens who won a contest The SM Store ran on social media.

“You are all super passionate. To see your creativity is out of this world,” said Aquaria. “I could not have wished for a better welcome.”

The SM Store’s Geo Custodio said, “Aside from everything the campaign could symbolize, it’s about the fashion. Aquaria is ‘stuntin’ looks.’ It just so happens that she’s also this really fierce drag queen.”

Since her ‘Drag Race’ win, Aquaria has been on a high-fashion journey, hitting the runway at New York Fashion Week, booking campaigns for Moschino and MAC Viva Glam, and walking the red carpet at the Met Gala.

“As drag queens, we always want to be taken seriously, even just in our own personal drag scene,” Aquaria said. “So for people like me and Violet Chachki, it was really cool to be included and to represent other drag queens and the LGBTQ+ folk of the world. We weren’t the coolest people in the room, but everyone in the room was the coolest person in the room. And it was like the weirdest group of people you could ever imagine. So, so crazy,” she said of her Met Gala experience.

Attending The Fashion Awards in the United Kingdom last December was another highlight for Aquaria. Vogue called her “the breakout red-carpet star” of the event.

“I wore this gorgeous gown by Matty Bovan. It was very crazy to be included in, you know, Vogue, who put my look at the BFA next to the Met Gala look of Rihanna. How are we in the same sentence? It’s crazy and surreal.”

Aquaria truly is a fashion queen—and fans love that about her. “My style is bold. It’s fearless. It’s fierce. It’s very referential. I love old fashion, new fashion, pop culture, things that haven’t even been invented yet. I just love being all over the place. And I think that I’ve created this drag persona that isn’t one specific thing. I get to wear things that are outside the box for me.”

But is there anything she wouldn’t wear? “I’ll never say no. I might not wear it today but maybe in a year, it might be the hottest new thing and maybe I will.”

Between her shows, Aquaria did some shopping at The SM Store in Makati. SM’s Mara Coson also presented Aquaria with bags from SM Shoes and Bags for her mom.

Aquaria said, “I hate that I’m only here for a short period of time but I’m enjoying this and I’m taking in every second of the people, the vibe, everything.”

Araneta said, “We want people to know that we are listening to what the customers want. Our message is that, The SM Store is a safe space. Our tagline, ‘we’ve got it all for you,’ we do, no matter your gender, your nationality. You can come here and you can find an accessory and whatever you want and feel safe coming into the store. That’s what we want people to know.

“Society is changing. Everyone evolves and The SM Store is also evolving.”

Aquaria is back in New York for “RuPaul’s DragCon” but Filipino fans will get to see her again when she returns to Manila in February for the “Werq the World Tour.”

“I’ve got my team of little Aquaria supporters here in Manila so I’m very excited,” Aquaria said. “It will be super fun for them. We’ve got North America coming up in a month or so. By the time we reach Asia, this show better be flawless.”