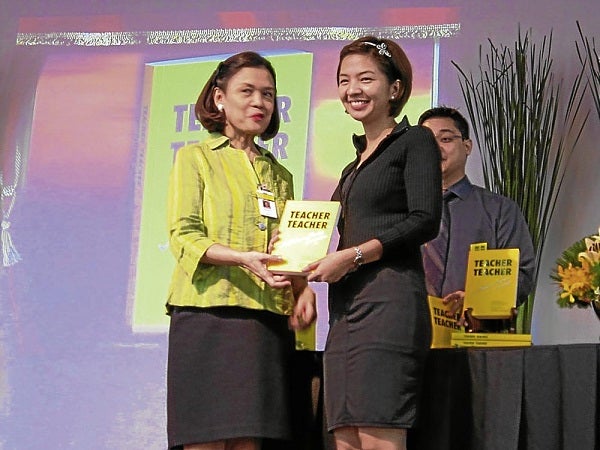 In the anthology “Teacher Teacher: A Tribute to Teachers Everywhere,” there are moments captured between teacher and student that seem like “a soap opera in dire need of revision,” in the words of communications consultant Cynthia J. Gruet. These moments enabled the mentors to touch the lives and futures of the contributing writers in ways unimaginable.

It is for this reason that Dr. Elizabeth Quirino Lahoz, Technological Institute of the Philippines (TIP) president, and the book team, led by editor Abe Florendo, put out a handy, readable, softbound pocketbook instead of a lavishly illustrated hardcover that would just gather dust.

Lahoz, whose school is celebrating its 50th year, read the manuscripts and found them “engaging, insightful, uplifting.”

Florendo says, “The book is a project of the Quirino-Lahoz family, the owners of TIP, not of the school’s. Beth, (her husband) Angel and their son Angelo wanted a book about teachers. They thought, what would be a more fitting celebration of the school’s golden anniversary than a tribute to that forgotten hero, the teacher?

“They wanted it small so it would be read by students and people who still hold a fondness for their teachers in their hearts. Of course, all of us do. The family did not want a coffee-table book documenting TIP’s history and forward vision. Everyone’s doing that.”

For Florendo, who owes his early writing fluency to his well-read father, a speaker of fractured French, and grade-school English teacher Miss Cacabelos, it was a dream project, especially when he was given the freedom to draw up a list of writers.

He continues, “I chose the ones who would give me no headache at all editing. Many were my colleagues in my newspaper and magazine days. We invited people who are tops in their work, career, vocation, of whom we would be interested to know who were the teachers who had influenced them most and how these teachers had shaped them into who they are today.”

The second and modestly thinner section of the book, gathered by Nieves Villamin, has tributes to TIP founder Demetrio Quirino Jr., an engineer, whose “grit and determination,” the anniversary theme, by the way, enabled the school to grow from a small rented space in a building to a two-campus institute (one on P. Casal and Arlegui streets in Manila and the other, on 2.8 hectares of land in Cubao, Quezon City).

His daughter Elizabeth tells how Quirino did not leave behind “a compendium of literature and scientific knowledge” because he was “the sidewalk version of an educator” who saw to it, and insisted that when it was her turn to run the school, students got “value for the hard-earned money of their parents.”

Serving as a touching coda to the book is Cynthia Ferrer Gubler’s “Their Special Place in Heaven” where St. Peter lets in a long procession of professionals, from a life-saving doctor to a diplomat who brokered peace. At the end of the line, as he is about to shut the pearly gates, is an old, unprepossessing woman who, when asked why she deserved to be in heaven, says, “Those people who entered ahead of me… they became who they were… because of me. I am their teacher.”

In his introduction, Florendo writes how at the start of the project he and the Lahoz couple could not limit the definition of teacher to “classroom teachers” because a great influence could also be “a parent, a priest, a tutor, a friend, a book, a line or two of a poem even, or, yes, a yaya.”

Buensalido, who has become her mom’s spitting image in looks and tone of voice, recalls how Mrs. Lumawig, a public school principal in Parañaque, “overprotected” and “over-motivated” her. Once called “tight guarding,” this form of discipline kept her upright among peers at the American School where 13-year-olds were already into makeup and dating.

Of the many mentors who crossed Dalisay’s path, unforgettable was Edilberto Tiempo. He told young Butch one summer at Silliman, after he had submitted a manuscript at a writers’ workshop and the older man learned he had dropped out of college and was churning out propaganda for a government office, “Save your soul. Go back to school.”

He followed the advice. This took him on a trajectory that began with his re-enrolling as a brash college sophomore at UP Diliman at age 27, alienating younger classmates because he studied the syllabus ahead of them and loved to recite with gusto, then onto graduate and post-graduate course work in the US.

Along the way, he encountered the “terrors” of the English department, the ones who’d be annoyed if a student said Greek gods got angry because they did more than that—“they became ‘enraged’ or ‘consumed with wrath.’”

Dalisay rues that the best thing his teachers taught him is “they made me want to be a teacher like them, holding forth with authority and passion on subjects they knew and loved. They did give me a choice—not just becoming an English or Engineering major, or becoming a teacher or not, but also being a good one or a bad one. I hope I made the right choice.”

Fenix’s literature and drama teacher Lourdes Loredo taught her how to pay attention to words and how to make sentences flow by reading aloud from magazine clippings. Later, the student learned that the examples shown to the class were Gilda Cordero Fernando’s “Tempest in a Teapot” columns.

The gruff, bushy-browed Armando J. Malay, hard-boiled newsman, journalism professor to generations of students and front-liner of the anti-Marcos Parliament of the Streets, inspired Garcellano for walking his talk.

She writes of his transformation from teacher to activist: “In his old age, Malay proved the Hegelian idea of ‘becomingness’—that ideas and people are never static… His years in academe did not make of him a discourse theorist who would deign to descend to the dust from his ivory tower; he was an organic intellectual who grappled with fundamental, troubling questions: ‘How does one speak the truth? What truth? For whom and where?’”

Llanes falls under the spell of Flora Mejia who chose to teach in a dead-end barrio in Dicamay, Isabela, where rampant logging and encounters between the New People’s Army and government soldiers were not uncommon.

She recalls how unfazed Mejia was when “NPA soldiers barged into our classroom and endeavored to teach us their chants and the primer of the ideology they were fighting for. Even today I can still sing the revolutionary songs the rebel soldiers taught us. As soon as the rebels left the classroom, Miss Mejia, unruffled, preternaturally composed, resumed our interrupted lesson.”

The other essays in the book are rich in humorous lessons, even moments of tears and actual physical pain as in Macuja-Elizalde’s case. Russian teacher Tatiana Udalenkova, who was never satisfied till her students could show more turned out legs and higher extensions, prodded her to her extreme best.

Florendo says, “As we are influenced by excellent teachers, so do we become teachers ourselves whether in the home, in church or in the workplace.”