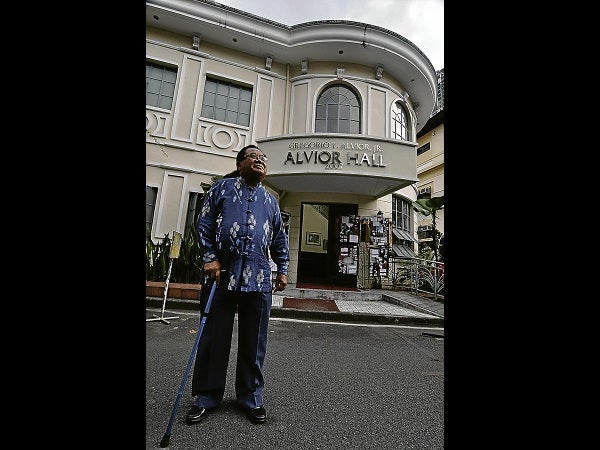 But it’s the biennial art auction that is the group’s biggest income-earner yet. Now on its fourth year, the art auction, which Alvior started in 2006, can net as much as P2 million. Good news, indeed, for a foundation that provides financial support to ensure quality medical care for 800,000 patients (90 percent of whom are indigent) admitted annually at  PGH.

Alvior, who got the idea of  art auction after watching one and seeing how the works got snapped up, attributes the event’s success to the  growing appreciation of the visual arts, plus the fact that “people get to take home something from the money they donate.”

But the beneficiary has much to do with it, as well. With the Charity Patients Fund as the recipient of the auction on Feb. 16, 3 p.m. at Manila Polo Club, Alvior tapped over 40 of the biggest names in local art to contribute works for a good cause.

“I had a feeling that because of PGH, it would be easy to convince them,” says Alvior, who asked the support of both the artists among his friends and the people he had just met. “Many were very willing.”

A graduate of the University of the Philippines Class 1962 and an obstetrician/gynecologist who had a lucrative practice in New York, Alvior dreamed of coming home to the Philippines and exploring a life after medicine.

“If you’re a practicing doctor, your life is just medicine,” he says when asked why he retired from such an illustrious career in 1995. “That’s one thing I think is unfortunate because there is so much else in life. If you limit yourself to one area, you’ll shortchange yourself.”

Still, when the offer to head the dormant PGH Medical Foundation Inc. was given him in 2003, Alvior was not exactly eager. “I was afraid it would destroy my retirement,” he recalls with a smile. But he also wanted a “useful” retirement, and when no one else it seemed could devote as much time as a retiree like him, he agreed.

For someone whose “experience” with charity work involved treating patients pro bono and sharing his knowledge with younger colleagues, Alvior proved a natural in his new and unexpected calling.

From near zero funds, the Foundation now not only has an office and staff, it has also  financed projects in the PGH compound on Taft Ave., Manila.

The Ortoll Primary Reproductive Health Center, a birthing place for normal delivery inaugurated in December 2011, is its most recent. The Foundation has also renovated the bathrooms of the outpatient department, and helps in the purchase of PGH linens, gauzes, needles  and sutures.

Yet, even with two annual charity events, written solicitations, and incessant follow-ups of potential donors, the Foundation struggles to cope with the hospital’s growing needs. “For every request we receive, we can do only half at the most,” says Alvior.

Surviving on the generosity of people also leaves him “wondering what the next year will bring.”

“I’m just doing what I think is the right thing to do,” says  Alvior of his motivation. “Our obligation as  human beings is to help do our share in making the world a better place. If you see something that is wrong, unjust and cruel, you can’t not do anything about it. Many people don’t want to get involved, but I think that’s a disservice. If there’s something you can do to help, no matter how small it is, do it!”

Searching for a successor

As in all his years in medicine, Alvior is aware that focusing too much on one thing “is not healthy. One cannot do it forever.” Training someone to succeed him is always on his mind. “Every day!” he exclaims with a hearty laugh.

Not that he’s ready to retire from this unsalaried profession just yet. Unfazed by rejection and so-called donor fatigue (“I hear it all the time, but I don’t believe it!” he insists), he lives for the occasional anonymous donor who drops by unannounced in his office to make a sizeable pledge, and the priceless feeling that makes his challenging job worthwhile.

“Most retirees tend to stay at home and depend on others to the point that they lose their self-worth. Something in them is diminished,” he reflects.

“But doing something that makes a difference, even if it isn’t recognized by everybody, buoys the spirit. It’s something you can appreciate even if you’re alone at night. I think that’s the reward,” he sums up his work with the Foundation.

“It’s not all giving. I’m getting something, too,” he says of his psychic reward.

Outside of the Foundation, the 74-year-old Alvior, who believes it is   his charity work that  keeps him sharp, has replaced daily games of tennis with swimming. (“Osteoarthritis on my knee,” he says, frowning.)

He also considers himself a weekend cook whose specialty is pasta. A man of simple pleasures, the doctor who dedicated 30 years of his life to medicine, now prefers to spend hours puttering around the garden.

For more information on the art auction “For the Love of PGH,” and other foundation activities, visit the Philippine General Hospital Medical Foundation, Inc. at the G/F, Nurses Home, PGH Compound, Taft Avenue, Ermita, Manila; or call tel. 5362874, 5674272 or 5548400 extension 3061.