Even her falling hair didn’t faze Sari; nothing did | Inquirer Lifestyle 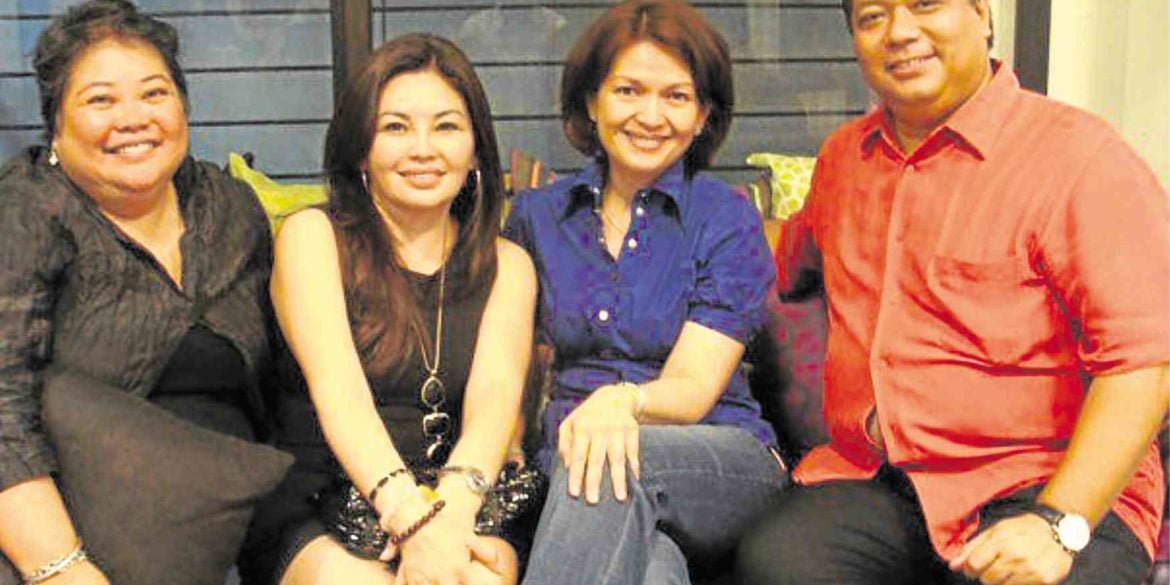 Sari Yap (second from left) with (from left) MinQuimson, the author and Arcus Fernando, in July 2009

Even her falling hair didn’t faze Sari; nothing did

She was listening to her body, but reminding it that she was still the decision-maker of her life

You know how it is when you know so much about a person’s amazing achievements and you have to choose only a few of the most wonderful? It’s similar to choosing memories from 54 years of friendship. So you start with the earliest.

Sari and I became friends in nursery school when we were 4 years old. She always reminded me that I was at her fifth birthday party, and she had photos to prove it.

We were classmates at Maryknoll Grade School from Grade 1 Section 1, to Grade 7 Section 1. Sari was the ballet dancer in our group. Even when she stood in line outside our classroom, she was poised.

I have images of her and Terri walking together along the grade school corridors and talking animatedly.

We would see their aqua Toyota Hi Ace doing the driveway loop after school. Tita Tessie and Cielo would fetch the necktied Sari, Gigi/Joji, Marvi and Ria. Their only brother, Lee Martin, was unique to us since he went to La Salle. All of our brothers went to Ateneo Grade School.

Sometime during grade school, Sari told us that she was on TV to join a kiddie contest hosted by Oscar Obligacion. It was an acting contest. She was told to laugh. Then to cry. When she cried, Obligacion said she sounded like the foghorn of a boat. To prove it to us, Sari mimicked a foghorn. Case closed.

By the time we were Grade 7, we were nearer Eileen Talusan, Leah Macatangay, Gret Navarro and Josie Acosta (with all due respect, and I say this in the most loving way).

Sari, Terri and I were also in the Ateneo Children’s Theater play in Grade 7. (Gina, Min and Didi decided to stick to their own schedules.)

On one occasion, we bumped into Sari and Kenn and I reminded them that they had been onstage spouses in grade school. They got a kick out of that!

Our group had many sleep-overs in Sari’s and my home. Once, when we slept over at Sari’s, she plucked our eyebrows. We went home the next day with perfectly shaped eyebrows, ready for first year high school.

At a sleepover in our home, we sang the entire score of “Joseph” by heart while walking around the subdivision. And Sari reenacted her role as Potiphar’s wife.

Another time, Sari asked our group to watch a martial arts movie starring Meng Fei and Elizabeth Oropesa. Just because.

Sari was ahead of her time health-wise, as well. She knew in grade school about low-carb diets. She would eat a hot dog on a stick for lunch. No bread. She liked pork barbecue, too.

But she would occasionally have a Cafetorium hot cake lightly dusted with sugar. And occasionally, a Maryknoll brownie.

In high school, Sari headed the Maryknoll Dance Troupe and was one of the floor cheerleaders who would do ballet splits at La Salle Green Hills’ St. Benilde’s Gym during Girls’ Athletic League volleyball games. Terri was a cheerleader in the stands. We were the supportive groupmates who cheered.

In college at UP Diliman, we remained groupmates. Sari, Min, Gina, Angeline and I belonged to a multicoursed group of mostly Maryknollers and Ateneans who called themselves Napagod Na Sa Kappa Pi Pi. (Terri and Didi went to Ateneo for college. My husband, Arcus, was also NPN KPP and a friend of Sari.)

Sari, being always organized and wanting to make the most of her time, simultaneously hung out with another group of La Sallites and Scholasticans, sold clothes from the trunk of her car, and still managed to ace Broad Comm!

In between, she avoided all advances of unwanted suitors and was an active member of Opus Dei. Again, some of us would visit her at Mayana Center or wherever she was based, and would even attend retreats of the Work.

Sari took her masters in Navarre (in northern Spain).

She came home and built Mega, block by block. At the start, she used her mom’s car for deliveries of Mega magazine.

Before we knew it, she had expanded the business to more magazine titles for different markets—Mega, Me, Meg, Mega Men, etc.

She was a great storyteller. When she was into crystals, she would have clearing sessions in our home and identify the angels who were part of our lives.

According to Sari, my angels included Michael, Gabriel, Rafael and someone I am sure I wrongly remember as Megatron. (Sorry, Sari. You’re not here to remind me of his name.)

We kept in touch even when we were building our respective careers. We’d talk about her magazines, TV shows, projects. Even when she was not feeling so great, she was still planning.

We would talk about the legal and humane aspects of her business and her life. She knew I kept many folks’ secrets and she was happy about that.

She was happy when I was made the first female partner in my name-brand law firm —an abogada de campanilla, the good version, she said. She always said she couldn’t afford me but that was just her being sweet. We continued to discuss her life and business anyway.

I was with her the day her hair first started falling. We were just hanging out in her flat and talking. She said she was glad I was there when it happened. But it didn’t faze her. Nothing did. She was listening to her body but reminding it that she was still the decision-maker of her life.

There are so many memories. Many happy. Many not so happy. I choose to remember the former. I hope you choose the same, as well.

The author delivered this eulogy Sept. 11 at the funeral services for Sari Yap.