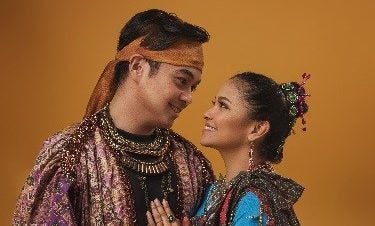 Rep’s ‘Adarna’: A first in many ways

Written for its Theater for Young Audiences program, the original musical has a minimalist set and Maranaw-theme costumes

“The Quest for the Adarna” is a first in many ways for Repertory Philippines (Rep) Theater for Young Audiences.

The story, adapted for the stage by Luna Griño-Inocian, with music by Rony Fortich, is based on a well-loved Filipino legend—totally different from Rep’s productions of world classics from the Brothers Grimm or Hans Christian Andersen.

The minimalist Asian set by Joey Mendoza and Maranaw-theme costumes by Tata Tuviera replace the grand palaces and other lavish settings.

The bad guys still conspire to kill the hero, in this case, their youngest brother. And, yes, the scene where the hero, Prince Juan, makes small but painful cuts on his arm is retained—rumors to the contrary notwithstanding. After all, it is the only way he can keep awake the whole night, capture the magical bird and heal his dying father, the king.

In Rep tradition, the musical is in English and intended for preschool and elementary students to ponder on its lessons and insights.

Jamie Wilson, who codirects with Naths Everett, says the material’s more mature themes are replete with Filipino family values: “Respect for elders, taking care of your family, kindness and forgiveness. Instead of deliberate villains, we have characters who lose their way and make mistakes out of insecurity, greed, entitlement, or ignorance. But they also find redemption through the help of the magic of the Adarna.”

Those strong family ties also help, says Griño-Inocian, “The three princes may be competitive, but they do have a bond.”

Griño-Inocian believes that the 21st-century Filipino child is smart enough to appreciate the bit of character layering that deepens what were once treated as black-and-white stereotypes.

The hero’s love interest is no longer just a pretty trophy princess waiting to be saved, but “a hero in her own right. She has been trained to be a soldier, according to the parameters of that time,” says Griño-Inocian.

“Prince Juan and Princess Maria Blanca also have a compatibility that leads into a playful banter,” she adds.

A comedic touch serves as counterpoint to the serious theme.

Several dance numbers choreographed by PJ Rebullida are aimed to fill the huge set and keep the action going.

The creative team led by Joy Virata is still mum as to how the mystical Adarna (alternately played by Carla Guevara-Laforteza, Shiela Valderrama-Martinez, Andrea Monique Alvarado, Cara Barredo) will make her appearance in this play. Word has it that one of the first scenes will have her “soar.”

How high this “Adarna” will fly as a play may help determine if Rep will do more original children’s theater in the future. —CONTRIBUTED

Repertory Philippines Theater for Young Audiences’ “The Quest for the Adarna” runs until Jan. 12, 2020, at OnStage Theater, Greenbelt 1, Makati; ticketworld.com.ph.