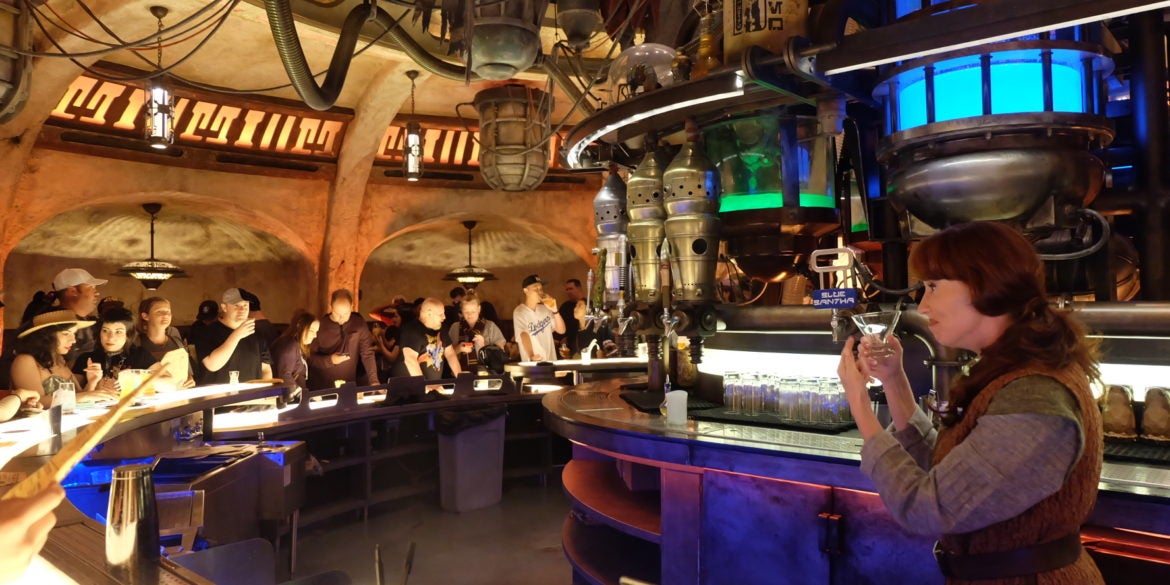 Carrie (right), one of our favorite bartenders at Oga’s Cantina

“There’s a rebel over here!” a woman shouted.

Two Stormtroopers approached quickly. “We’ll handle this,” one of them said.

“Let me see your identification,” he commanded.

Another Stormtrooper approached a man. “Have you pledged your allegiance to the First Order?”

“Excellent. We expect that to continue,” the Stormtrooper said, posing for photos.

Welcome to Galaxy’s Edge, Disneyland’s $1-billion, 14-acre Star Wars-themed land, where guests get to explore Black Spire Outpost on the planet Batuu and where run-ins with Stormtroopers are a daily occurence. “This new land has set the bar for immersive experiences,” said Bob Chapek, chairman of Parks, Experiences and Products for Disney.

“Galaxy’s Edge has its own life. It beckons for you to explore all those nooks and crannies,” said Walt Disney Imagineering’s Kirstin Makela.

In building Galaxy’s Edge, Bob Iger, chair and CEO of The Walt Disney Company, gave the Disney Imagineers the challenge of “being the most ambitious they’ve ever been.” They didn’t disappoint.

“Hundreds and thousands of artists and technicians from Imagineers and outside partners gave 110 percent to all the amazing details,” said Kirstin, who said they worked like anthropologists on Black Spire Outpost, showing how “layers of life accumulated over time.”

Walking into Galaxy’s Edge is like walking into a Star Wars movie. You forget you’re in Disneyland, or on Earth. You’re in a galaxy far, far away. It’s a dream come true for Star Wars fans.

We first visited Galaxy’s Edge at dawn, before the park opened and the crowd came. Because the crowds have been coming. Since Galaxy’s Edge first opened in Disneyland last May 31 and Disney’s Hollywood Studios at Walt Disney World in Florida on Aug. 29, fans have arrived in droves to live their own Star Wars stories on Batuu.

“I can’t believe I’m standing where I’m standing,” said one of Galaxy’s Edge’s first guests in a video that, we will admit, made us cry.

“The guest reaction has been incredible,” said Bob Chapek. “We’ve seen tears of joy from fans who waited their entire lives to be part of the Star Wars universe. Those reactions and the memories that they inspire are why we do what we do.”

Time Magazine named Galaxy’s Edge one of the World’s Best Places for 2019.

A figure stood in the distance, waiting to welcome us. We squealed in excitement. It was Chewbacca, all seven-and-a-half feet of him. As Chewie spoke Shyriiwook and gave everyone big hugs, we talked to Abby, a Batuuan who says she hangs out with Chewbacca so much that she’s become almost fluent in Wookiespeak. She demonstrated her skills, trilling and growling. “That means mahal kita. Chewbacca and I are really close kaibigan.” The cast members at Galaxy’s Edge really stay in character.

“Excuse me, where’s the Millennium Falcon?” I asked one of them.

I didn’t just want to see it—I wanted to ride it.

Nothing will prepare you for the first time you see the Millennium Falcon in all its glory. That’s how incredible the sight is. “This is the first time we built a Falcon to scale and in 360. When you see it in movies, it’s only parts,” said Kirstin.

“Welcome aboard the Millennium Falcon, my friends,” said Jarvo who was handing out roles for Smugglers Run, the mission Hondo Ohnaka had recruited us for. We looked at the card in our hands. Gunner, it said.

Our jaws dropped as we walked into the cockpit. “So cool,” we whispered. We strapped on our seatbelts and soon, we were flying. We mashed buttons as we hurtled through space, hoping we were hitting our targets.

“That was a good run. You made Chewie proud,” a guy said as we got out, still dazed from the exhilarating ride.

An even more exhilarating ride is coming to Galaxy’s Edge on Dec. 5, 2019, at Walt Disney World and Jan. 19, 2020, at Disneyland. Star Wars: Rise of the Resistance will sweep guests into an intergalactic battle between good and evil. “It’s unlike anything you’ve ever experienced,” said Kirstin.

We explored the marketplace, watching a loth-cat snooze peacefully in his cage at the Creature Stall, resisting the urge to buy all the handcrafted toys at Toydarian Toymaker, admiring the clothes at Black Spire Outfitters and picking up a bag of popcorn at Kat Saka’s Kettle—a strange but tasty mix of blueberry lemon pound cake and red chili lime. (You can get your popcorn in an MSE-S series repair droid vessel too.) We dropped by Ronto Roasters, where the droid 8D-J8 was roasting meat using a podracer engine. As we scarfed down our Ronto Morning Wrap, we saw the Resistance spy Vi Moradi.

“Tell me which one you like better,” said Katherine who works at the stand. She describes green milk as “floral citrusy” and blue milk as “tropical berry.” “We make the blue milk in Batuu but the Banthas are actually from Tattooine. They’re a great grazing animal.”

Lactose intolerant? Don’t worry—the refreshing drinks are actually made of a mix of coconut and rice milk.

“May the spires keep you,” Katherine said as we left. It’s the Batuuan way of saying goodbye.

People walked around with Kowakian monkey-lizards sitting on their shoulders and hydration orbs in their hands (they’re actually soda in thermal detonators—the result of a brilliant partnership between Disney and Coca-Cola). We spotted an annoyed Kylo Ren scolding Stormtroopers. “You said this man is a threat. You are toy soldiers!”

Kylo Ren approached a little girl dressed as Princess Leia. She was holding a plush Chewbacca. “There are two sides to the Force. Choose carefully,” he said as she grabbed her father’s hand.

Dok-Andar’s Den of Antiquities is a trove of Jedi and Sith treasures. Everything within reach—kyber crystals, figurines, holocrons and more—is for sale. But eagle-eyed fans can also look around his private collection to spot weapons, creature heads and other artifacts previously seen in Star Wars films, comics and video games.

At the Droid Depot, people can build their own R-series or the BB-series droids for $99.99 (or 99.99 credits—that’s the currency in Batuu), picking parts from a conveyor belt and putting them together at the build stations. Droids are brought to life before your eyes, said David, who works at the Depot. And they react to their surroundings as you take them around. “Based on how you affiliate, if you are Resistance-leaning, First Order-leaning or if you’re a scoundrel, there are different chips that you can place inside your droid that could give it that type of personality,” David said.

We met Kris, another Batuuan. “If you don’t mind, I’d like to go inside to finish the conversation,” he said, leading us inside Savi’s Workshop. The reason for secrecy: Savi’s is where people go to build their own lightsabers with the help of Gatherers. It is a moment that has been described by some fans as a religious experience.

“We don’t like to throw around the word lightsaber too liberally in the Outpost, it can get us into trouble. We don’t want the First Order shutting us down.”

We asked Kris: How much does a custom lightsaber cost? “Two hundred credits plus applicable taxes to Oga because she wants her cut and the last thing we want to do is upset her.”

We had been hearing a lot about the feared Oga Garra. And we were about to enter her turf—Oga’s Cantina. “Oga’s taken over almost everything in the Black Spire Outpost. She’s our crime mafia boss. But you’ve got to love her, an independent woman taking charge,” said Kate who was waiting for us at the Cantina.

There is so much to appreciate at Galaxy’s Edge, whether you’re a hardcore Star Wars fan or you can’t tell an Ewok from a Wookie.

Those who want to add another layer to their experience can download the Disney Play app onto their datapads (phones for us non-Batuuans). With it, you can hack into droids and devices, scan crate walls and doors, translate the Aurebesh signs and align yourself with the First Order or the Resistance.

One visit to Galaxy’s Edge isn’t enough to take everything in. We returned the next night, walking past the Runaway Mine Cars of Frontierland to once again be transported to Batuu. The mission? To get into Oga’s Cantina. It wouldn’t be easy as the place is always fully-booked and there’s constantly a line outside. (They do release slots on the Disneyland website and app at 7 each morning but we didn’t get lucky.)

We were next in line when Chewbacca walked inside the Cantina. “He’s never done that before,” we were told.

“Hey, have you tried the Ewok cookies?” one of the Cantina bouncers asked us.

“What?” we asked, confused.

“I hear they’re Chewie,” she said with a grin.

By the time we made it inside, Chewie had left. We bobbed our heads to the catchy sounds of the droid DJ R-3X (he had dropped his EP on Spotify that day), Carrie tossed coasters at us like they were frisbees and another bartender regaled us with tales of celebrities who had visited the Cantina that weekend. Christina Aguilera. Jon Favreau. Daisy Ridley. Josh Gad.

“Adrian, what are those?” we asked, pointing to a pile of discs behind the bar.

“Cookies,” he said, placing two in front of us.

We ate them on our walk out of Disneyland.

The next night, after watching the fireworks, we were back at Oga’s again. “Reservations only,” we were told.

“We’re still going to try,” we replied, refusing to leave. We have never worked this hard to get into a bar. But we have never known a bar as cool as Oga’s Cantina.

Galactic travelers walked by, asking if we had reservations. “No,” we replied. “We’re just scoundrels.”

But these scoundrels made it in again. “Weren’t you here yesterday?” one of the bartenders asked us.

When the bar was closing, Dennis announced, “You don’t have to go off-planet but you can’t stay here.”

As we struggled to down our White Wampa Ale before they kicked us out, a surly bartender said, “I’m sure they value slow drinkers where you’re from.”