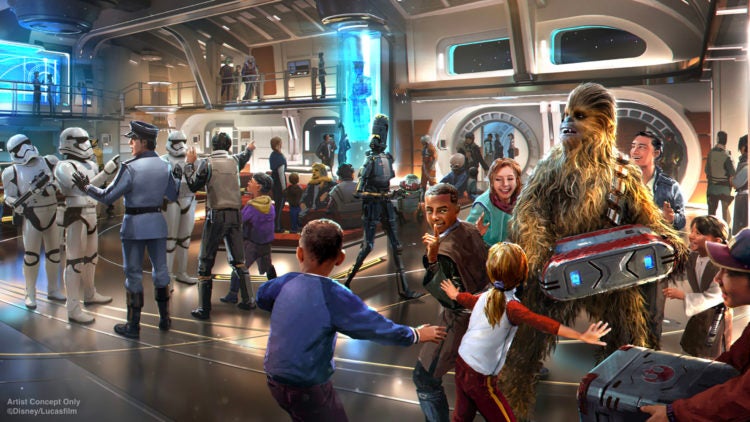 What’s next for Star Wars fans

‘Rise of Skywalker,’ Star Wars: Galactic Starcruiser and other reasons to get excited

“I think the strongest thing about Star Wars is the idea of the Force and the fact that the Force is everywhere and the heart of everything. This is something people connect with,” said LucasFilm President Kathleen Kennedy.

And Star Wars fans will get to experience the Force in a multitude of ways, with the many things Disney and LucasFilm has planned for them.

“The Mandalorian” will begin streaming when Disney+ launches on Nov. 12. There’s also a new season of “Star Wars: The Clone Wars” coming out in February 2020, “Rogue One: A Star Wars Story” starring Diego Luna and Alan Tudyk and Ewan McGregor’s return as Obi-Wan Kenobi, all headed to Disney+.

“Star Wars: The Rise of Skywalker” will hit cinemas in December. Director/writer/producer J.J. Abrams was at the D23 Expo with cast members Daisy Ridley, John Boyega, Oscar Isaac, Anthony Daniels, Naomi Ackie, Keri Russell, Joonas Suotamo, Kelly Marie Tran and Billy Dee Williams to talk about the highly anticipated conclusion to the Skywalker saga. R2-D2, BB-8 and the new droid D-O showed up too. “It’s kind of hard for me to understand that the story is ending. But what an ending,” said J.J. “I cannot wait for you to share what we have all been doing for the last many, many months.”

Carrie Fisher, who died in 2016, will be in the film as Princess Leia. “We realized we could not possibly tell the end of these nine films without Leia,” he said.

They will be using footage of Carrie from Episode VII. J.J. said, “We can’t wait for you to see her in her final performance as Leia.”

Fans are already flocking to Walt Disney World Resort for the newly opened Galaxy’s Edge (the first one opened in Disneyland earlier this year) but they will soon have another reason to go—Star Wars: Galactic Starcruiser.

At the D23 Expo, Disney unveiled the galactic voyager Halcyon, which, according to Bob Chapek, Disney’s chair of Parks, Experiences and Products, “will take you on a two-night Star Wars experience like none other.” He described Star Wars: Galactic Starcruiser as “perhaps the most immersive experience we’ve ever imagined” and said that it “will immerse you and your fellow travelers in that galaxy far, far away.”

“What do you think? Should we go to space?” teased Ann Morrow Johnson, executive producer and creative director at Walt Disney Imagineering, as the crowd at Hall D23 cheered.

A launch pod will take you to the Halcyon, said Ann. “Be wary of who you make allegiances with because the choices you make affect the course of your journey and ultimately determines how your Star Wars story unfolds. It’s an opportunity to live your multiday story as it unfolds and interweaves with the crew, other passengers and those Star Wars characters.”

Aboard the Halcyon, “kids and adults can face off against a training remote while wielding a lightsaber, just like what we saw Luke Skywalker do,” said Ann.

The two-night adventure also includes a spaceport day on Batuu.