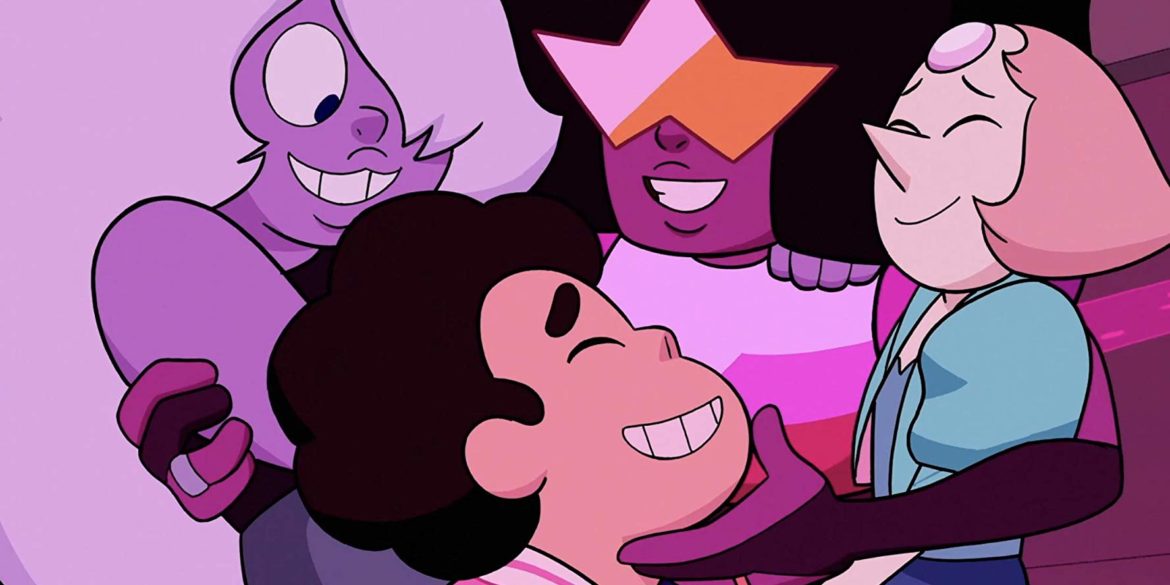 Steven is now 16! And his bond with the Crystal Gems is stronger than ever.

Steven Universe gets the sweet, emotional, musical sendoff it deserves

Cartoon Network’s “Steven Universe” already had a series finale at the beginning of this year. It was cathartic, moving, epic, exciting… a very satisfying finale, so satisfying it left some people wondering what was left for the already announced Steven Universe movie to do.

Well. After 161 episodes over five seasons, “Steven Universe: The Movie” is the final piece of new material we can expect, and even from the beginning, Things Have Happened. First, it’s set two whole years after the events of “Change Your Mind,” with Steven now a 16-year-old.

Second, it seems that Steven has achieved a kind of galactic peace, having spent those two years we haven’t seen him going around to different planets colonized by Homeworld of the Crystal Gems and making things right. He’s returning to Earth, though giving the OG diamonds Yellow, Blue and White some serious separation anxiety.

Back on Earth, he joins his family and friends and they relive in song their individual journeys over the course of the series, and when they conclude and lie down and relax about everything finally being alright, naturally that’s when things go awry. A new gem arrives with a freaky-looking ship. Her name’s Spinel and her ship starts injecting a poison into the Earth. Worse, she handily dispatches the gems with a scythe-like weapon, and she somehow knew Steven’s mother, Rose Quartz.

This allows an opportunity for the supporting characters to get some time in the spotlight. Lapis, Peridot and Bismuth, who at different points in the series were all antagonists, do their best to help Steven figure out what to do, but Steven himself has to accompany Spinel on a journey to solve the mystery of who she is, what her beef is, and how he can rescue the Gems, who have basically been reset to their factory settings.

Though somewhat of a victory lap, “Steven Universe: The Movie” is also a distillation of what the series did so well, focusing on empathy, compassion and trying to deal with emotional issues by addressing them head on, even if they are sometimes painful. Some of the weightier issues tackled here are abandonment issues, repressed traumatic memories, the therapeutic power of music and continuing to pay for the sins of your parents. Though it looks light and the colors are bright and pretty, and the characters look cute, Steven Universe has always had a lot bubbling underneath.

It’s also very much a musical, with a lot of songs that include collaborations with Ted Leo, Aimee Mann, cast member Estelle, and Chance the Rapper. Songs have always been used in Steven Universe, and here they continue to expand upon the drama of the characters’ situation as they voice in song what they sometimes are unable to with mere words.

There’s some surprises in store for longtime fans, as well, especially a fusion we’ve never seen before, and an entire chapter of Rose Quartz’s life we didn’t know about. The excellent voice cast continues their superb work, with Zach Callison even dropping his voice a notch to really denote how Steven has grown since season one.

While perhaps not as epic as the series finale, “Steven Universe: The Movie” still delivers an emotional payload that is the surprise signature of the series that began as an homage to video games, animé, and musicals, and evolved into so much more.