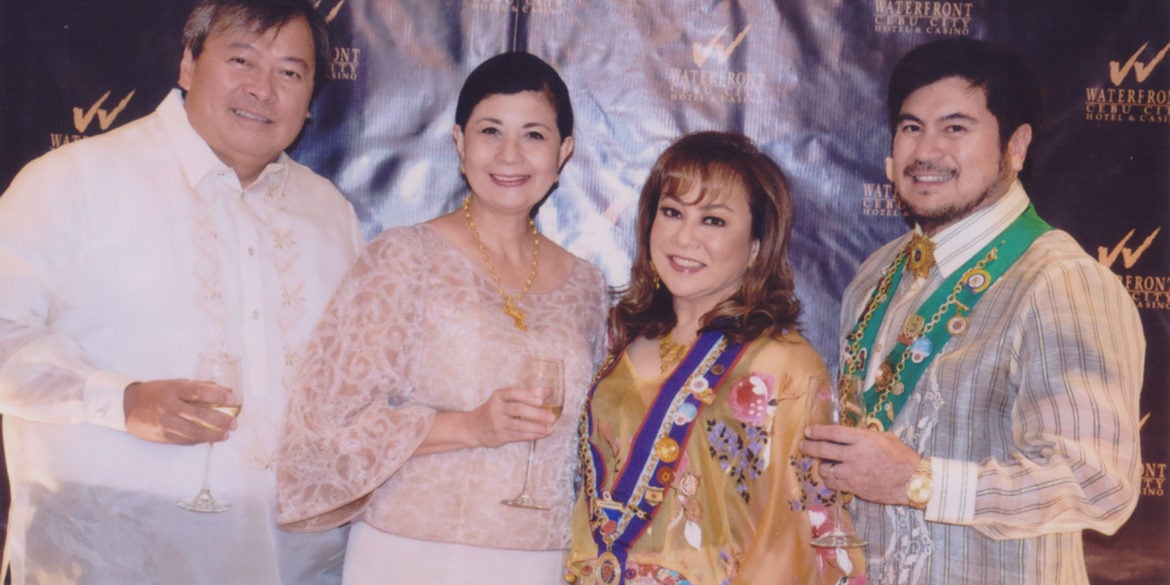 Marco and Mariles Nable with Federico and Josephine Borromeo

An evening of elegance and ‘Chocolate Excellence’

Decadence is a word to be used with caution. Its true meaning has to do with decay, decline, and/or a deteriorating condition. We are warned that where there is inordinate splendor, decadence may be right behind or right beside.

The latest night of elegance and splendor for the Cebu chapter of La Chaine des Rotisseurs had “Chocolate Decadence” for its theme. Michel Lhuillier, bailli délégué for La Chaine in the Philippines, gave his full approval at the food tasting night, and agreed with someone who said that theme could well be “Chocolate Excellence.”

It had to be so, what with Cebu’s “Chocolate Queen” Raquel Choa involved in every course of the splendid menu, brought forth by an overwhelming Anders Halden, general manager of the Waterfront Cebu City Hotel and Casino.

It was a fellowship night but the turnout had over a hundred guests dressed in Filipiniana Moderne, filling up the grand ballroom. The huge hall was entirely draped in black, with flaming red curtains, from ceiling to floor. Myriad crystal chandeliers sparkled over a circular stage where a full show of songs and dances entertained the guests throughout.

Tables had centerpieces that featured the actual cacao fruit from where chocolate is derived, and on every service plate there was a green and white cattleya orchid. Predinner cocktails were held at the foyer.

Lhuillier was on the red carpet, the very picture of boundless happiness. Among the first to arrive were bailli de Manille Ferderico Borromeo and his wife Josephine, with their Cebu cousins Marco and Mariles (nee Alvarez) Nable.

Not far was Hans Eulenhoefer with the stunning Joanne Borromeo. Hans now heads L’Ordre Mondial des Gourmets at Degustateurs in Cebu. Dr. Nestor Alonso, also in the board of directors, was annotating what would come next in the evening’s program.

How did chocolate go into the elaborate menu of the evening?

To start there was New Zealand lamb carpaccio with tablea dressing. The soup had porcini mushroom and chestnut with a slight hint of bittersweet chocolate. Then came the pasta—a large single ravioli with chocolate streaks.

The sorbet was snow chocolate and lemon, followed by the fish dish: cod fillet with a red onion and ginger chocolate marmalade. The main dish was New York prime strip loin crusted with chocolate.

If you wanted more, there was a long buffet groaning with chocolate delights, served by Raquel Choa and her pretty daughter Hannah. Yes, it was quite an evening, and the surprise was that one did not feel heavy. And if one felt like it, there was dance music to make the evening last longer than usual.

Michel and Amparito, surrounded by a group of lovelies, were at the center of it all.