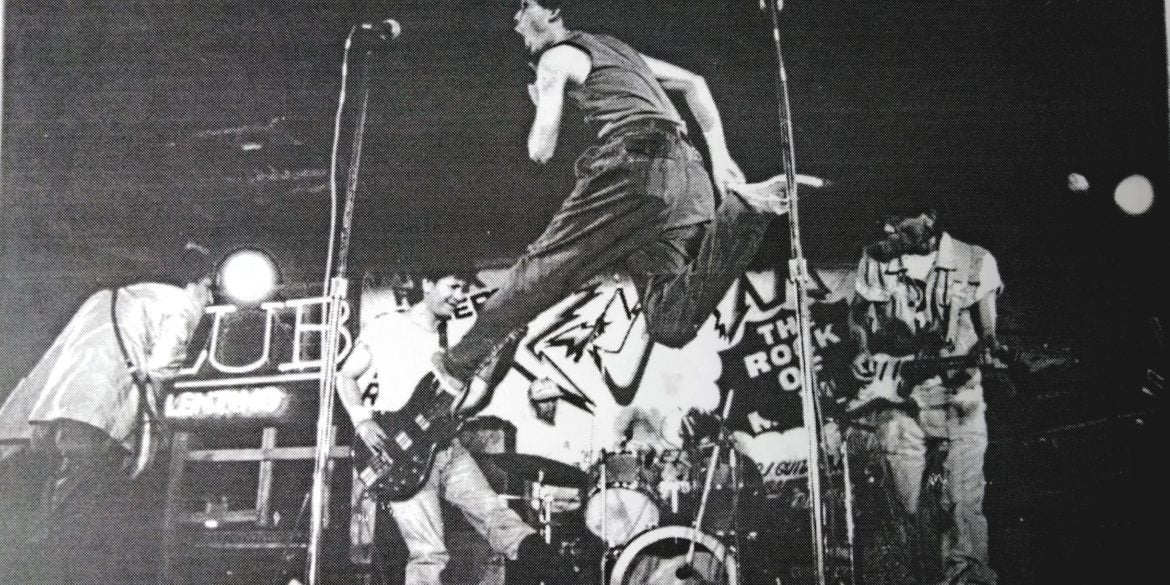 A group of deans and professors from the University of the Philippines have organized ‘Shine for Chickoy,’ a fundraising-cum-tribute concert Sept. 27

The hardest-working band in Pinoy rock ‘n’ roll? Hands down, The Jerks.

And come October when it celebrates its 40th anniversary, The Jerks will be the longest continuously performing rock band in the land.

“I have mixed emotions about that,” confesses Alfredo “Chickoy” Pura Jr., Jerks frontman and only remaining original member since guitarist Nitoy Adriano left the band eight years ago.

“Sometimes I think we might be obsolete. But once I get on stage, everything becomes a blur and I just play.”

Pura’s tenacity and ferocious work ethic is deeply ingrained in his personality.

“I’m old-school,” says the 62-year-old Pura. “I plied this trade as a folk singer for seven years even before The Jerks.”

That’s nearly 50 years earning his living by playing music. It’s the ethos of the puwesto—the gig—that separates working musicians such as Pura from many younger musicians.

The Jerks is an example of the quintessential bar band. Pura and his bandmates never became rock stars like their predecessors in the Juan de la Cruz Band or later, the Eraserheads, but they’ve lasted a lot longer.

Pura has penned his share of classics: “Romantic Kill,” “Reklamo nang Reklamo,” “Sayaw sa Bubog,” “Rage” and a handful of others.

But the bulk of The Jerks’ live sets are covers: classic rock by the Rolling Stones and The Doors, new wave by The Police and Joe Jackson, the occasional left-field choices such as Steely Dan.

In its 40 years of existence, it released only two albums, “The Jerks Live” (1994, Backdoor Records) and “The Jerks” (1997, Star Records), and a few tracks in compilations. Playing live defines The Jerks.

“Every day, you have to be on your toes,” says Pura. “It’s always touch and go.”

Early this year, he was diagnosed with T-cell lymphoma, a rare form of cancer that might be related to the erythrodermatitis he has suffered for the past few years.

For the first time since his late teens, he was too weak to go onstage. It was anathema for a consummate professional who hated to cancel a gig. Performing live was a big part of himself. He fell into a deep depression.

His doctors recommended courses of radiation and chemotherapy, but Pura balks at the thought of being sidelined even longer by the side effects.

He has opted to explore alternative therapies before anything else. Judging from his current energy levels and high spirits, they seem to have had a salubrious effect.

He’s gone back to playing live, at My Brother’s Mustache as a solo act, and the Roadhouse Manila Bay with The Jerks. He manages the cracked skin on his fingers by wearing nylon gloves to play guitar, and has been playing longer and harder than usual, because he felt “deprived” during the months when he couldn’t play, he says.

“I was overwhelmed by the response,” says Pura. “I didn’t expect it. People were very passionate.”

In fact, the show at My Bro’s Mustache yielded at least one magic moment when Jerks alumni Jun Lopito and Adriano stepped onstage to join Pura, causing grown men in the audience to get all misty-eyed.

Someone requested “Romantic Kill,” The Jerks’ opening salvo on radio back in the day and a song they seldom do live. Lopito started playing the opening riff, and Pura said what the hell … let’s do it.

Such off-the-cuff spontaneity, those in-the-moment moments, make The Jerks such a great live band in the first place.

Pura was first bitten by the music bug as a teenager in his hometown of Bulusan, Sorsogon, via Jingle magazine.

His father wanted him to become a doctor, so he enrolled in B.S. Zoology at the Far Eastern University in Manila.

Pura, however, was far more interested in learning to play guitar in his dormitory at the YMCA than in dissecting frogs at the school laboratory. He soon built up a repertoire of James Taylor and Neil Young songs. And “The House of the Rising Sun.”

“In those days, you couldn’t be a folk singer if you didn’t know ‘The House of the Rising Sun’,” he says.

It was the mid-1970s, the first wave of Pinoy rock had come and gone, folk music was the new thing, and folkhouses sprouted from Malate to Diliman.

Being an unknown, Pura started out playing for a sandwich. Eventually, he was good enough for the better-known folk houses: Kola House, the Last Unicorn, Pension Filipina and TGIF on Morayta. Pura soon dropped out of college to begin the life of a journeyman musician.

Not being a folk purist, he began to experiment with his set, playing blues with harmonica player Gils Dawag. This caught the attention of ace guitarist Lopito.

“Lopito had observed my inclination to cross over, and asked me if I wanted to play rock ’n’ roll with his band,” recalls Pura.

The band turned out to be Joey Smith and the Airwaves. Lopito failed to mention that Smith had a penchant for showing up late, hence the need for an understudy, which was where Pura came in.

“We rehearsed songs from the Stones’ [album] ‘Some Girls’ which had just come out, as well as songs by the Sex Pistols, the Dead Boys, the Stranglers,” recounts Pura.

It was the first time Pura heard the term “punk rock.”

The gig turned out to be a one-time thing, but it made a lasting impression.

“I almost lost my voice that night, but I knew I wanted to have my own band,” he says. “It was so exhilarating. I was jumping up and down.”

At a subsequent folk house gig, the sound technician asked if he could sit in on guitar. The tech guy turned out to be Adriano. He had once been regarded as “the Jimi Hendrix of Angeles City” with his band Sparks, but he had missed the peak years of Pinoy rock, having been in jail for playing with the wrong chemicals. Now he was keen on getting back into music.

Pura and Adriano stole bass player Boy Matriano and drummer Flor Mendoza from another band, and started rehearsing material by Talking Heads, the Ramones, the Sex Pistols and the Dead Boys.

The fledgling band played its first live gig at TGIF as The Boys, with Lopito on second guitar. The Boys became The Jerks later in 1979.

“It was short and easy to remember,” says Pura.

The Jerks soon landed a regular gig at Shakey’s Taft, playing on the same bill as Abracadabra and the Dynasouls, veteran night club bands of the ’60s.

Such was The Jerks’ inauspicious debut: having to compete with plakado versions of “Bohemian Rhapsody” for an audience loaded on beer and pizza.

It was David who pestered them to record original songs, resulting in Pura’s first compositions, “Romantic Kill” and “Big Deal,” and a ska version of the Beatles’ “Day Tripper.” The tapes went straight to Howlin’ Dave, who lost no time playing them on DZRJ.

The Jerks would be followed by a whole slew of bands such as Chaos, the Urban Bandits and Betrayed. There was one crucial difference, however: The Jerks was composed of musicians first, punks second. Most of the bands that followed were the other way around.

Howlin’ Dave was also instrumental in landing The Jerks a residency at On, a bathhouse for homosexual hookups by day, new wave discotheque by night. Howlin’ Dave spun records, alternating with live sets by The Jerks, for a jet set crowd that included actors, models and the scions of Marcos officials.

By 1982, however, Marcos was losing his grip, and the economy was in shambles. The music scene in Manila dried up, On closed, and The Jerks headed north for greener pastures.

Olongapo City was still rock-’n’-roll heaven for local bands, the club scene kept jumping from regular visits by the US Navy’s Seventh Fleet. The Jerks landed a residency at the Acme nightclub, with a cash advance of P125,000—a small fortune in 1982 and more money than the Jerks had ever seen before—or since.

“That’s where my skills were honed—one hour and 15 minutes per set, three sets a night, four nights a week from Wednesday to Saturday,” says Pura. “We learned to pace ourselves.”

When the Olongapo stint ended in 1988, the band landed a contract with a supper club outside Tokyo.

“It was only four months but it felt like forever,” says Pura. “I found myself singing ‘Itsy Bitsy Teeny Weeny Yellow Polkadot Bikini’ and ‘Anak’ on request. But I got a lapad (10,000-yen note) as tip.”

By the time he returned to Manila, Pura was a battle-hardened rock-‘n’-roll veteran.

In 1989, he and Adriano were invited to join a studio “supergroup” formed by Ed Formoso, to be called Lokal Brown. It included Edmond Fortuno, Asin’s Lolita Carbon, Pendong Aban and Saro Bañares, Deans December’s Binky Lampano, Music and Magic’s Eva Caparas
—and The Jerks.

Pura sang on “This Is Not America,” the lead single of the resulting album “This is Lokal Brown.”

In Japan, Pura had listened intensively to The Clash’s “Sandinista” album, and become more and more “woke.” He attended songwriting workshops by protest singers Jess Santiago and Gary Granada, and joined Musicians for Peace, a human rights advocacy group. He contributed “Warning” to the landmark “Karapatang Pantao” compilation produced by the Ecumenical Movement for Justice and Peace.

The punk had become an activist.

By this time, The Jerks was playing regularly at Red Rocks, a club on Timog Avenue where the nascent alternative music scene that included the Eraserheads was germinating.

Red Rocks was renamed Club Dredd, but for the next 20 years, The Jerks played on Fridays and Saturdays at Mayric’s on España, Manila, and the 70s Bistro on Anonas, Quezon City.

This was The Jerks that most of its fans remember, with Pura and Adriano plus a revolving chair for bass and drums that included Edwin Aguilar, Pino Fernandez, Angelo Villegas, Benjie Santos, Brutus Lacano, Paolo Manuel, Jong Cablitas and Rene Tengasantos.

“We were the link between the old guard of Pinoy rock and the alternative generation,” says Pura. “We kept the continuity, playing with Pepe (Smith) while inspiring new generations.

After Adriano’s quitting the band in 2011, The Jerks have soldiered on as a trio. Pura has no intention of hanging up his rock-’n’-roll shoes just yet.

“It’s not lucrative work, but it keeps you going,” he says.

Fans are hoping Pura and Adriano can set aside their differences long enough to play a 40th anniversary gig, preferably with guest spots from everyone who’s ever played a part in The Jerks story.

Meanwhile, a group of deans and professors from the University of the Philippines (UP) have organized “Shine for Chickoy” on Sept. 27 at the Oblation Lounge of the UP Hotel, a fundraising-cum-tribute concert.

“I told them, ‘While you’re at it, how about giving me an honorary degree?’,” laughs Pura.