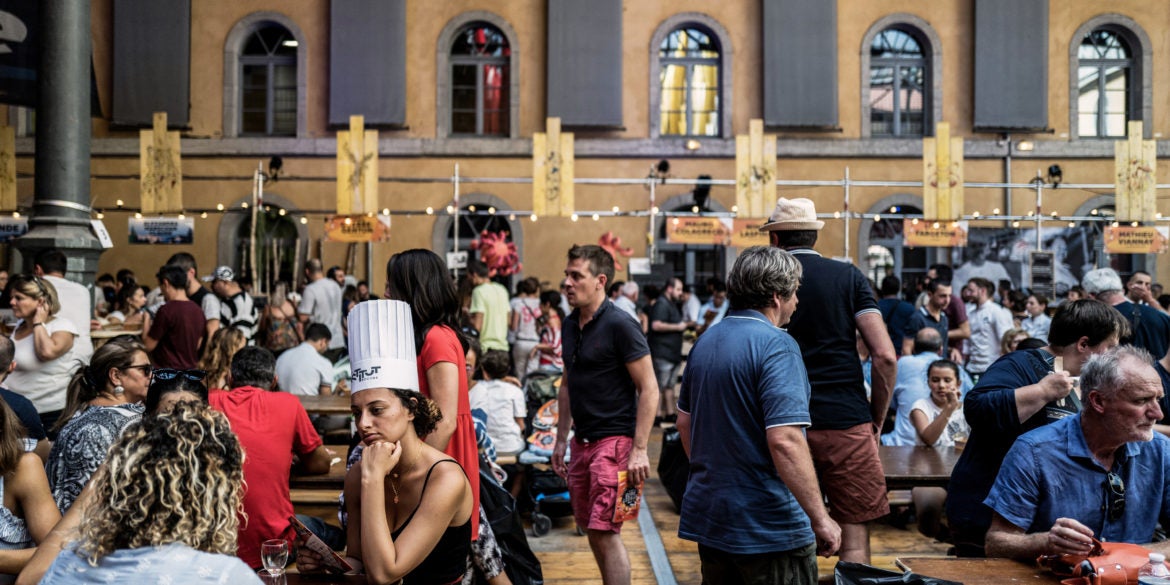 people visit the Lyon 4th street-food festival in the southeastern city of Lyon on September 14, 2019. (Photo by JEFF PACHOUD / AFP)

Mauro Colagreco, the multiple award-winning Italian-Argentinian chef, joined 80 of his fellow cooks on Saturday to serve food at the Lyon Street Food Festival in southeast France.

Colagreco, the chef at the Mirazur in Menton on France’s ritzy Cote d’Azur, is the only foreign chef working in France to have been awarded three stars in the Michelin guide.

In June, his restaurant was named the best in the world by an influential trade list, the World’s 50 Best Restaurants.

But on Saturday he was serving up dishes in one of Lyon’s squares, at the fourth edition of this four-day event.

He was joined by chefs from around the world, with professionals coming from Canada, Turkey and four destinations specially featured at this year’s festival: Kobe, Hong Kong, Madrid and Finland.

“It wasn’t easy, precisely because we use quality products, like squid, which are fairly expensive products,” he said.

“But we always manage — especially when we do them in large quantities — to get to an acceptable price,” he said.

Other Michelin-starred chefs taking part included Romain Meder, chef of the Plaza Athenee in Paris; Mathieu Vianney, chef of the Mere Brazier in Lyon; and Serge Vieira, who cooks at the Chaudes-Aigues in the central French town of Cantal.

Emeric Richard, co-organiser of the festival, said the event was about introducing great cooking in a simple way to the general public.

The organisers even asked this year’s participants to serve slightly larger portions. That way, visitors could have a three-course meal with drinks for no more than 20 euros.