How BenCab is living with BenCab the brand | Inquirer Lifestyle 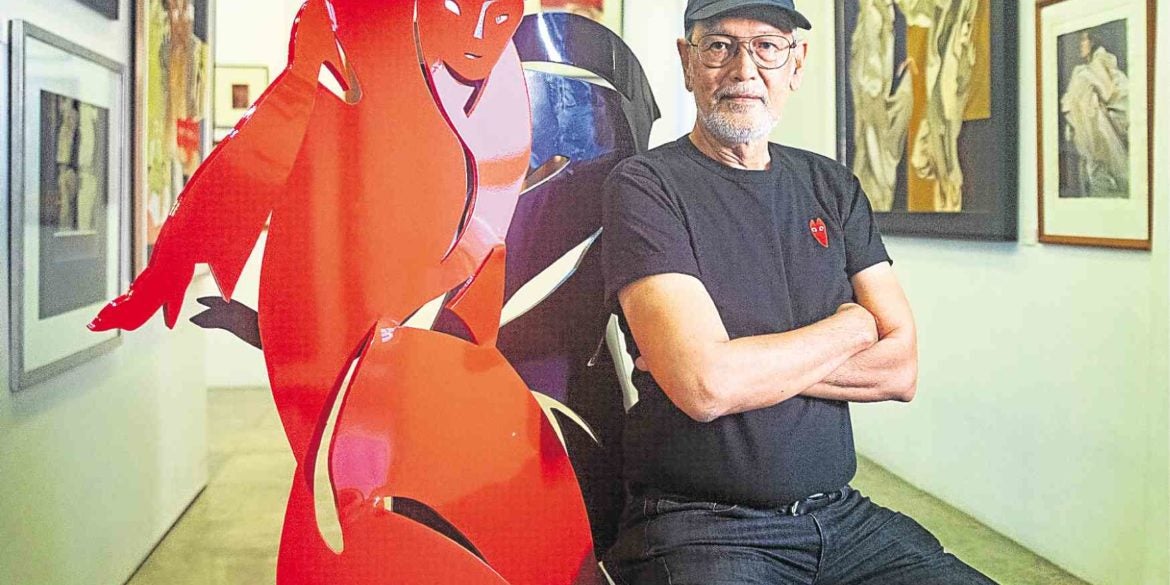 BenCab at the BenCab Museum,with one of hismetal sculptures that are on permanent exhibit

How BenCab is living with BenCab the brand

At 77, when many of his peers are withdrawing into isolation, the National Artist is trying to reach a wider, younger audience. He launches book on Sept. 25

It had been raining nonstop in Baguio for days when we arrived at the BenCab Museum.

Standing on the terrace in his customary black jeans, black T-shirt and black ball cap against the white mist-shrouded mountains and gray sky, the artist called to mind the poet on a mountain in one of those classic, monochromatic Chinese paintings. Li Po, perhaps, who wrote a poem called “Alone, Looking at the Mountain.”

BenCab is seldom alone, however.

Even with the rain, the museum is full of visitors, and as he walks through the various galleries, the artist is deluged with requests for photos and selfies which, more often than not, he graciously accommodates.

This is the central contradiction in BenCab’s life at the moment: If you ask him, he’d say he’d rather be in his studio drawing or painting. But the very success of his artistic efforts has made him a recognizable public figure, specially to the millennials who make up the bulk of selfie takers.

Finding the balance between private person and public artist can be tricky, but BenCab has managed it better than most.

“I guess I’m just an approachable person,” he says. “It’s my background. I grew up in Bambang, I worked in a newspaper, I was exposed to the Ermita art scene. There are artists who are of the ‘ivory tower’ kind who don’t want to be approached. I remember Ang Kiukok didn’t like going to public functions. But I’m not like that.”

The word “iconic” is overused, but in BenCab’s case, it is apt. His imagery has seeped subliminally into our collective consciousness, such that it has become visual shorthand for “Filipino.”

Consider, for instance, the use of his “Woman with Fan” from the landmark “Larawan” series on the cover of Gina Apostol’s current international bestseller “Insurrecto.” Or the myriad permutations of the derelict figure “Sabel” which has come to stand for the Filipino condition.

Like it or not, the image of “Filipino” on the global stage sometimes takes the form of a BenCab painting.

“Because of his stature and renown, his style has often been viewed in shorthand; and his figures on canvas have been easily consumed as icons,” writes critic Patrick D. Flores in “BenCab Filipino Artist,” a new book on the artist’s work which will be launched Sept. 25, with a companion volume cataloging 50 years of his art.

The book, Flores continues, “tries to understand how he tells stories visually and how these stories interpret what it means to be Filipino.”

“The ‘Filipino’ is an impossible ideal. In Philippine art history, artists have endeavored to invoke [it as] a way to be true and timely, to be in their place in time, even as art inspires them in similar vein to transcend whatever it is that make sense as the here and now.”

Through his art, BenCab makes the continuing hold of the past manifest even as we look toward to the future in forging our identity in the present, toward that impossible ideal.

The notion of the artist as public intellectual is a fairly recent one, but in his own way, BenCab has been engaged in the social and political discourse of our times from the beginning.

He did this from a distance during his sojourn in London through his “Sabel,” “Larawan” and “Larawan II: The Filipino Abroad” series, but since his return to the land of his birth in 1985, he has become increasingly engaged with his public.

In 1991, he became president of the Baguio Arts Guild and two years later, as chair of the 4th Baguio Arts Festival, he helped put his adopted city on the global art map.

Nevertheless, his engagement has only grown since he was named National Artist for Visual Arts in 2006. The accolade, he understands, comes with a requisite responsibility to be a cultural ambassador of sorts, hence his willingness to pitch in as a judge for art competitions and a speaker at school functions.

“When you get invited to these things, you appear, you do what is expected of you,” he says.

The BenCab Museum, which is celebrating its 10th anniversary this year, is the concrete expression of BenCab’s public life.

His original idea was a private museum to house his personal collections: of his own artwork, Cordillera tribal art which he felt was underappreciated, erotica which has been a long-standing fascination, and works by other artists that appealed to him.

He could not have predicted how wildly successful it would become.

Now one of Baguio City’s main tourist attractions, it drew almost 3,000 visitors in the last three-day weekend, the artist reports. It now features a year-round program of exhibits, which BenCab curates himself, his personal taste being the final arbiter.

More significantly, it started a trend for other private museum destinations, such as the Pinto Art Museum in Antipolo, Rizal, the Museo Orlina in Tagaytay City and the Iloilo Museum of Contemporary Art.

The BenCab Museum sits on a working farm in Asin. They grow the arabica coffee served in the café, among other crops. The artist himself planted many of the trees in the impressive landscaped forest that faces the museum.

“I want to paint but sometimes it’s nice to putter around,” he says. “I have a lot of bonsai, and with the farm there’s always something that needs doing.”

When he was a young boy living in Bambang, Tondo, he recalls, he would always have little plants growing in tin cans. Now he has a mini-rainforest thriving around him.

BenCab is not inclined to rest on his laurels, even though his works are among the most sought-after by collectors and routinely top auction sales.

“Some people call my art popular because it’s easily understandable,” he says. “I deal in humanistic subjects.”

Of course, the same accusations have been hurled at Amorsolo, Manansala, Francisco and, for all we know, Luna and Hidalgo before them, so he’s at least in good company.

BenCab typically just shrugs it off. What are you going to do? People like his paintings which fetch high bids at auctions.

Most of the time things just fall on his lap. Out of the blue, an invitation to exhibit his works in a Hawaii museum. Or an offer to participate in the “Asia Now” art fair in Paris. BenCab’s stature as an artist creates its own opportunities, and he has learned to take it all in stride.

At the end of the day, he just wants to continue drawing and painting and creating art.

“Some people like to call me ‘maestro,’ maybe because I’m a senior artist,” he adds. “But as one gallery owner told me, ‘Ben, you’re not a modern master, you’re a contemporary artist.’”

At an age when many of his peers are beginning to repeat themselves, or withdrawing into isolation, BenCab is still trying to reach a wider, younger audience.

For the last two or three years, he has been collaborating with the Secret Fresh Gallery, a coterie of mostly young artists who are into pop surrealism and graffiti art, and limited edition “drops” of products such as vinyl toys, figurines, garments or other merchandise.

Secret Fresh x Bencab was a collaboration in which a limited run of sculptures based on the artist’s “Sabel,” “Larawan” and “Mother and Child” series was produced.

Everything sold out in record time.

“Yes, it’s commercialization but it’s also sharing your images with a wider public,” he says. “You cannot paint for everyone. I like the Secret Fresh people, they’re straight. I like being among people who think differently about art. I can relate to them. They also have a lot of buyers who are not the usual collectors.

“In a way, it’s like going back to the Indios Bravos days,” he adds, referring to the legendary Malate café that was the hub of bohemian Manila’s literary and art circles in the late 1960s, when he was just starting out.

BenCab is working on a collab with the well-regarded British audio equipment makers Rega: a limited run of 100 Rega turntables featuring a BenCab design, which should whet the appetites of well-heeled vinyl enthusiasts. The turntables will be distributed by Secret Fresh.

BenCab + Moooi Carpets is the artist’s second collaboration with the Dutch carpet makers. Series 7, to be launched on Sept. 25 with the books, will feature seven BenCab designs, in editions of seven per design.

It’s the birth of BenCab, the brand.

“I’ve even trademarked ‘BenCab’ to protect my name,” he says.

Even as he embraces post-modern pop art practice, however, he keeps going back to his grounding in the studio arts. Unlike other “maestros,” he has no apprentices or assistants. He still stretches and primes his own canvas. Located in between his private residence and the museum, his studio is his happy place, a buffer zone between the private man and the public artist.

“Ganado pa ako,” he says. “I’m thinking of new series to do, although my practice has been continuous, like drawing from life.”

For one thing, he’d like to complete his series of portraits of Filipino writers, drawn from life. Thankfully, he managed to get Nick Joaquin and Cirilo Bautista to sit for him before they passed.

BenCab turned 77 last April. According to the esoteric philosopher Rudolf Steiner, man’s life evolves in seven-year cycles, each marked by specific concerns and challenges. These cycles are subject to planetary and other influences, but 77 is the boundary beyond which the individual responds to higher spiritual forces, and the rest of his life on earth is a gift.

If Steiner is right, BenCab may still have a few surprises left for us.