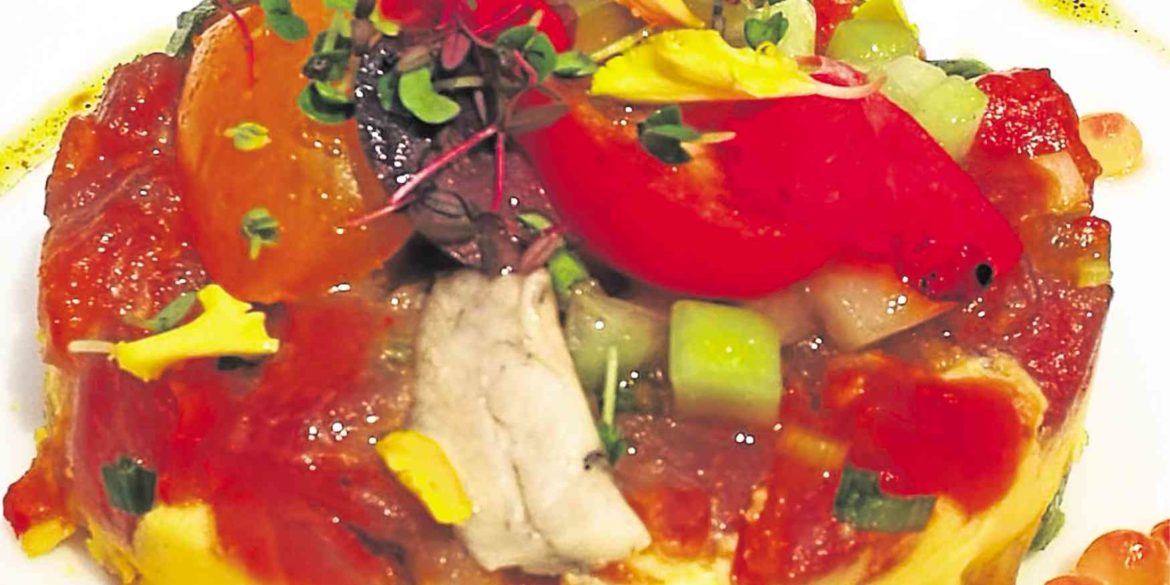 The ultimate goal of rice sufficiency and an overwhelming desire to help Filipino farmers affected by Supertyphoon “Yolanda  in 2013 were the prime reasons Italian Patrick Renucci and his Filipino wife Rachel Tan moved back to the Philippines.

Renucci tapped his close friend, chef David Sénia, to come up with a four-course dinner—aside from the six canapés served at cocktails. Senia is based in Singapore.

“My husband and I were doing well in our respective jobs in Paris but the images of the destruction caused by Yolanda shook us to the core,” Tan said. “We sold everything we owned and went back to Leyte. We felt the need to give our love back to Leyte, to the Philippines.”

The couple partnered with the Department of Agriculture and Chen Yi- Agventures to set up the Renucci Rice Processing Center in the municipality of Alangalang, 24 km from Tacloban, Leyte.

The technologically advanced rice processing center is fully automated with the production process centralized and operated via touchscreen panels in a single control room.

Palay (unhusked rice) is stored in temperature-controlled wet bins before and after drying to maintain freshness.

Rice is the highlight

“No bread will be served tonight,” Sénia told Lifestyle, with a mischievous twinkle in his eye before the dinner last week.

This is not the chef’s first time in the Philippines. Before honing his skills in several Michelin-star restaurants in France (Chateaux Eza in Eze Village, L’Oasis in La Napoule, and Chantecler at Hotel Negresco Nice), he worked at Old Manila at The Peninsula Manila in 1997.

“There were only four major hotels in Makati at the time,” Sénia said. “I’d never been to the Philippines, I only knew that it was in Asia.”

It was a new continent, one that initially left him puzzled.

“How come the tomatoes here aren’t red? Why was there only one kind of asparagus available? There was not much to choose from so we had to look for farmers who grew the types of vegetables we needed in the kitchen.”

The chef who hails from the south of France said that he makes use of a lot of fresh produce in his cooking, with copious amounts of olive oil.

For the gala dinner, he prepared marinated tuna with “egg yolk cream,” ikura (salmon roe) and rice flavored with spices.

“This morning, I was in the kitchen and I asked one of the staff to list four spices Filipinos like. I was told cinnamon, star anise, cloves and bay leaf so I started to cook the rice flavored with these spices,” Sénia said.

The chef was amazed that Filipinos use their fingers to measure the water to cook rice. “I thought they had overcooked it but when the rice cooled down, it became fluffy. It was perfectly cooked.”

For the second course of sautéed sea bass with crispy risotto, Sénia cooked the rice like he would a risotto (smooth and creamy), spread it on a pan and allowed it to cool before cutting them into rectangles. He then sautéed the rice in olive oil to give it a crispy exterior before plating it with the fish.

Around it were gobs of aioli, the tasty Mediterranean sauce made of garlic and olive oil.

The chef and his team prepared and plated everything in the open kitchen adjacent to the ballroom.

Throughout dinner, Sénia gamely posed for photos, and handed out portions of cochinillo stuffed with Dalisay rice (the main course) to the lucky ones hovering near the kitchen between courses.

“I’m proud of all these dishes that came together in two days,” he said.

“That’s what I do, I craft recipes that combine elements of my childhood in the south of France with skills I learned in Europe and Asia.”