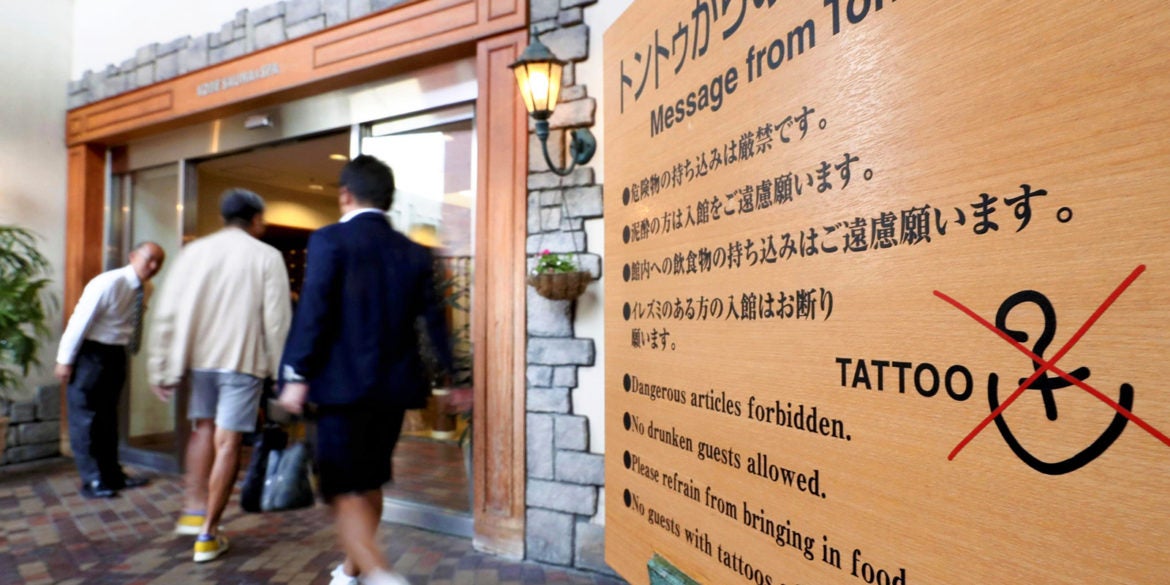 A sign at Kobe Sauna & Spa in Chuo Ward, Kobe, says people with tattoos are not allowed to enter. The Japan News/Asia News Network

In Japan, public baths mull whether to accept guests with tattoos

TOKYO — With the Rugby World Cup expected to draw about 500,000 visitors to Japan, attitudes have been split among public bath operators nationwide over whether to accept foreign customers with tattoos.

Some facilities will accept such customers for a limited period of time in keeping with the “omotenashi” hospitality spirit, but there are still many operators who refuse to let them use their facilities. The Tokyo Olympics and Paralympics are expected to draw even more foreign visitors, and the public bath industry is trying to find the best course of action.

“There was both support and opposition among our employees, but we decided to accept them in order to cooperate with the World Cup, an event that many citizens were involved in bringing to Japan,” said the president of the company that operates Hotel Kinsenkaku in Sanage Onsen. The hotel is located about 30 minutes by car from Toyota Stadium in Aichi Prefecture.

Ahead of the opening of the World Cup on Friday, Kinsenkaku was expected to have many customers from Western countries where tattoos are commonplace. The hotel usually bans guests with tattoos from bathing, with the aim of excluding organized crime syndicates, but has decided to allow foreign guests who have them during the World Cup.

About 20 people from such countries as Australia and Britain have booked with the hotel so far. Although the hotel has not checked if they have tattoos, it has asked for Japanese guests’ understanding of the exception through its website and a notice posted in the facility.

Solaniwa Onsen in Minato Ward, Osaka, plans to halve its admission fee if customers show tickets for the rugby matches to be held in Osaka Prefecture and Kobe. Foreign visitors with tattoos will be asked to cover them with stickers 10 centimeters long and 14.5 centimeters wide sold at the facility, and will be allowed to enter if they can hide their tattoos with no more than five stickers.

In Beppu, Oita Prefecture, a city with one of the largest number of hot spring resorts in the nation, the local government has created a PR video aimed at foreign visitors, in which naked men with towels wrapped around their waists pass a pail as if it were a rugby ball.

The Beppu City Ryokan Hotel Association considered letting foreign visitors with tattoos bathe at all public baths in the city, and conducted a survey on about 2,000 Japanese guests between March and June. Only 12 percent of respondents said they were alright with the idea, and the association ultimately shelved the prospect of allowing foreigners with tattoos to bathe at all facilities.

Instead, when foreign visitors with tattoos check into hotels and inns in the city, the association will guide them to municipal hot springs that they can use. The Beppu Onsen website “ENJOY ONSEN” also lists about 100 places that will accept people with tattoos.

Public bath facilities in Yokohama, where the rugby world cup finals and other events will be held, will not admit visitors with tattoos during the event. A city official said, “Tattoos have a strong image of antisocial forces and scare customers.”

Tsuru University Prof. Yoshimi Yamamoto, who specializes in cultural anthropology, said: “In Europe and North America, many people get tattoos of family member’s names or other designs for fashion. To avoid trouble resulting from such cultural differences, facilities that won’t let in customers with tattoos should say so on their website and explain why.”

The Rugby World Cup organizing committee has distributed rash guards, a formfitting shirt often worn by surfers, to players from participating countries, hoping they will wear them at swimming pools and public bath facilities. The committee has received no complaints so far.

World Rugby, an international governing body headquartered in Ireland, has been advising the national teams for more than three years to respect Japanese culture.

“Players seem to voluntarily hide tattoos at pools and saunas in Japan,” a World Rugby official in charge said.

According to a Japan Tourism Agency survey conducted on about 3,800 public bath facilities in 2015, about 56 percent refused to allow people with tattoos to enter their establishments. The response rate for the survey was 15 percent.

“Many regular customers at public bath facilities are in their 50s or older, and strongly want to avoid tattoos,” said a representative of Onyoku Shinko Kyokai, an association comprising leisure bath and spa facilities, including places known as “super sento.”