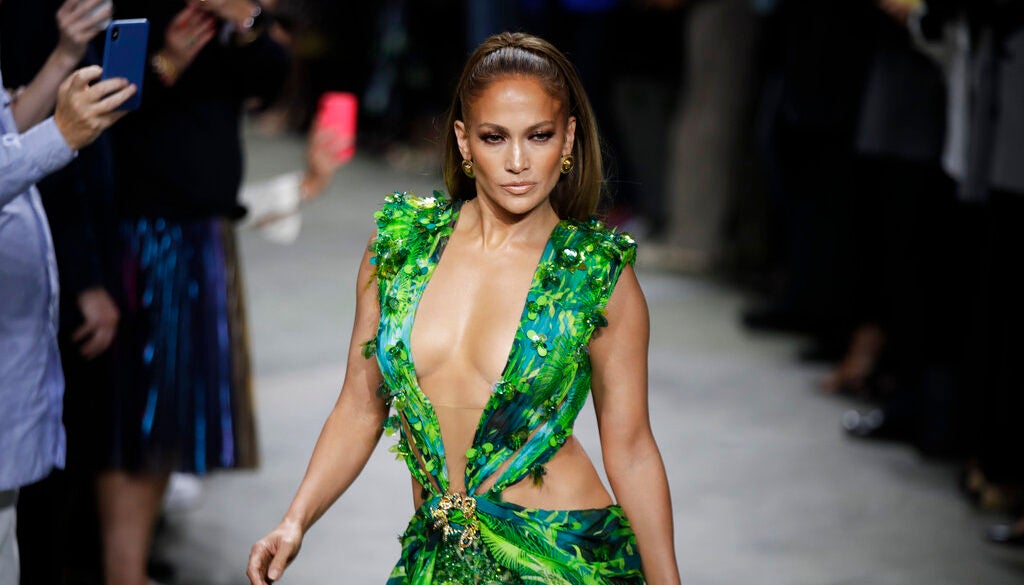 MILAN — Jennifer Lopez won Milan Fashion Week, wowing the crowd at Versace when she emerged wearing a version of the jungle dress that nearly broke the internet almost 20 years ago.

Building up to the big reveal, Donatella Versace announced from backstage a Google search for “Versace jungle dress,” and a dome ceiling above the circular runway filled with images of J-Lo wearing the 2000 Versace dress at the Grammys.

Then Versace intoned: “The REAL jungle dress,” and Lopez appeared in an updated version of the iconic gown, which maintained the plunging neckline but in a sleeveless version and with a train that billowed below the open back. Not a smart phone remained dormant as the fashion crowd jostled to catch video of the fashion ah-ha moment.

The original jungle dress made not only fashion history, but Google history. According to Versace’s press notes, millions of people searched Google in an effort to see the dress, inspiring the tech giant to create Google Images.

“The world had the same reaction: jaw-dropping,” Versace said in show notes. “Today we live in a technological world, but back then, one event promoted the creation of a new tool that now has become part of our lives.”

Versace returns to the jungle

For next spring and summer, Donatella Versace did what she does best: Make fun and cheeky fashion.

Versace started low-key with a series of little black dresses, revealing in a business-like way, worn with strappy, nearly invisible sandals, some wrapping up the leg gladiator-style. The collection played with the tailored silhouette, enlarging the shoulders in an apparent ode to the 1980s, and keeping the waist cinched.

The real star was the jungle print, as the fashion house celebrated the 20th anniversary of the iconic jungle dress worn by Jennifer Lopez. A street version of the same dress, with a bandeau top to break up the plunging neckline, appeared in standard green and eye-popping orange and red, both worn with psychedelic tights. More subtly, the print over-laid a very masculine gray Prince of Wales check jacket, giving a slight acid-wash effect, and accented tie-dye T-shirts. Palm motif also appeared as pins and metal mesh, while leaves adorned plastic sliders and the laces on some Roman-sandals, like a creeping vine.

The styling was strong on trademark Versace hardware. Tiny metallic bags were worn like jewelry, three at a time. And golden bangles worn off belt loops were very tongue-in-cheek, including pill packs, a tape dispenser and an open matchbook. Eyewear resembled welding glasses.

On a day when thousands of people marched worldwide to combat climate change, Marni took a first step toward making the collection more sustainable.

Designer Francesco Risso said the season “marks a new beginning,” as the fashion house is both trying to raise awareness about plastics through artistic collaborations and work with more organic and recovered textiles in the runway collections. Marni also did not send out physical invitations this round.

“When I hear sustainable, I get a bit itchy, because it is easy to promote that word and not really be sustainable,” the designer said after the show.

This season’s Marni print is hand-painted, by Risso and his team. The collection of all skirts and dresses — there were no trousers — had a raw, almost post-industrial feel, as if they were constructed from a memory of a peasant blouse and skirt or twisted Tahitian skirts. While the looks had a primitive touch, emphasized by the hand-painting and the mud-slicked hair, muslin skirting under dresses gave a couture edge.

“The process was a lot about freeing silhouettes,” Risso said. “This is our joyous progress.”

Marco De Vincenzo set his runway show against the watery backdrop of Milan’s Darsena, linking the city’s major canals, for a collection that was a study of color and motion.

The collection was titled “The Wave.” And movement was evident in the knitwear molded into three-dimensional patterns, tight pleats on dresses with laser-cut detailing, clingy dresses with a wavy pattern beneath sheer organza shirt and skirt, metallic fringe on a shimmery crop top and skirt combination and tiered chiffon dresses.

It was his first monochrome collection and he put it to good effect. Each of the 47 garments was a different color, even if just a shade off the one before, so that when the models completed the finale, they posed briefly on the arching bride over the canal, forming a fleeting fashion rainbow.

Antonio Marras has woven a yarn about an unlikely romance between a Sardinian shepherd and Japanese princess as the backstory for his collection for Spring/Summer 2020, centering around interpretations of the kimono.

“The collection is a meeting between two worlds that in many ways are opposite, but they amalgamate, which gives novelty to this collection,” Marras said.

Japanese prints are the starting point for the looks, and kimonos are deconstructed and reinterpreted as dresses, jackets and skirts worn with collared shirts. One kimono dress was constructed out of contrasting materials — lace, plaid cotton and jacquard — and fastened with a long, trailing karate belt.

The collection was presented in a theater, with a Japanese theater performance in the background. The arrival of the Japanese princess, wrapped in a regal red robe, signaled the close of the show.