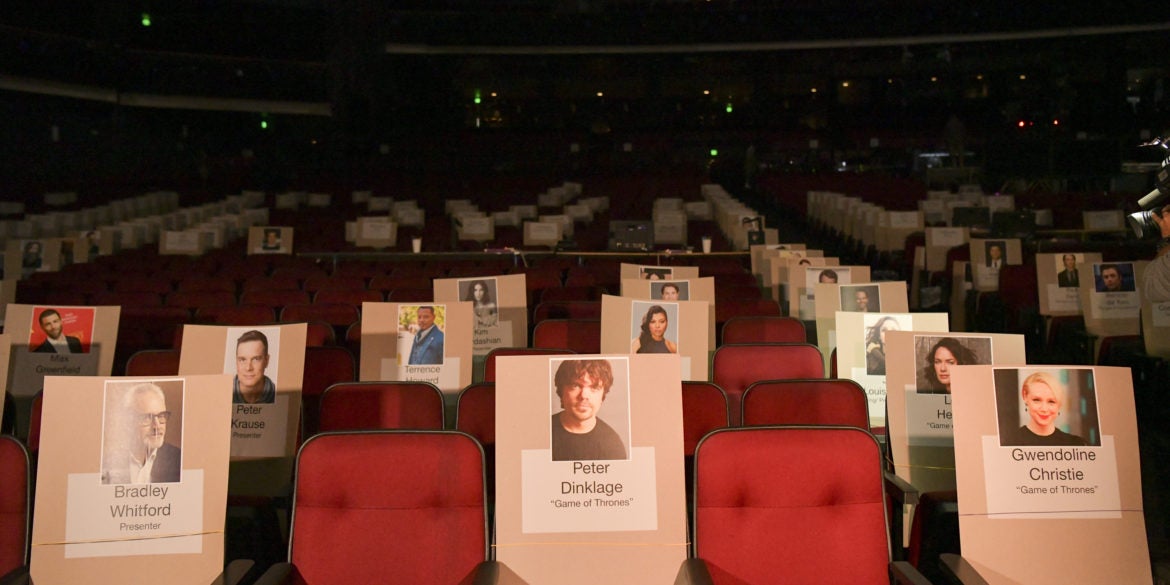 Five things to watch for on Emmys night

Television’s glitzy big night out is upon us — the 71st Emmy Awards kick off Sunday evening in Los Angeles.

A little show called “Game of Thrones” looks set to dominate the proceedings one last time. But there is more to television’s Oscars than the blood-spattered fight for the Iron Throne.

Here are five things to look out for:

No host, many stars

The Oscars went without a host in January — and the streamlined ceremony got a 12 percent bump in total number of viewers. So few in Hollywood were surprised when the Emmys followed suit.

The lack of a host means the focus will turn to the starry lineup of A-list presenters, including Gwyneth Paltrow, Ben Stiller, Michael Douglas, Naomi Watts, Julia Louis-Dreyfus… and the Kardashian clan.

All 10 “Game of Thrones” acting nominees will also take the stage.

At the ceremony, during a skit mocking claims Hollywood had “solved” its diversity issue, Oh quipped: “Thank you, but it’s an honor just to be Asian” — a catchphrase that quickly adorned fans’ T-shirts.

This Sunday, Oh — the daughter of Koreans who emigrated to Canada — can go one better and secure a first win. Her main competition? Co-star Jodie Comer, the show’s eccentric but ruthless assassin.

Jon Hamm famously did not win an Emmy until the very last season of “Mad Men,” when his performance as suave ad executive Don Draper was finally rewarded.

With “Thrones” and “Veep” both bowing out, will Television Academy voters again see this as their final chance to right historic wrongs?

For all its Emmy success, only one “Thrones” performer — Peter Dinklage — has ever won an acting statuette. This year, a whole host are in the race, including leads Emilia Clarke and Kit Harington.

While Louis-Dreyfus (“Veep”) is certainly no stranger to Emmys glory, she may need the sentimental vote to edge out “Fleabag” rising star Phoebe Waller-Bridge.

In the emerging battle of traditional networks vs new platforms, HBO and Netflix ended in a dead heat at the top last year — at 23 Emmys each. That duel is renewed Sunday.

Long-dominant HBO has the advantage — it secured more nominations this year, and bagged more wins at last weekend’s Creative Arts Emmys, where technical and minor category prizes are announced early.

Can “When They See Us” and “Ozark” help Netflix close the gap?

With new streaming giants Disney+, Apple TV+, NBC’s Peacock and indeed HBO Max about to enter the market, a historic win for Netflix would be timely.

The 2019 Emmys could see a number of records broken.

Louis-Dreyfus would claim the standalone all-time acting record with a ninth win — the “Veep” star is currently tied with US television legend Cloris Leachman (“Phyllis.”)

“Game of Thrones” can tie the record for most best drama series wins (four) with the likes of “Mad Men” and “The West Wing.”

It needs three wins on the night to break its own record for Emmys in a single season (12). “John Adams,” the 2008 limited series, holds the all-program record for a single year with 13.