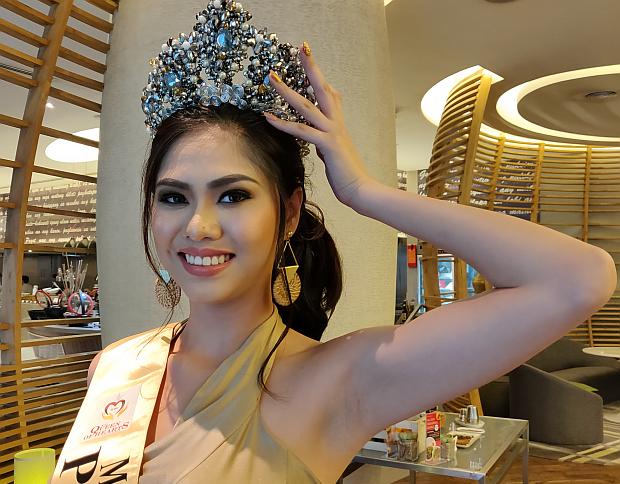 Camille Ang guns for a back-to-back win for the Philippines in the 2019 Miss Tourism Wordlwide pageant. (Photo by ARMIN P. ADINA / Contributor)

MANILA, Philippines — After her stint in the 2019 Mutya Pilipinas pageant, Imus lass Camille Ang hoped signed up for the inaugural Queen of Hearts beauty contest, desiring once again to carry the name of her province on the national stage.

But after screening for the new national pageant, she instantly found herself wearing the “Philippines” sash for the second edition of the Miss Tourism Worldwide pageant.

In an intimate gathering of local scribes at the Novotel Manila Araneta Center in Quezon City on Sept. 15, local pageant organizer Mitzie Go-Gil said she planned to stage the contest earlier to be able to select the country’s representative to the said global tilt ahead of schedule.

“But I was not able to secure sponsors because of the ‘Ghost Month.’ So I had to reschedule the competition to a later date to appease the sponsors,” Go-Gil explained.

“I contacted the international franchisee, and asked if I could just hand-pick a representative because we’re pressed for time,” she added.

After securing the international organization’s approval, Go-Gil said they chose three applicants who the organizers believed were ready to be sent abroad.

“We chose Camille to send abroad, she was the unanimous choice of the board,” she shared.

The organizer said the national search will push through next month and will crown winners for the three international competitions — Miss Lumiere International in December 2019, Miss Global Universe in June 2020, and the 2020 Miss Tourism Worldwide.

The 19-year-old Ang said she had to ask permission from the school administration and her professors at the Lyceum of the Philippines University in Manila to secure her participation in her first international beauty pageant.

“The pageant will take place during our mid-term examination week. So my professors agreed to give me the exams later,” she said.

The 5-foot-9 student has also crammed her pageant preparation, talking to designers to provide her with her national costume, competition gown, and other pieces of her wardrobe for the crucial events of the pageant.

Ang is up for an insurmountable task, with a fellow Filipino queen bagging the title in the contest’s inaugural edition last year.

Zara Carbonell, daughter of actor Cris Villanueva, took home the crown in the 2018 contest, which was staged in Indonesia.

Ang said she has not spoken to Carbonell to seek advice yet, but she is looking forward to meeting the Filipino beauty queen in Indonesia.

The 2019 Miss Tourism Worldwide pageant will culminate in the coronation ceremonies which will take place in Indonesia’s Batam Island on Sept. 22.