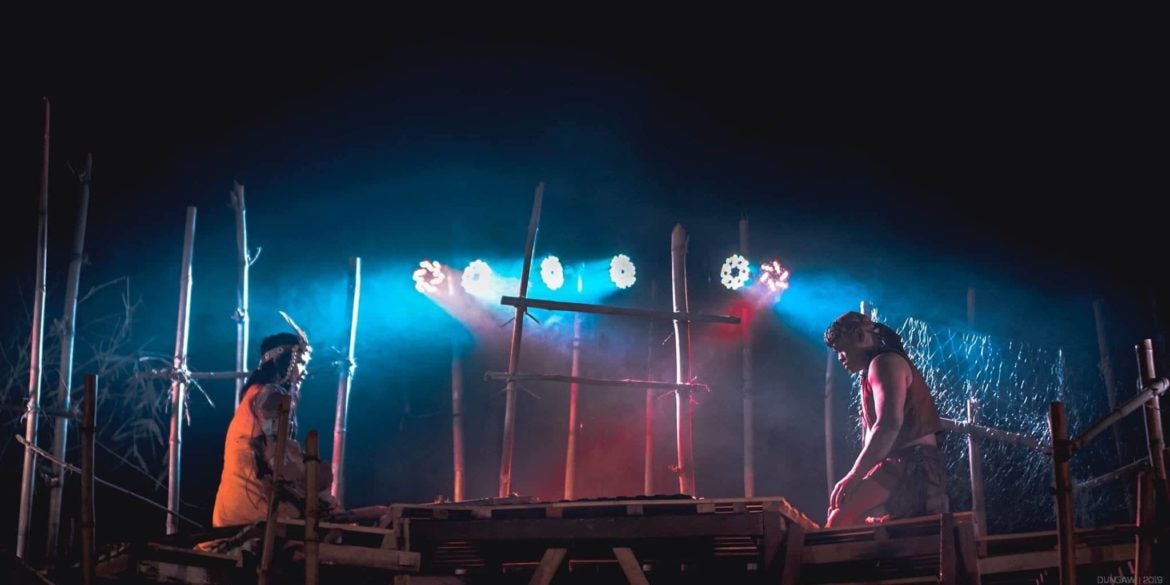 ‘Kasaray Duma’: Corruption play in the middle of 2019 campaign season

In celebration of 11th Arts Festival of Pamantasan ng Cabuyao, DUNGAW (Dulaang Batingaw) presented an original Filipino play Eljay Castro Deldoc’s “Kasaray Duma: Mga Supling ng Sigwa” last February 27-28, 2019. The play was about a fictional tribe Kasaray Duma of Sapang Kawayan Island. The local government with jurisdiction over the island forced the tribes people to leave the island to make way for the construction of sanitary landfill. The tribe leaders were in quandary because of the government’s offer of better life in a relocation site outside the island and the financial assistance to help the tribe people start their new life in a more modern place. The real intention, though, was to turn the island into a gaming paradise for foreign tourists. Bribing the tribe chieftain to convince the people to leave was the only way the mayor and the congressman could ensure that the project will push through.

The courage to present this play in the middle of a heated campaign period in the City of Cabuyao is very laudable. Under the direction of UPLB Professor Elmer DS. Rufo, the play suggested that those who seek public office but are known for land-grabbing, for irreverent and deceitful public conduct, and for fraudulence in public and private life – should not be given a chance to serve in the government. With no less the city mayor of Cabuyao Hon. Rommel A. Gecolea in the audience, the play unfolded the issues of distrust, deceit, and deception that the mayor of Sapang Kawayan would do and resort to do just to turn the island into a haven for tourists. Known for being a public servant with integrity and values, Mayor Gecolea must not have felt slighted by the play in any way. In fact, he spoke of the play after the run, “The issues raised in this play are real and very sad. We should all take part in making our government accountable to the people. But what I truly like about the play tonight is seeing the students of Pamantasan ng Cabuyao worked together to put up something like this that could equal those plays we see in UP Los Banos. As their “Tatay Mel,” I am proud of them.” Except for Prof. Egaie Salazar, all members of the cast were neophytes in theatre. Even the backstage crew, designers, musicians, light artists, and stage managers were all inexperienced which is why one can imagine the immense work and dedication put into this play by the director, Prof. Rufo. The play, as Mayor Mel puts it, could indeed pass for a UPLB play despite the fact that this is DUNGAWS’s first attempt to indigenize its plays.

Pamantasan ng Cabuyao, a local university ran, operated, and funded by the local government of Cabuyao is one of the 118 local colleges and universities in the country. It has received its CHED Institutional Recognition last 2016 and Level 1 Accreditation from the Association of Local Colleges and Universities Commission on Accreditation (ALCUCOA) last 2018 – all recognitions happened under the leadership of Mayor Mel Gecolea.

DUNGAW, the university’s theatre group, puts up plays annually during the Arts Festival, in support of the NCCA’s National Arts Month. A week-long festivity in the arts during the month of February highlights students’ gifts and talents in theatre, music, dance, visual arts, photography, prose, poetry, and digital arts.