Giving back: How one man gave Roxas City local artists their break through a colorful mural | Inquirer Lifestyle ❮ ❯ 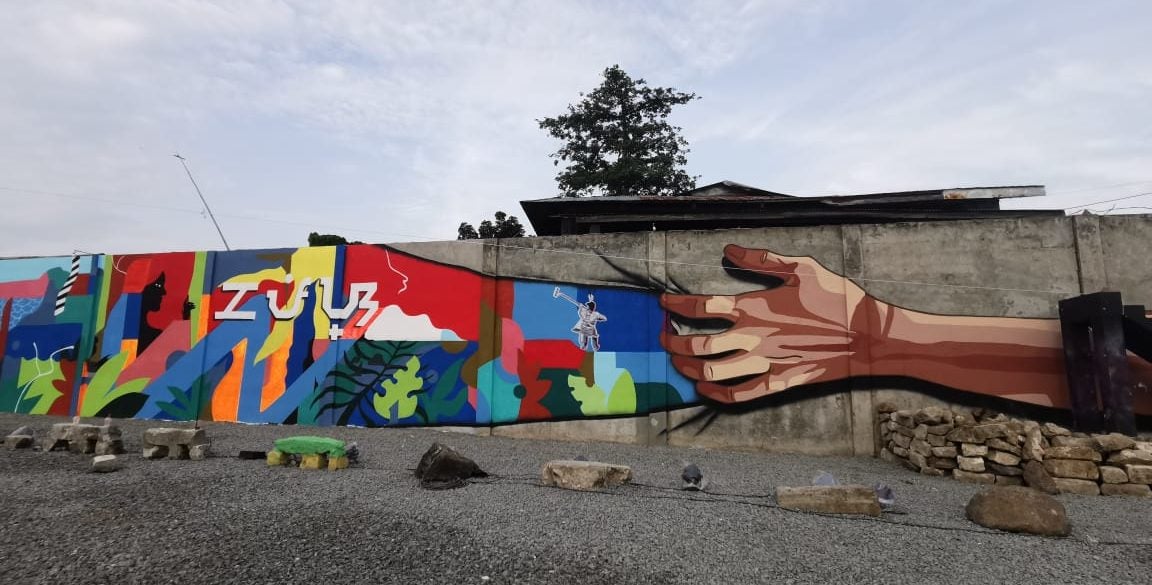 Giving back: How one man gave Roxas City local artists their break through a colorful mural

ROXAS CITY, Capiz, Philippines — It all started with a friend’s request for a sculpture.

But with a massive, plain wall that used to house a power plant in an empty lot, artist Danger Sanchez was able to transform it into a colorful masterpiece.

But Sanchez did not do it alone, as he had a 21-man team to help him achieve the idea. Fourteen from his team were Roxas City local artists.

The result of their teamwork was a mural that stretches 15 feet tall and 361 feet wide that celebrates the essence of street art, drawn from the town’s history, culture and economy.

The mural showed two hands somehow stretching a lot of ideas—a hardworking fisherman, three carabaos made of a hundred of strokes, a beautiful young woman with some butterflies behind her, among others.

And with this masterpiece, it opened the door for the local government to showcase not only local artistry, but bring the community together through good music and delicious food.

Sanchez said that it all started last year when his friend, the lot’s owner, phoned him to make him a sculpture.

(I gave him some ideas for the sculpture, but he never responded, it was as if he had forgotten about it.)

Months later, his friend phoned him again asking him for the proposal. This gave Sanchez, who admitted he was a painter rather than a sculptor, an idea.

“Pwede bang mural na lang? May wall ka ba dyan? (Is it okay if I do a mural instead? Do you have a wall?), Sanchez recalled saying, to which his friend said he has an empty space.

The artist then visited the site back in April to see the wall for himself, and immediately thought that he cannot paint the mural alone.

Sanchez, who is a partner of art gallery Vinyl and Vinyl (VOV) in Chino Roces Ave, Makati City, tapped his group composing of seven members to help him create the mural.

The lot owner also wanted the concept of “giving back,” which, according to Sanchez, was his friend’s way of contributing to the townspeople, just like the owner’s father did before him by serving as a “doctor to the barrio.”

For his part, Sanchez said that he saw the concept as easy, as he drew from his experience from his previous job with the Department of Health.

(I asked my fellow artists if the concept was fine with them. They said “okay,” then I told them we have individual tasks to do.)

Another catch was that the lot owner wanted the mural to be from local artists too, which Sanchez gladly agreed to.

As Sanchez needed all the help he could get, he went to the local tourism office of Roxas City and asked for the names of local artists that may help him with the project.

From there, Sanchez was given the name of Lloyd Develos. Develos was later tasked by Sanchez to handpick his team of local artists to help him paint the mural.

(The artists I picked, they are those from Capiz who are not well-recognized. I gave them this opportunity through this project to be recognized too.)

(Here in Capiz, they always contact me for murals, if there are art demos, I also make streamers and help with t-shirt printing.)

Aside from being an artist, Develos said that he also loves to dance. He was a dancer three years ago, but decided to let go this talent to focus on art.

Impressively, Develos achieved such a feat even if he is a person with disability as he contracted polio when he was two years old.

And with the finish product becoming a success,  Develos said he is very happy with the outcome.

(So I have big thanks because we are very happy that art has a place here in Capiz.)

And he had this message to aspiring artists who plan to abandon to pursue art: “Ito na, may halimbawa na. Bakit pa kayo titigil? Tignan niyo yung lugar natin.”

(Here it is, we have an example. Why would we stop? Look at our place.)

(Our place will prosper, we should not break away with art because we are being recognized.)