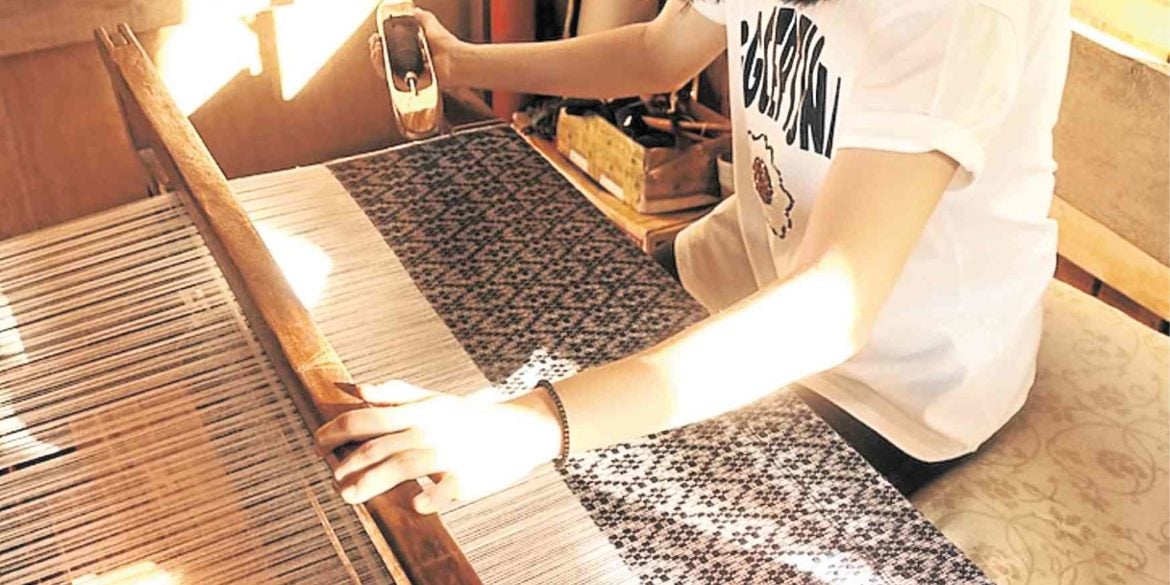 How this 17-year-old created a nonprofit slow-fashion brand

My customers don’t know that I’m a kid. When I reply to messages for orders and I say, ‘I can probably pass by after school,’ they sound shocked.”

This is Gabrielle Uy, 17, the founder and designer of The Loom Project, a nonprofit fashion brand that works with indigenous community weavers.

What started as a thesis essay for this Grade 12 student of British School Manila on how commercialization can preserve the Filipino art of weaving has quickly evolved into an advocacy and social enterprise.

While the penchant for fashion shouldn’t come as a surprise, given her background—her parents run two successful homegrown fashion brands—it wasn’t until Uy, Gabby to family and friends, began tagging along with her mom to textile fairs that she got enamored with local weaves, ergo that extensive essay on weaving communities, which entailed a trip to Benguet and the mountains of Kabankalan in Negros Occidental to meet the weavers.

The Loom Project, Uy explains, is “a slow fashion company that tries to turn Filipino weaving not only into something wearable for people my age, but also one that gives back to the community.” She wants “to create livelihood for people living in these rural areas where it’s often hard to find employment.”

The goal is to buy more looms to donate to the communities. In Benguet, for instance, “They have all the skills but they can’t make a lot of income from them because it’s sometimes three people to one loom,” Uy says.

“What really struck me and that made me want to keep doing it was when I met this girl in Baguio,” she adds. “She was 15, roughly my age, and she was working as a weaver in her spare time so she could buy a cell phone. If I had been born in a different life, that’s what I’d be doing. I had a lot of respect for her. The stuff she was weaving was really cool and I couldn’t do that. And to be able to say, ‘I bought this with my own money,’ people like her need more opportunities.”

Seeing her determination, Uy’s parents have been quite supportive. They augmented her small capital—savings from since she was little—and helped her find suppliers. The Loom Project makes bags and shoes using local weaves and, like her family’s apparel business, everything is made locally.

“I’ve been seeing these indigenous products in fairs, but there’s nothing people my age can wear or afford,” she says. “I’m trying to spread this same interest to young people like me.”

Her espadrille mules and slip-ons and mini totes of indigenous fabrics sport bright fringes, tassels and pompoms—fun, colorful, and we dare say, would appeal even to the titas of Manila.

In just a few weeks, Uy has turned over a profit, which allowed her to donate three looms in Kabankalan. Customers order via Instagram @theloomproject.ph, which she also runs. She has taken advantage of another stereotype about her generation: that Gen Zs are always on their phones. “I guess that has worked for me,” she says with a giggle.

An artist and painter who’s also the editor in chief of Winston Magazine, her school paper, Uy designs all the pieces with some inputs from her mom. She created the graphics and wrote the text for @theloomproject.ph.

It’s a lot of responsibility for a high school senior. But her parents are confident she won’t let her studies suffer. Uy, who has a younger brother, has always been responsible, they say. (The Uys declined to be named nor their brands mentioned in this article, so as not to distract from their daughter’s project.)

“I’m too much of a nerd. I love school too much,” Uy says with a laugh. And, her folks say, “She has always needed an outlet for her creativity.”

But Uy’s also just your typical teenager, who swoons over fashion and other girly stuff. She’s a cheerleader in school. Her designs for The Loom Project are named after her girlfriends.

“I just got super invested,” she says. “My adviser was telling me to stop, but this is not just a passing fancy. I know for sure that whatever I do in the future, I want to go into retail art. I always had that in me—I sold bracelets when I was 8—but I don’t want to just make art for the sake of it or for myself. I want to use it to give back.”

She recalls animatedly how she peppered Filip + Inna founder and designer Len Cabili with questions during a chance encounter in the mall. “I’m such a fangirl!” the young woman says.

Uy still runs to Mom and Dad for business-related stuff. “I got a message asking if I wanted to do consignment. What’s a consignment?” she asks, to which her dad laughs overhearing this. She’s also learning logistics. She just figured out delivery via Grab and is now learning overseas shipping since she has been receiving inquiries. In between her classes, she’s checking orders on Instagram.

Uy disagrees with some of the negative stereotypes of people her age. Not every millennial or Gen Z acts entitled, she says. “A lot of us want to do cool things with our lives because we realize that more than any generation, we are the luckiest, we have the most opportunities. It feels wrong to just sit on our hands.”

Her mom says it’s the parents’ duty to teach their kids social responsibility, “for them to see the other side of the picture and not grow up entitled. Not everything was handed to Gabby. She can only do the shoes and bags, not clothing, because she doesn’t have a big capital. The sales go directly to her bank account. She’s very lucky because not all kids have that, and she knows that.”

Uy is now hard at work completing her International Baccalaureate diploma and applying to universities, while also expanding her channels of distribution. She has received invitations for trunk shows. On Sept. 27-29, she will be at “Para8de” in Palm Grove, The Rockwell Club.

“When we give the communities the looms, we can increase the volume of production so we can sell more, and hopefully, sell in more places,” she says.

Her advice to people her age? “It sounds clichéd, but if you have a big idea, just go for it. There’s nothing to stop you but yourself,” Uy says. “When I made my first sale and I told my best friend, she said, ‘But isn’t that the point?’ I just couldn’t believe it … And also, be realistic. It’s a big commitment. You have to be willing to put in the time.”

Then she adds in mock exasperation, “These days, if I get six hours of sleep, that’s a good day.”