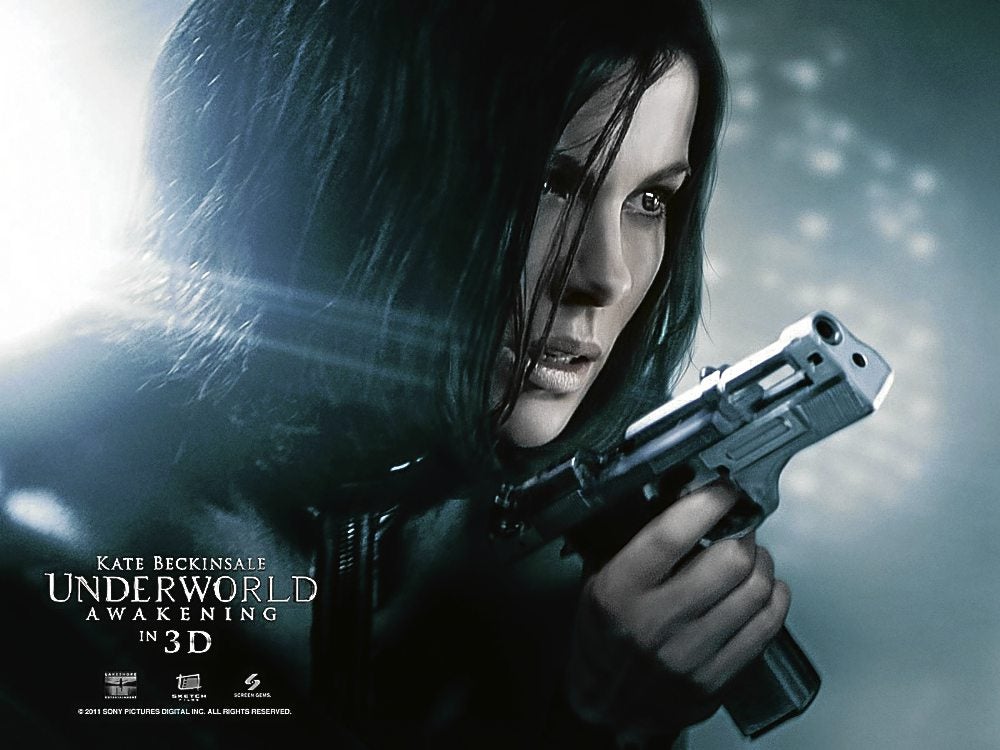 Kate Beckinsale returns in “Underworld: Awakening,” as the war between her brood and the Lycans (werewolves) continues.

In the fourth installment of the series, we find out that six months after the events of “Underworld: Evolution,” humans have discovered the existence of both vampires and lycans and initiate the Purge—a mass extermination of both species.

During the crusade, Selene is captured and placed in cryogenic suspension. Twelve years later, she escapes from prison and discovers that both immortal races are nearly extinct.

She also learns that she has a daughter, Eve (India Eisley) with hybrid Michael Corvinus.

Worse, the corporation responsible for her capture, Antigen, is actually run by lycans, led by Dr. Jacob Lane (Stephen Rea), and is developing an antigen that would make their race immune to silver, making them superior to both vampires and humans alike.

With the help of David (Theo James), one of the remaining vampires in hiding, and human detective Sebastian (Michael Ealy), Selene works to save the vampire race and prevent the lycans from dominating the world.

As compared to the previous films, “Awakening” is more of an action film that lacks a compelling narrative. Instead, we are treated to rapid-fast action sequences that seem to make up more than half of the film.

The filmmakers also took the violence up a notch as this installment has more blood and gore than the previous films. In short, while it lacks a real story, it more than makes up for it with the impressive and intense action scenes that were masterfully rendered in CGI. However, the same can’t be said for the addition of 3D, which the film really didn’t need.

It is great to see Beckinsale once again portray the femme fatale vampire Selene in her usual black leather suit back in a film series that missed her sorely during the previous film, “Rise of the Lycans,” the lackluster prequel to the entire series. She retains the cool, slick, tough-as-nails aura that has made her popular in the previous films, but also shows a certain level of vulnerability and emotion in certain instances.

Again, there’s no clear plot structure or ending in this one, but the battle scenes can blow us away, particularly in Selene’s final battle with a monster-sized lycan, something that could further pique our interest on the war between the two immortal races.

Overall, “Underworld: Awakening” doesn’t do much to advance the story, but it does add an exciting, chaotic, action-packed chapter to the war between the vampires and lycans. If the ending is any indication, then we may not have seen the last of Selene.