‘Bernarda Alba’ in English and Filipino: Which one succeeds? | Inquirer Lifestyle ❮ ❯ 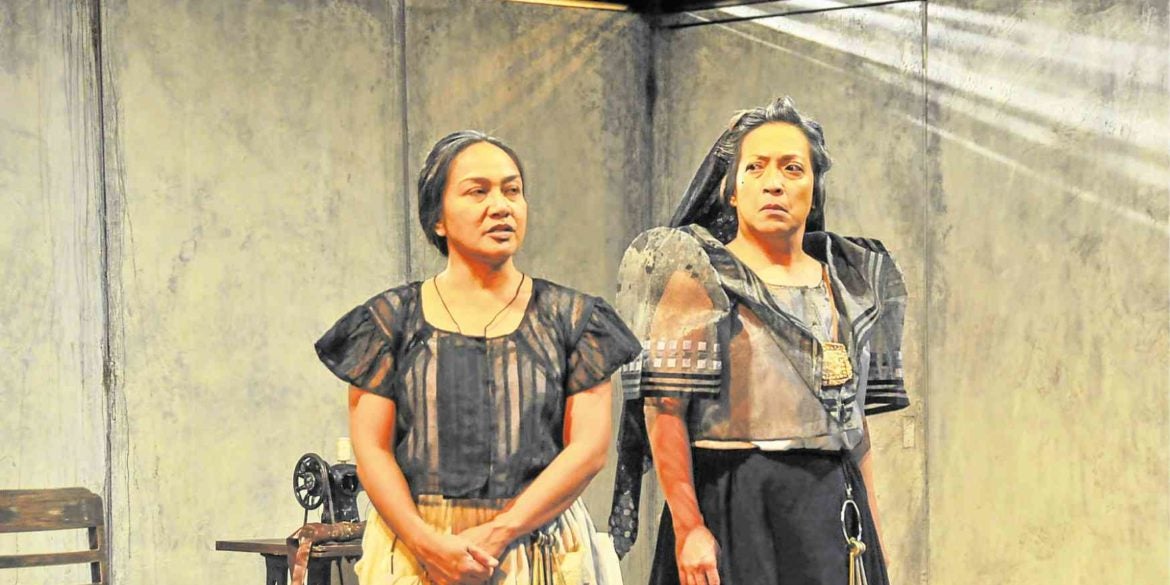 Stella Cañete-Mendoza (left) as the housekeeper Poncia and Frances Makil-Ignacio as the titular character in “The House of Bernarda Alba.”—PHOTO BY IRVIN ARENAS

‘Bernarda Alba’ in English and Filipino: Which one succeeds?

Neither realizes its full potential, but it’s their actors that save the day

Neither one realizes its full potential to be gripping family-under-fire drama. The model here is the telenovela—yet Cortez seems blithely unaware of that, choosing instead to tone down his productions in the many places where they would have benefited from a more theatrically amplified approach.

“Bernarda Alba” traps a family of women in mourning under one roof, the only male presence  a suitor who is never seen by the audience.

The play is structured as a series of barbed and sometimes high-octane confrontations—mother versus daughter, sister versus sister—yet Cortez rarely delivers the kind of dramatic tension achieved by, say, Repertory Philippines’ “August: Osage County” in 2014.

The English version, in particular, is a painful exercise in half-hearted anachronism: There is a visible attempt to make the performances look and sound like creatures of the past, inhabitants of the crumbling world evoked by designer Gino Gonzales, but the effort is oftentimes constrained. These actors, as shepherded by Cortez, are still very much of the present time—and acting in varying tones and registers at that.

There is also the matter of the script itself: Why the vestiges of Spanish expressions—and even a considerably lengthy passage delivered by one character in the language—when the point here is translation? How does this elevate the new text from the perspectives of both the actors and viewers, exactly?

Between the two versions, the Filipino is the more successful one. At least the entire cast is uniformly comfortable with the language, and the telenovela aesthetic is more clear-cut.

But both versions still highlight the tricky thing with anachronism—it has to be deliberate, or the whole endeavor will look like silly pretend-play. The same goes with the balance between drama and comedy that both productions struggle with: The comedy should be done really, really well—hopefully leaving the audience in stitches—so that the drama can land really hard. Failing that, you get a show that occasionally hits its stride, but never sustains its momentum.

It’s the actors who save the day in the end. The Filipino version features Gigi Escalante’s towering turn as the tyrannical matriarch (giving life to the adage “less is more”), with Gel Basa and Sarina Sasaki providing captivating presence as two of the daughters. (Sasaki is a luminous find in our books. She stands out simply by sounding the most natural and comfortable with the Filipino translation.)

The English version, meanwhile, has Frances Makil-Ignacio in an expectedly forceful turn as Bernarda Alba, but the most indelible performance belongs to Stella Cañete-Mendoza, who never, ever sags into predictability and all but disappears into the archaic time and place of the play, as the housekeeper Poncia.

Which brings us to a final thought: What exactly is the purpose of having the same actors perform both languages for such a limited run? This applies mainly to the actresses portraying the daughters—most of them are allotted only six performances in each staging, which is less than ideal time to fully master the demands of the play.

We are aware, of course, that this is standard practice for the company, to have actors perform in both languages, as it had done in its myriad productions that were in more than one—but to what end? The only acceptable end being a performance that masters the character in both languages, of course.