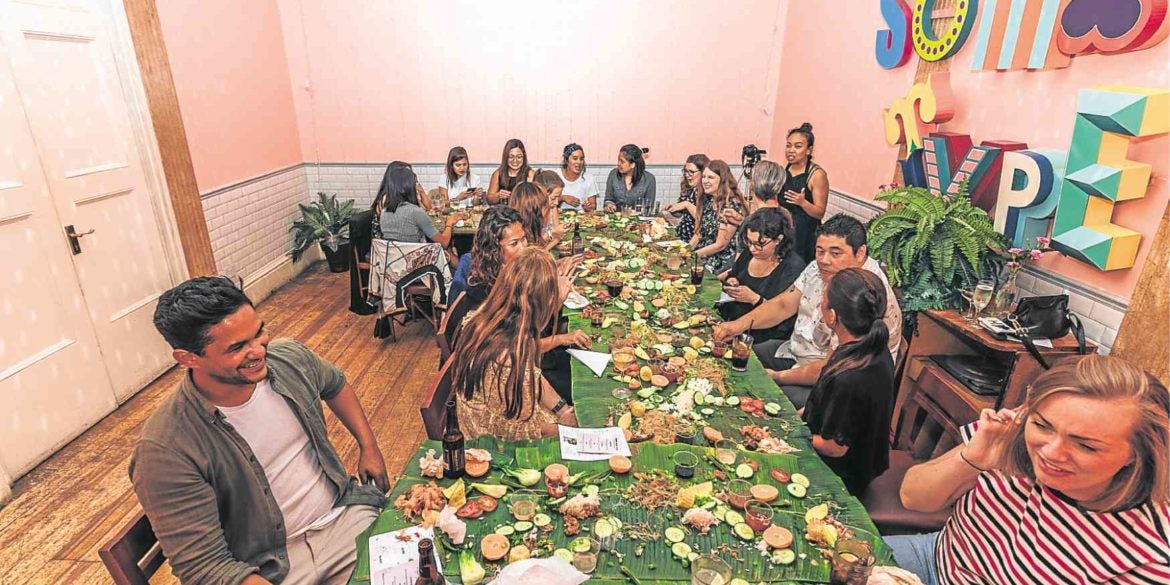 PHILIPPINE INVASION Filipino cooks and entrepeneurs have joined forces to promote the home country’s cuisine in the British capital and beyond. —foodwithmae.com

MANILA, Philippines — It was her frustration with the lack of good Filipino food in London that inspired Mae Magnaye Williams to start her supper club in 2013.

“I thought a supper club is the perfect platform for the British public to try Filipino food and for me to tell them all about it,” said Mae, who back then had a catering company that served Filipino-inspired canapés.

Mae, who was born in the Philippines and lived in Manila and Leyte before she moved to London at the age of 14, called her supper club — or underground restaurant — Pepe’s Kitchen after her late father who was a fantastic cook.

She conquered her fear of public speaking and, together with her husband Adrian, welcomed strangers into their home so they could spread the gospel of Filipino food and tell them about Philippine history while they feasted on dishes like humba, ukoy and ube ice cream.

“I don’t tweak the flavor for non-Filipino diners. I believe that anyone who eats Filipino food should taste it the way it should be. My food is regional, traditional and true to itself,”  Mae said.

“Many people say some of our dishes are too sour for the Western palate, but this is what makes our food our own and we should be proud of it! Do Koreans tame their kimchi? No they don’t, so why should we?”

Back then, Pepe’s Kitchen was the only Filipino supper club in London. Today, Mae’s supper club (now called Food with Mae) is one of a number of efforts to share the joys of Filipino cooking with the world. In London alone, there are more restaurants, pop-ups, food stalls and supper clubs now offering Filipino cuisine.

Brothers Mark and Mike Corbyn, who grew up in Hong Kong with an English father and a Filipino mother, launched The Adobros in 2013, after a brief partnership with Mae called the Kamayan Supper Club. Since Mark’s brother moved to Tokyo last year, he has been getting help from his wife and his mother in running the supper club.

Mary San Pablo, who used to be an assistant buyer for the popular British brand Topshop, left behind her fashion career for a life in food.

“I gave up a comfortable salary, plentiful free clothes and traveling to cut my teeth in London’s restaurant kitchens. It has been the best thing I have ever done in my life!” she said.

She started her supper club Luto London four years ago.

“All my dishes are recreated from memory of Filipino dishes I have eaten growing up and from my annual trips to the Philippines,” Mary said.

Her kinilaw (made using seasonal British fish), arroz caldo (including a version made with crab fat, chili and ginger), ube custard iles flottant and leche flan tart are always a hit with her diners. “I served dinuguan to a completely Western crowd recently and they all proclaimed it a triumph!” she said.

Maria Garbutt-Lucero, who was born and raised in Manila, works in the publishing industry promoting authors from around the world. In her spare time, she runs Baboy Club, which she launched last year. She likes serving her childhood favorites like sinigang na hipon, adobo, tortang talong, turon and lechon kawali.

The British and lechon

Lechon is always a star, of course. The Adobros serve lechon porchetta while Mae has even made her oven-roasted slow-cooked lechon belly alongside British food writer and TV presenter Mary Berry for her Easter Feast show for the BBC in 2016.

“It is a real showstopper. It is a great centerpiece for any occasion. The British love it as it is so much more aromatic than their famous roast dishes,” Mae said.

But Mary wishes that more people would be willing to go beyond lechon and adobo when trying Filpino food. “Our food, like all cuisines, is an evolving creature adapting to new influences and cultures brought to our thousands of islands,” she said.

While they find joy in feeding people of all nationalities, they agree that it’s most heartening to receive good feedback from fellow Filipinos.

Mark said, “A pair of Filipina sisters said the chicken barbecue skewers brought back such strong and clear memories of their late tito back in the Philippines who would always do barbecues on the beach with them. One of them said that she was nearly in tears, because the smell and the taste were just so evocative, and it was quite moving to think that we could do this through our food.”

It’s an exciting time for Filipino cuisine in London. “BBQ Dreamz won funding for a restaurant via BBC Two’s Million Pound Menu and Sarap is about to open a restaurant in Brixton Market this autumn,” Maria said.

Mae, Mark, Mary and Maria are all part of Filipino Food Movement UK (@filipinofooduk on Instagram), a collective of Filipino supper clubs, food stalls and restaurants who are working together to elevate Filipino cuisine.

“Filipino Food UK is the way that we are all coming together in promoting the food that we love,” Mark said. “Our desire is to ensure that Filipino food is not just a trend, not something faddy that people can use and abuse. We want to make ‘going out for a Filipino’ a common thing!”

It is their hope too that Filipinos everywhere will continue to elevate Pinoy cuisine.

Mae, who shares her recipes on her website FoodwithMae.com, considered it her “mission to inspire others to serve or cook Filipino food.”

Mark added: “I hope our future generations will continue to learn the basics and traditions of our food as well as show pride and share in their culture.”